There’s more content that pours out of the nearly bottomless digital world of skiing now than ever before. Riders and filmers across the globe unite to produce consistently high caliber edits, dropping them throughout the year. It leaves you with almost too much to sort through. Obviously this where your good friends at FREESKIER come into play, as you’ll find us serving up the latest eye candy that skiing has to offer on a silver platter. But even still, there’s a lot to dig through. We see new athlete edits and company facilitated films week in and week out, from almost every rider in the game. However, if there is one name out there that we would have no problem seeing much more of, it’s Duncan Adams.

His quiet and memorable style has been perforating the ski world for several years now, and perhaps it’s the fact that he’s so laid back with what he puts out that it makes these flicks all the more enjoyable. It’s like watching highlight clips of a unicorn that you know you’ll only see a handful of other times, if you’re lucky. To put it simply, Duncan is one of the best powder skiers in the world. It’s not about his technique or form, (even though both are pristine), but rather, it is his uncanny ability to see the mountain as a giant Hot Wheels track that makes him so enjoyable to watch. You can tell he’s having fun. ‘Loose Ends’ is no exception to this pattern of greatness. High speeds, big airs, slick grabs, it checks all the boxes. And with Jasper Newton behind the lens, and Brady Perron cutting this one together, you can rest assured it flows shot to shot as smoothly as melting butter finding its way down a stack of pancakes. Hopefully we’ll get another taste of some OG Adams skiing before next fall arrives and the ski movie shower begins. But if not, that just makes this all the more special.

Check out Duncan’s bio on the Faction website to learn about the mad snow marauder, and watch a few samples of what he has accomplished in his career. 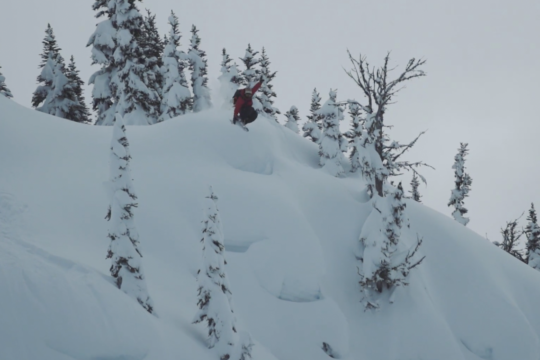