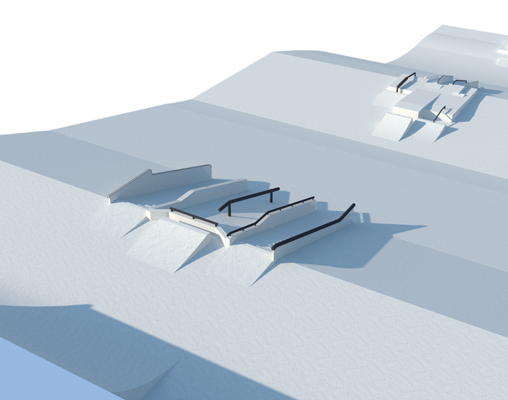 Following yesterday’s release of the proposed Olympic slopestyle course design, there has been much discussion among the athletes as to its quality. In an effort to gauge the general consensus, we reached out to some of the top slope skiers in the game—their impressions are below.

“I’m actually pleasantly surprised. It looks like they’ve included a good bit of variety and weather/snow depending I think it could be a quality course. Equal number of rail and jump features is also a plus.”

“I wish it was four jumps minimum, but I really liked the rail setups. Looks like there is room for creativity—just what our sport needs to have a chance of lasting contest wise.”

“As exciting as it is to get a preview of the course this far in advance, I kind of wish they would have kept it under wraps until closer to the event so it was a bit more of a surprise, and so that runs wouldn’t be so planned out. I will say that the rail options look really fun and technical, which is great, but I’m super disappointed that there are only three jumps. I think that for such a big event, having four jumps is crucial to allow the skiers to showcase every different direction of spinning [i.e. left, right, switch left, switch right]. A three jump course really leaves anybody as a contender and doesn’t necessarily demonstrate who is truly the best and who’s got the biggest repertoire.”

“I think the course looks sick. A bunch of different rail features and the size of the jumps looks perfect. I like that they show us the course this far in advance, because now we know what we need to practice on.”

“The layout looks really good, actually. Bunch of options on the rails up top, followed with three jumps, which I like a lot. Hopefully the Russians can pull it off!”

“I personally find it odd that they are releasing the course preview six months in advance. It takes all the surprise out of what’s to come. I am also shocked that there are only three jumps, I would have expected for them to emulate the X Games course a bit more, seeing as it’s the best course throughout the year, and includes four jumps. I’ll be curious to see how it actually all comes together.”

“Seeing the course just adds to the excitement. It looks like the jib features are going to be sick, which I’m totally down with.”

“Wow, to be honest I’m pretty surprised on the course layout. The rail options are a lot better than I was expecting. I was thinking it would end up being more like one, maybe two rail options per feature. But there is way more room to be creative and do something different than everyone else on this course—at least from the looks of it. I also think it’s rad that there are three rail features into the jump line. I think it’s good there are three jumps, but nowadays I believe a four-jump course can really separate the field trick-wise. Overall, I am still very impressed on what they have created.”

“The course looks like a pretty cookie cutter slopestyle course, but not in a bad way. With an event as big as the Olympics, it seems like it would be risky having any features too creative. This event seems geared towards being fair, predictable and easy to judge more than creative and progressive. It looks like people will be able to do a ton of crazy tricks and differentiate themselves easily on this course, so it’s perfect.”

“The Sochi slopestyle course has a lot of variety and is sure to test the athletes creativity and technical trickery. I can’t wait.”

“The course looks awesome and I am surprised by how creative it is. I think that three jumps is perfect, and it will make it a tighter competition. There is a lot of interesting options to choose from for the rail sections, everyone will get to be creative in their own way. I think that it will be a great show and a very nice first Olympic slopestyle contest.”

Stay tuned—we’ll continue to update this page as we get in touch with more athletes. What is the public saying about the new course design? Join the conversation on Facebook.