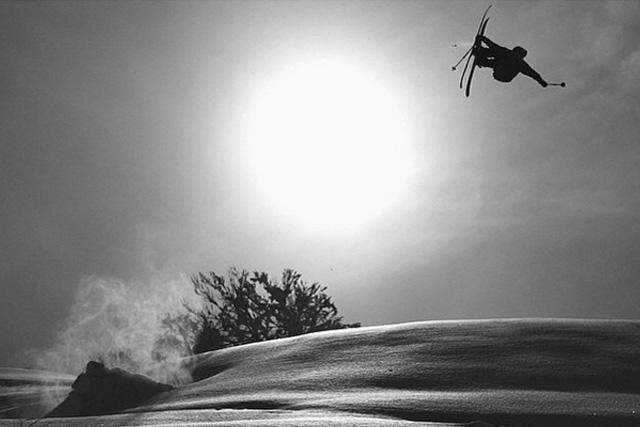 In a nutshell: KC Deane, Alexi Godbout, Max Morello, Vincent Gagnier and Josh Daiek have teamed up to produce a ski film, slated for fall ’15 release. With talent like that on the roster, the flick is sure to create a splash in this year’s project pool. The gents have been globetrotting all season long (albeit on different schedules) and they’ve been stacking shots left and right—they frequently tease us with snippets of footage via Instagram.

How did the idea come about? What can we expect to see this fall? I’ve been conversing with the gang via email, receiving updates from Japan, Italy, AK and everywhere in between. Here’s the sitch’…

Q: We’ll start with those of you who are in Japan right now—I believe that’s KC and Alexi? Guys, everyone and their mother is shredding Japow right now. Knowing that there will be a great deal of Japan-related content appearing in films this fall, are you trying to differentiate your game plan and content production strategy over there? — Boulder, Colorado, 2.11.15 @ 8:57 a.m. MT

KC Deane: I’m currently over here with Alexi and Morello. It is kind of hard to say, because you don’t really know what everyone else is doing. But we are just doing what we want to do and I think that our skiing and our styles will create different content from everyone else in Japan. I mean, some of the features and tricks that Max and Alexi are doing are different from what I’m looking at. For instance, Max has done some urban while we have been over here, and I’m not doing any of that. — Japan, 2.13.14 @ 8:21 a.m.

Alexi Godbout: As KC said, it’s kind of hard to know how hard the other crews are getting after it, but on our side we are pretty satisfied about how things are going so far. We’ve been hitting all kinds of different features, and built a jump to the moon called “Tokyo Banana.” Game plan-wise, we’re not trying to reinvent the wheel, just trying to make it spin better. — Japan, 2.13.15 @ 8:42 a.m.

Q for Vinnie Cash: You’re at the Frostgun Invitational right now. Do you feel like you have a target on your back after winning X Games big air gold? Has anything changed for you after this victory? — Boulder, Colorado, 2.11.15 @ 8:57 a.m. MT

Vincent Gagnier: No, not really. I still have to ski the best I can and hope to get a good score. I’m not changed, still the same Vin. Still hungry. Still watching ski movies every day, still thinking of new tricks. — Val D’isere, France, 2.12.15 @ 10:23 a.m. CET

Hey Henrik, sorry for the late reply. The Internet connection up here is touchy and it’s hard to even open emails.

Things were looking really epic coming up here. Terrace received record snowfall of two meters in 48 hours right before we arrived. Due to lack of visibility, our first day was only a half-day, but we were able to work a couple small tree lines and we were rewarded with epic, waist deep blower. Unfortunately, it began raining that night and hasn’t let up over the last two days… We’re kind of choked right now sitting in the lodge waiting for a clearing in the weather. Right now I’m just hoping wind and rain hasn’t completely hammered the alpine.

As KC mentioned, conditions are tough in North America this year. Definitely not ideal for filming, but at least there is snow and we’re skiing. It could be worse. I was lucky enough to be in Cham last week for the two meter dump that came through there, so I can’t complain at all. Other than that, I’ve been traveling from eastern Nevada, to Utah, to Jackson, exploring new areas and skiing new zones. New to me, at least… It’s been awesome. Skiing new terrain is the best. Overall, it’s been a kick ass season thus far! Stoked to be working on this project with such a versatile group of skiers. I’m really looking forward to filming with the boys and getting after it this spring. — Last Frontier Heli, 2.13.15 @ 1:53 p.m. MT

So many ski movies have inspired me. Watching old ski movies is part of my daily routine. First would probably be Propaganda, then The Game, then 13, then Subject to Change, then Union, then Assault, then X=Ten, then Session 1242… and so many more. Those are the top in my book… For recent movies the only one that comes to mind is Keynote Skier, Phil [Casabon] is simply the best. So many of my tricks are inspired from the early years of freeskiing. I want to show in Blank that you always have to think outside the box and must always have a good spirit while skiing. Never be mad. You don’t want to fall on the Dark Side of the Force.

4 thoughts on “Q&A: Epic shred in Japan, Italy and AK? See it all in “Blank.TheMovie””