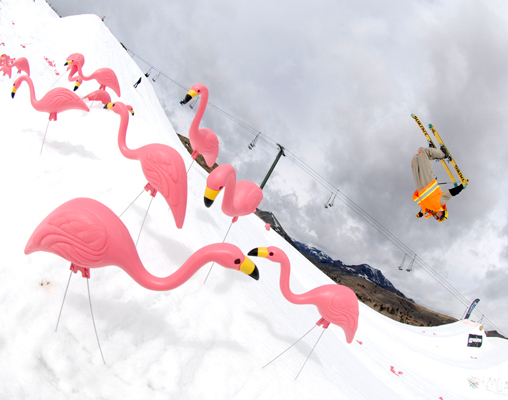 After a two-year hiatus, and months of anticipation leading up to this weekend’s festivities, the Orage Masters has just delivered—in a big way. We’ve spent the past 48 hours partying like rockstars here at Sun Valley Resort—and also enjoying a few organized activities, including a bowling extravaganza and a broom ball tournament—all the while looking forward to Saturday’s big show. And today, on Dollar Mountain, eight teams engaged in a hunt for big prizes and even bigger bragging rights. The result was a bash for the ages. An event hailed by many competitors as, “the best ever.” Following a day filled with flipping, spinning, drinking, choreographed hilarity, explosions and chicks in bikinis, it was Team Level 1 emerging victorious, with 4BI9 in second and Line Traveling Circus nabbing third.

Orage Marketing Director, Mike Nick, describes the current atmosphere at Sun Valley Resort like this: “It’s like a f#cked up college campus.” With all of the teams shacked up in a network of plush apartments—located behind the beautiful Sun Valley Lodge—it’s comparable to dorm life, indeed. Groups of costume clad skiers roam the well-manicured premises, never without an adult beverage in hand, each proudly representing their production companies—and for the sake of the analogy, it’s like they’re all repping their various fraternities.

So when we piled into the cars this morning, bound for Dollar Mountain—crisp, clean mountain air abound, and that good ol’ early morning calm still prevailing—I couldn’t help but feel like we were stars of some cheesy college flick—you know, where athletes gear up on a big game day, mist in the air, etc?

I snapped out of my trance as soon as we encountered Level 1’s Mike Hornbeck, dressed in his team’s construction worker get-up, planted in the middle of the road, beer in the hand, directing traffic toward the venue with a big orange flag. This was no ordinary game day.

After all, what sort of elite college athlete prepares for a big game by chugging beers in a parking lot at 9:00 in the morning?

Fueled up, the competitors took to the course for two hours worth of practice. While yesterday’s training session was fairly tame, the course had received a bit of a makeover overnight. Event banners adorned all of the features, and scattered about the hill were hundreds upon hundreds of pink, toy flamingos. The official mascot of this year’s Masters, there was also an inflatable flamingo the size of a car erected up near the cribs. The extra bit of decoration inspired athletes to get underway in a hurry. Plus, the weather was nice—a pleasant surprise as the forecast called for a mix of rain and snow.

Toy Soldier Productions (TSP) squared off against Line Traveling Circus (LTC) in the opening round. TSP—dressed as Army Forces—opened strong, with a handful of impressive doubles, and team member Khai Krepela proudly flaunting an American flag from start to finish. LTC—clad in pizza costumes—answered with some rowdy stunts of their own. One individual lay down on his back up near the top of the hill, skis planted firmly into the snow, while another proceeded to use the skis as a ramp and sent a massive backflip. A classic move we’ve seen from the Circus crew in a few of their popular webisodes. LTC really stole the show when they utilized a giant “pizza wedge” prop. Words can hardly do the stunt justice—so we’ll leave it to the photos and the videos (coming soon) to do the talking.

After the 20-minute jam session, the non-competing teams cast their votes by hoisting score cards for all to see. This would be the format throughout the entire day. And as it were in round number one, the teams were locked in a tie. A backflipping tie-breaker ensued, and LTC’s Andy Parry defeated TSP’s Shay Lee, propelling LTC to the next round and sending TSP back to the cribs for good.

Next up, the 4BI9 team—adorned in grass skirts, repping the Mahalo lifestyle—faced off against the Inspired Ganga Force. While Casabon, Perron, B-Paul and Deschenaux all skied well, 4BI9’s performance garnered the higher scores from the judges. Despite Inspired’s early elimination, all agreed it was an honor to watch Deschenaux compete. The skiing legend skied park for the first time in four years on Friday, and seemed especially pleased to stomp a trick he’d never done before: a 450 out of a rail. Who knew?!

Stept Productions—rocking the fast food theme—dropped in next versus the Level 1 “Constructions” squad. Sean J (the Burger King) and Clayton (a chicken) stomped some heavy tricks, but L1P’s slightly more orchestrated plan of attack proved too much for the Stept crew to handle. Mid-air construction cone bonks, double flips by LJ and Banks, hammers by Hornbeck and Logan—the crowd went nuts. Perhaps the most impressive stunt was LJ’s gap to grind on the base of Banks’ skis, who lay on his back midway across the table on jump two. LJ also stomped a switch 360 across the table, with a tail-tap on Banks’ skis at the 180 point.

Next, The Kids—certified rockstars, dubbed the Warriors—battled Me Gustan Aviones (MGA), who were dressed in ponchos and sombreros. While the MGA rookie squad came out of the gates charging—each of the four stomping a double flip on jump two in quick succession—the Kids answered with fire. Literally. The Canadian foursome doused a variety of objects on the course in gasoline (which they stored in Vitamin Water bottles) and set them ablaze. Fire seemed to trumps skiing in the eyes of the other teams, and thus, The Kids advanced. Tough luck for MGA—their skiing was phenomenal.

With four of the teams eliminated, it was time for the “halftime hoedown.” A representative from the ousted teams battled in a Chinese-downhill-style sit-ski race. First man to the bottom wins $1,000 cash for his crew. Shay Lee of TSP took the cake.

And then it was time for the semifinals. First up: 4BI9 vs. the Traveling Circus. The Mahalo bunch had acquired a veritable hype crew, who stationed themselves mid-course with inflatable palm trees and the like. They chanted, “Ma-ha-lo!” as their boys spun laps, hucking double backies and hitting massive transfer gaps. The tricks certainly looked nice with those grass skirts and straw hats blowing in the wind. LTC responded with another homemade prop: a sliding PVC jib setup, mounted on two pairs of skis. Despite the Circus’ best attempts, team Mahalo earned the higher scores, knocking LTC out of the running.

In the other semifinal matchup, The Kids battled Level 1. Level 1 stuck to its guns—skiing at an insanely high level. The Kids answered in classic Kids fashion: pausing mid-run to make out with a couple of cute ladies. Of course, Mr. Pettit also lit some more stuff on fire, despite the warnings of Mike Nick, who told The Kids they’d be disqualified if they continued with the fire antics. Pettit did not heed the warning, and The Kids were thus DQ’d—much to the dismay of the spectators. As announcer Luke Van Valin’s voice boomed from the speakers, confirming the disqualification, Pettit simply exclaimed, “F#ck yeah!” A testament to the break-all-rules attitude associated with The Kids, and moreover, the Orage Masters itself.

And with that, the final was set: Level 1 would battle 4BI9. The ousted teams gathered at the cribs—perhaps dejected on the one hand, but not overly so, because they could now focus on partying—and prepared to cheer on their counterparts.

Team Mahalo did as it had done before: big tricks, big gaps and more. Their cheering squad had truly taken on a life of its own during the finals—and you could sense spectators were cheering equally hard for the hype crew as they were for the athletes. Level 1 stuck to its crowd pleasing antics (again): big doubles, smooth spins, mid-air cone taps and more. The crowning moment of finals came when LJ Strenio sent a triple backflip over the second jump, bringing the trick to his feet, but washing out in the slush. The crowd went absolutely nuts—including all of the die-hard Mahalo supporters.

With the clock winding down, both teams dropped in for one joint train. Two teams, eight skiers, one happy family. It was awesome. Again, the spectators voiced their contentment.

And at the end of it all, my thoughts drifted back to the college campus analogy. The hill reminded me of a fraternity house front lawn on a Sunday morning: flamingos, hamburgers and chicken nuggets, confetti, traffic cones, hair wigs, caution tape, beer cans, Solo cups, pizza, pizza boxes, Hawaiian lays, beach umbrellas, streamers, human vomit, fireworks debris, and of course, the stench of gasoline was impossible to miss.

Awards came next, and the Level 1 crew were crowned the champions, taking home the coveted golden flamingo, the white jackets and a $10,000 cheque, courtesy of GoPro.

When asked about what went through his mind prior to sending the big triple, Strenio replied, “I was thinking, ‘I wonder how many flips I can do on this jump right here, and how cool it would be.'” And asked how it felt to stomp the maneuver, LJ stated, “I just thought, be like Travis Pastrana and run up the landing and claim at the top. But then I was feeling too drunk and tired to get to the top, so I settled for halfway up.” Spoken like a true Masters competitor!

“It was a total shit-show today,” said LJ. “This is exactly what it was supposed to be.”

Mike Nick confirmed, “the event was a pure spectacle, as always. Absolutely fantastic. I think we showed Sun Valley something they’ve never seen before, and something they may never see again, because we might not be welcome back,” he said with a chuckle. “But either way, first impressions are always lasting impressions. We crushed, killed and destroyed.”

Asked about a personal highlight, Nick explained, “it may sound corny, but it was the finals. It was probably the best finals ever, and the greatest part of it is when they all came down together, both teams, saying, ‘screw this contest, we’re going to put on a show.’ It was amazing. Beautiful. True camaraderie.”

Having never before been a part of the Orage Masters, it was an absolute pleasure to be a part of the madness today. The event surpassed expectations, and like the event motto goes, it truly is “the best scene skiing has ever seen.”

To conclude, I wish to say big thanks to Orage for bringing the event back this year. Also, thanks to Mike Nick and the Orage crew for taking incredible care of everyone this weekend. Thanks to Sun Valley for hosting us (sorry for partying!) and additional thanks goes out to the event sponsors: GoPro and Retallack.

For now, we’re off to the official after party at Whiskey Jacques in downtown Ketchum, where it’s sure to be raining champagne for hours on end. We’ll see how long the Level 1 crew can keep those blazers white in color…

*Stay tuned for video recaps in the days to come. For a listing of team rosters, check out Friday’s recap.