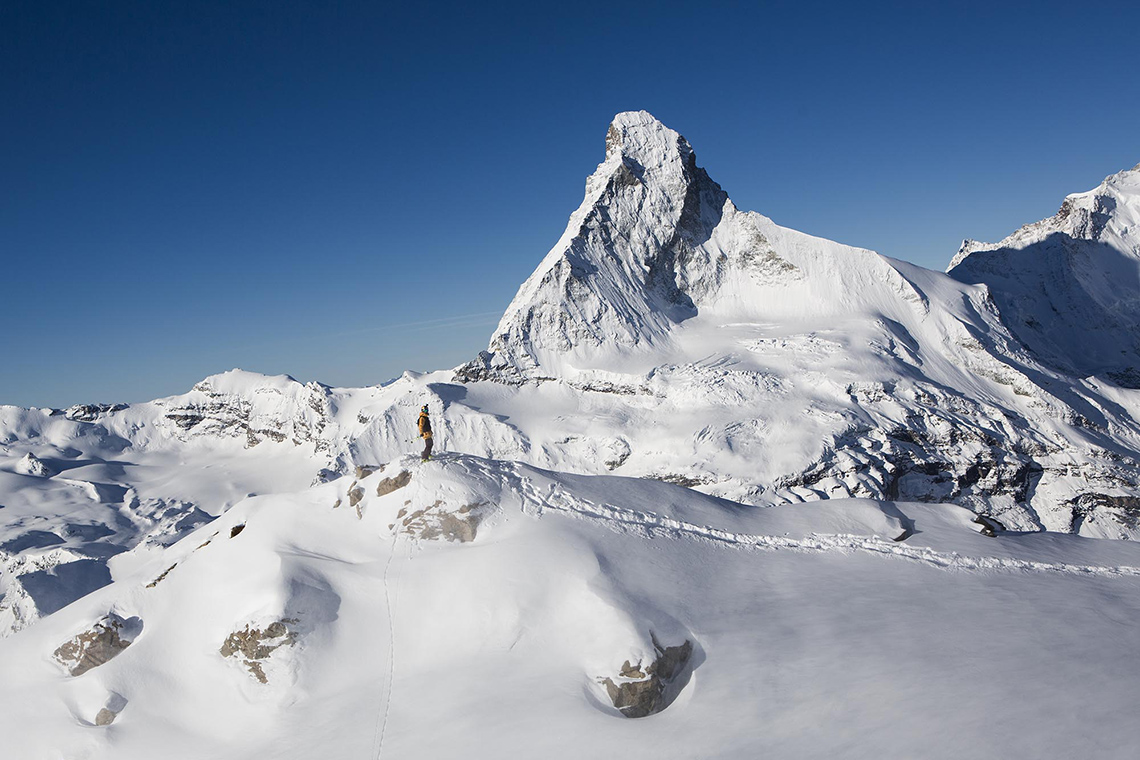 Last night, hundreds of passionate skiers flocked to one of Salt Lake City’s most popular event venues, The Depot, to enjoy the screening of Faction’s new film, This is Home. At the same time, 5,000 miles to the east, Faction premiered its flick in Paris, at the gargantuan Cinéma le Grand Rex—reportedly to a capacity crowd of 1,800. After months of anticipation and hype in the form of teasers, social media snippets and print magazine ads, the film is out and the viewers’ consensus is in: As expected, Faction has delivered a stunning film that showcases world-class skiing and sheds lights on the spirited personalities that comprise its sizeable athlete roster—a team of skiers that the Verbier, Switzerland-based ski manufacturer has thoughtfully grown and molded from its inception in 2006.

Indeed, Faction has made a deep investment in its athletes, and what is immediately apparent after watching this film is that Faction has masterfully supported skiers across the sport’s spectrum: From one segment to the next we’re treated to a mix of high-speed, hair-raising big-mountain skiing; deep powder and pillow-popping; mind-bending aerial acrobatics in terrain parks; and über-creative street-skiing. The film displays Faction’s commitment to serving—and producing skis for—skiers of all sorts. While the film’s segments vary in style and focus, masterful editing and camerawork tie the pieces together. The extensive use of drones is especially noteworthy, with aerial imagery providing unique vantages of the film’s finest action.

What follows is a step-by-step account of the film, and thereby, a spoiler. You’ve been warned!

This is Home, as advertised, takes us to the skiers’ hometowns (hence the film title) and local ski hills. In addition to serving up grade-A skiing performances on their home turf, the athletes also provide commentary on their upbringing. A few of the athletes address viewers in their native tongue, with translations provided via subtitles, adding a bit of worldly flair to the overall package.

Following a brief introduction that appropriately poses questions about notions of “home,” we venture to Montana’s Flathead Valley, where the snow is deep and the cliffs and pillows are plenty. Local boy Adam Delorme hosts teammates Duncan Adams and Tim McChesney and together the trio proceeds to ski with the trademark effortlessness that they’ve come to be known for. From double backflips to pillow-line-domination to slow-mo powder-snow explosions, the segment is chock-full of playful backcountry skiing that incites thoughts of mid-winter skiing bliss.

Next, we head to Jyväskylä, Finland, where Antti Ollila—the Olympian and celebrated Finnish skier who makes inverted and corked-out ski stunts look like a cakewalk—leads a street-skiing posse that includes Daniel Hanka, Tim McChesney and Alex Hall on a mission to turn every street corner and brick wall into proverbial blank canvases on which to paint their skiing masterpieces. Set to the tune of “Street Dance,” by Break Machine, the pace of this segment is fast and furious and the tone is decidedly fun. Intermixed with the skiing clips are scene-setting shots of local children who view the film-shoots in large groups and dish out high fives for stunts well-executed. We get a taste of life in the far North where the winters are long, dark and cold, and winter sports are an integral part of the culture.

The trickery of Hall, McChesney and Hanka is commendable and inspirational, yet Ollila’s skiing is perhaps the most memorable; he blends technicality and style in ways that few others can. The fact that he stands out during this segment does not come as a surprise—he does, after all, have home court advantage.

Making something out of nothing. Photo: Alric Ljunghager

They do it for the kids. Photo: Alric Ljunghager

Next, “Wasatch Mountains” flashes on-screen. At this mark of the film, the Utah-based skiers who last night filled The Depot provided raucous applause. The applause carried on from the segment’s start to its finish: Johnny Collinson, a native of Little Cottonwood Canyon, UT, and teammate Sam Anthamatten proceed to fire down steep lines and trick off of cliffs of all shapes and sizes. A cameo by Duncan Adams is not to be forgotten; “Dunc” skis down a mighty-narrow couloir in a flash, hardly putting his skis sideways.

The next segment is the stuff that dreams are made of. Rising star Henry Sildaru, 11, of Estonia—brother of 15-year-old Kelly Sildaru, the two-time X Games gold medalist in slopestyle and the youngest Winter X Games gold medalist, ever—trails freeskiing legend Candide Thovex at La Clusaz, the home and longtime stomping grounds of Thovex, in One Of Those Days-esque fashion. Mirroring Thovex’s famed web videos, the segment is void of music and is brought to life by amplified sounds of wind and snow. Thovex and Sildaru ski at high speeds and trick off of every bump and hump in sight, and each and every move is captured via follow-cam. For any youngster (heck, for any skier regardless of age) following in the tracks of Thovex is a once-in-a-lifetime experience, and the segment thus carries with it an air of significance. We appreciate the notion of Thovex, who has been at the forefront of the skiing conversation for nearly two decades, passing his knowledge and passion to a new generation.

This marks Thovex’s only appearance in the film; skiers know well that the man is equally elusive as he is talented on snow. 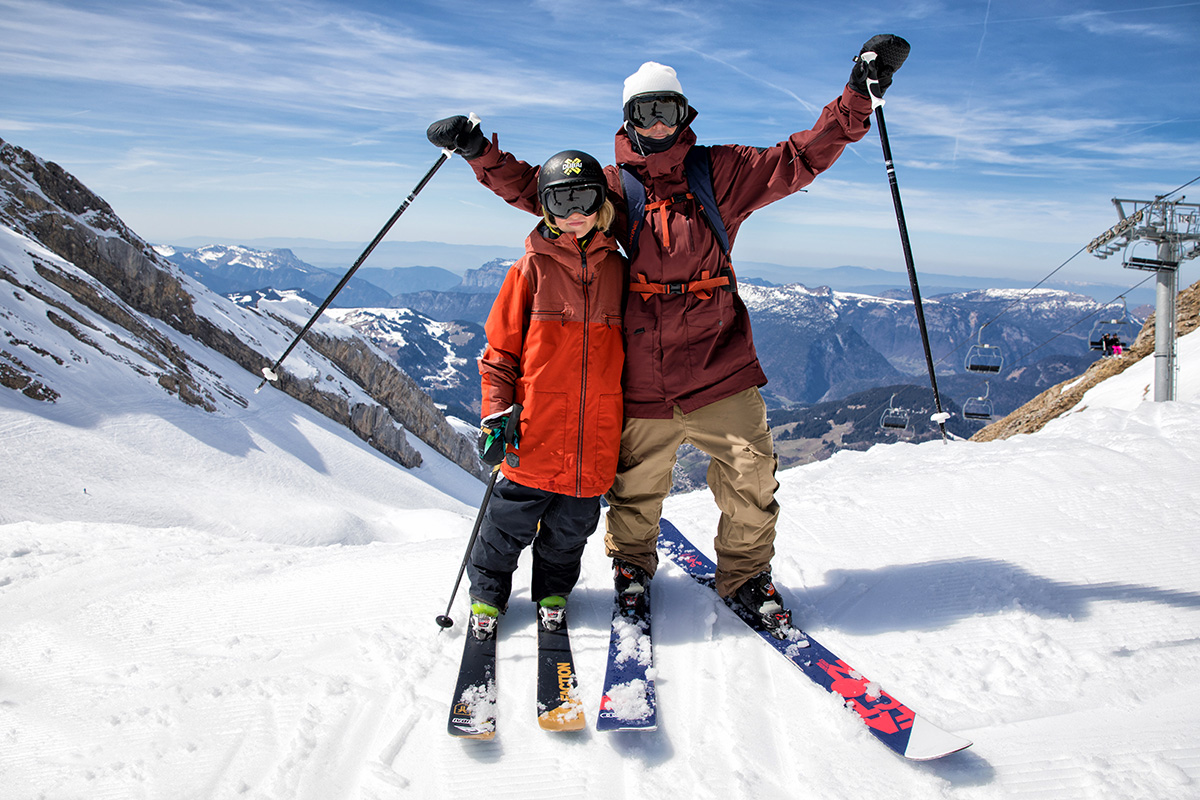 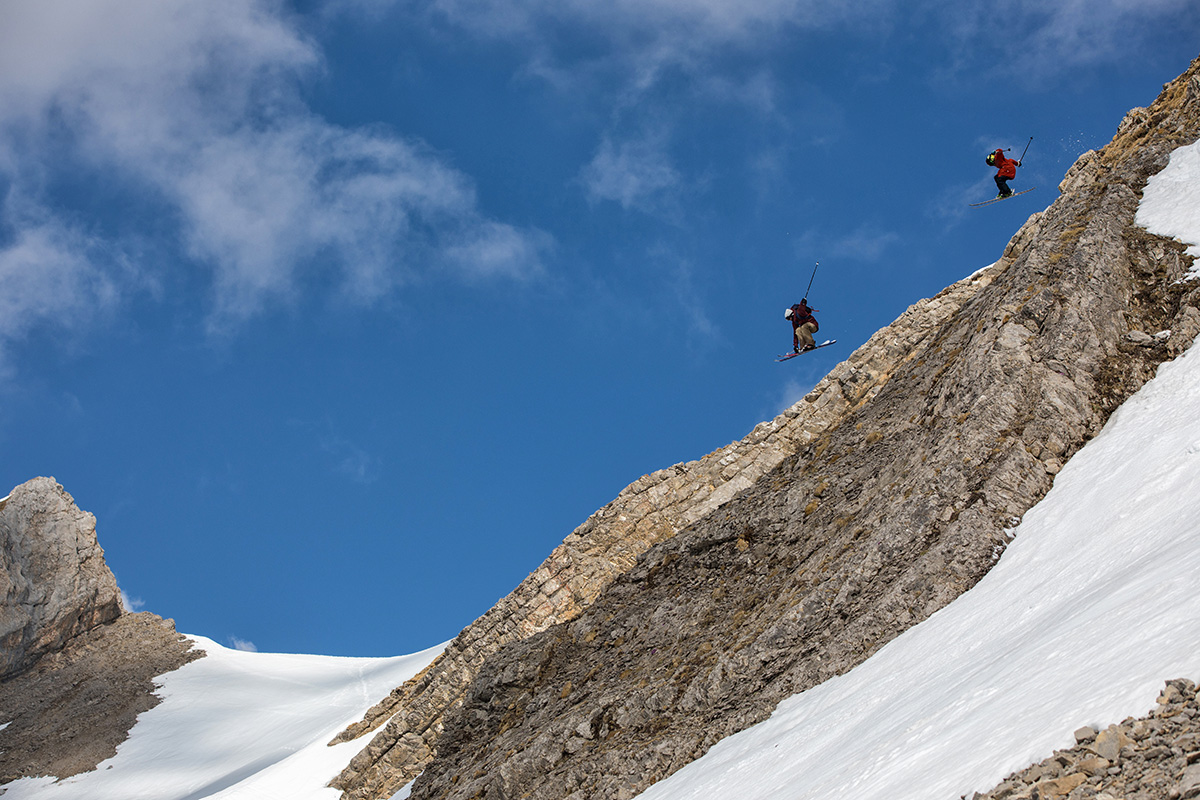 From the slopes of France we zoom to the Czech Republic, and the humble slopes of Deštné v Orlických horách. Here, Daniel Hanka—who sits on the sidelines for the duration of the shoot on account of an injured knee—hosts teammates including Eirik Sæterøy, Ollila, Hall, Mathilde Gremaud and Giulia Tanno. The fivesome perform an array of impressive stunts on a private jump. Watch carefully, because the skiers execute incredibly difficult maneuvers with subtle, cool confidence. Take Alex Hall’s corked-out 180, for example; where one might expect him to complete a full 360, he contorts his body in midair to reverse the natural forces of rotation. He’s one of just a few skiers to ever perform this stunt.

What follows is my favorite segment of the film. While Collinson hosted Anthamatten in the Utah backcountry, the role of host flips, and we see the two big-mountain skiers take on the formidable slopes of Zermatt—the place where Anthamatten was born and raised and where he’s completed nearly 200 days worth of specified training under UIAGM supervision, developing mountain guiding skills to complement his natural talent on skis. (Stay tuned for a must-read profile of Anthamatten in FREESKIER’s upcoming Backcountry Issue, hitting newsstands on November 7, 2017.) Anthamatten and Collinson ski surreally-large and absurdly steep mountain faces with speeds and fluidity that incite comments like, “Are you f#cking kidding me?” or “What, the actual, f#ck?” — two quips overheard in the theater last night, among other expletive-laden remarks. The skiing coupled with the raw beauty of peaks like the Matterhorn and Weisshorn make for an unforgettable segment.

Anthamatten and Collinson, with the Matterhorn in the distance. Photo: Tero Repo

Anthamatten has the need. The need for speed. Photo: Tero Repo

From Zermatt, we head west to Verbier—Faction’s home—to close out the film. There, Delorme, Adams, Ollila, the Sildarus, Hall, Sæterøy and McChesney ski at mach 10 and air off both natural and manmade jumps at every possible turn. Filled with slushy, springtime snow and emphasizing a pack mentality, it’s a segment that’s reminiscent of Faction’s web edits, dubbed We Are the Faction Collective, that ran between 2013 and 2016, racking up some two million views along the way.

Verbier in all its glory. Photo: Martin Bernard

On the whole, this is a film that deserves two thumbs up on its own merit. Considering this is a team-centric, feature-length film produced by a ski manufacturer—a rarity in this industry—only adds to its allure. Faction will host live screenings across Europe and North America, with at least 100 stops, and the company will also release the film online for free, via YouTube, in an effort to extend the film’s reach. The expected release date on YouTube is December 2017.

Kudos to the Faction family on a job well done.