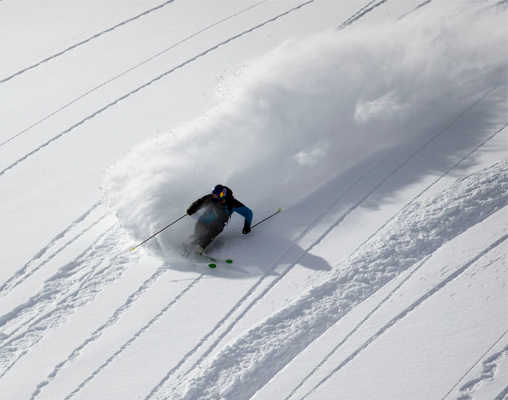 While part of the Freeskier team is posted up in Russia, bringing you the best Olympic coverage you can find, others on the team are in the San Juan Mountains of Colorado, testing out a plethora of new backcountry gear. Over the past three days, Silverton Mountain, along with the town itself, played host to Bent Gate Mountaineering’s Silverton Sick Days. The event brings out rippers of all kinds, for a private day on the mountain, heli skiing, backcountry touring and of course, nightly shenanigans at the local watering holes.

Freeskier first made the trek to Silverton Sick Days last year in an effort to expand testing of backcountry gear, and found that the event provides the perfect opportunity to test product and provide backcountry gear reviews in a variety of applications. As the line between alpine and backcountry gear continues to be blurred by products like boots and bindings that claim to do a little bit of everything, it’s increasingly vital to test them out in a number of scenarios. Some of the brands in attendance this year were Salomon, Icelantic, Black Diamond, Dynafit, Fischer and Flylow. In additon, we brought hard and soft goods from Atomic, K2, Scarpa, Roxa, Patagonia and Arc’teryx and BCA to name a few. As our posse of shredders got to work, athletes Michelle Parker and Chris Davenport joined in the fun and helped us tear up the mountain.

New snow has provided some of the best skiing Colorado has seen in a while, but instability in the snowpack has certainly been presenting challenges. Our crew spent significant time evaluating the snowpack before dropping in for some primo skiing on Red Mountain Pass and the guide staff at Silverton Mountain has been working overtime to open all their pow-filled terrain. Everybody’s efforts yielded some great time in the mountains and a chance to dig a little deeper into next year’s newest boots, bindings, outerwear and accessories.

And of course, with the stoke level on high, great days on the hill gave way to rowdy nights in town. On Wednesday, Icelantic hosted a good old-fashioned hoe down at the Montanya rum bar. The combo of delicious cocktails and a lively bluegrass band set the stage for an epic “jig-off.” Some stellar dance moves were thrown down and the winner walked away with a pair of shiny new Icelantic skis. Thursday night’s antics started at Grumpy’s, where Salomon and Red Bull threw a shindig to benefit the local search and rescue service, as well a few lucky folks who won skis from Salomon, prizes from GoPro and schwag galore.

Silverton Sick Days may be over for this year, but we’ll continue to hammer away on next year’s gear in order to separate the good from the great, and let you know what’s worth those hard-earned dollars.