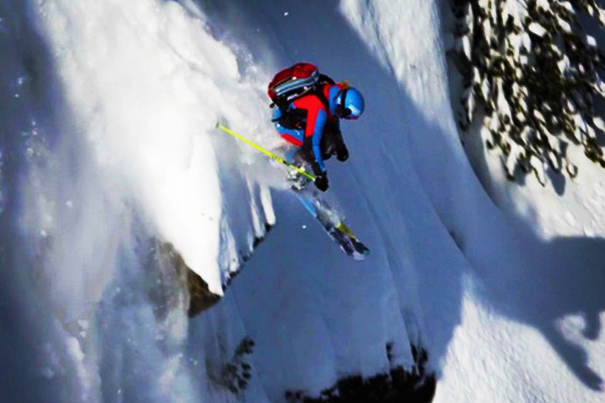 Following up on her 2013 film Shades of Winter as well as previous films As We Are and Shukran Morocco, Sandra Lahnsteiner’s 2014 film Pure is her fourth foray into the world of filmmaking. Lahnsteiner teamed up with Director of Photography Mathias Bergmann and director, editor and cameraman Mario Feil to put the movie together over the course of 2013-14. A background narrative runs throughout the film, a story of the childhood need to explore, express oneself individually, existing in the moment and maintaining mental composure in the face of experiences that instill fear.

With the story providing a bit of foundation, the film kicks off in Switzerland with Lahnsteiner, Matilda Rapaport, Janina Kuzma, Emma Dahlström, Silvia Bertagna and Camillia Berra. While Lahnsteiner, Rapaport and Kuzma take on big lines, Dahlström, Bertagna and Berra experience their first real backcountry shoot. Initially the crew, who are used to perfect park jumps and landings, struggles to deal with the different variables of landing off backcountry booters. After getting the hang of it, the women put on a show worthy of being the film’s opening segment.

From there, the film heads to Livigno, Italy and the 2014 Nine Queens contest. The Nine Queens castle provides an optimal playground for creativity and progression. Katie Summerhayes, Virginie Faivre, Grete Eliassen, Maude Raymond, Eva Patscheider, Julia Krass, Dahlström, Lisa Zimmermann, Bertagna, Keri Herman and Zuzana Stromkova get innovative in front of the cameras, launching themselves off the giant features with the Italian sun setting in the background.

Lahnsteiner, Caja Schopf, Nat Segal and Evelina Nilsson then head to Niseko, Japan to indulge in the absurd amount of snowfall deposited there each winter. The ladies display their affinity for getting inverted, throwing big backflips in the trees between faceshots. The film then segues to a ski mountaineering segment with Melissa Presslaber who attempts a solo ascent and descent of the Fletschhorn North Wall in Switzerland.

The movie rounds out with a segment in Haines, Alaska, where Lahnsteiner, Rapaport and Kuzma shack up at the Funny Farm, a family owned lodge located close to the town’s heliski operation. The segment explores the risk and reward of skiing the big lines that Alaska is known for, including a scary run-in with an avalanche for Rapaport, and proves these three rippers have the skills to shred just about any line that’s thrown at them.

With Pure Lahnsteiner continues to display her skills to the world both as a freeskier and a filmmaker, as she tells a unique story through skiing, words and top-notch cinematography.