If skiing is about having a good time, then Sandra Lahnsteiner and Janina Kuzma are the perfect role models. For “Crossroads,” the latest release from the team at Shades of Winter, the two friends converged on British Columbia, Canada, to get some lighthearted laps in between major film projects and freeride competitions.

After spending two years filming, directing and editing Between, Shades of Winter’s feature-length release in 2016, it was about time for Lahnsteiner to take a deep breath. “For the first time, I didn’t pitch [this idea] to any sponsors, there was no plan, no production budget,” explains the Austrian filmmaker and freeride athlete. “I, personally, was quite tired after filming the last Shades of Winter film, and I was not ready at all to take any responsibility on a project again.”

Encouraged by her Kiwi friend and 2018 Olympic halfpipe competitor, Janina Kuzma, to go on a ski vacation—a trip without the seriousness of a big film project—Lahnsteiner flew from her home in Austria and the skiers met up in Golden, British Columbia to conquer sled-accessed, bottomless pillow lines and indulge in the simple joys of skiing.

“In particular last year, with Matilda [Rapaport] passing away… we felt like we needed to go skiing for the fun of it, to do it for Matilda,” explains Lahnsteiner. “So, we agreed: there will be no pitch, no production, no plan, no partners.” The result: Eight minutes of happy-go-lucky skiing, starring two of the most talented women in the sport. Sit back and let the good times roll with Lahnsteiner and Kuzma in the latest Shades of Winter short. 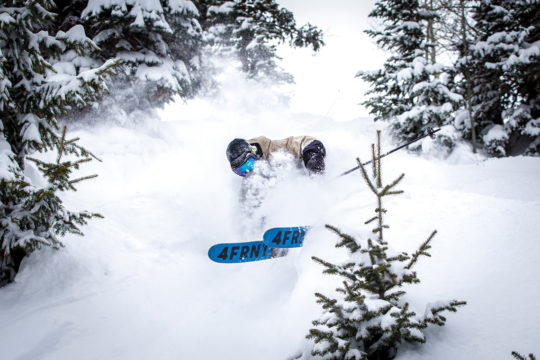