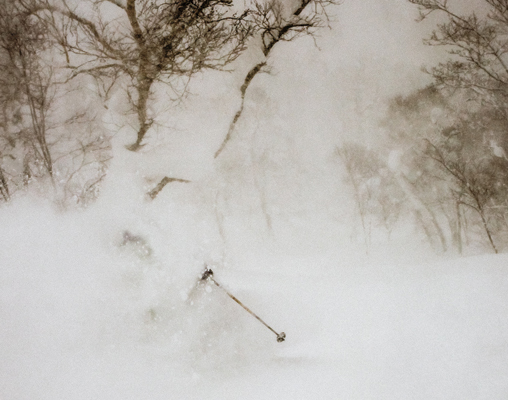 Freeskier explores two sides of Japan and two sides of skiing through the wild and frantic street stylings of Level 1’s jib crew and the classic pow-shredding of Nimbus Independent.

This article is featured in the December issue of FREESKIER. We present it on the web in two parts: Nate Abbott’s account of Nimbus’ trip—shown here on this page—and Chris O’Connell’s experience with the Level 1 crew, just one mouse-click away.

It’s constant, the rhythm of sound and silence. A calm voice rings out over a vast resort, muffled by fat flakes of snow. After five seconds of silence, it begins again.

The loudspeakers that hang from lift towers, buildings and trees play music in some places and repeat announcements and warnings in others. Fleets of greeters and helpers splash “ohaiyou gozaimasu” and other phrases against our ears over and over again, even when we can’t see who is talking. The reverberation condemns the phrases, whether in Japanese or English, to fade into our subconscious.

Japanese culture can be so calm, so controlled; yet there is a huge amplification of every message through repetition. You find warning signs, with their cartoon characters and loose translations, at frequent intervals. A hundred different kinds of instant coffee line the walls of the Seicomart, and thousands of those stores are spread over the island of Hokkaido. The bows that are so special and personal on your arrival in the country become nearly invisible, reflexive movements like the feeding of a pigeon.

And the snow, well, it barely surprises you when, for a sixth morning in a row, you wake to see it has coated the mountain. The flakes fall and fall. And your tracks are made and disappear, run after run, as physical echoes.

In January of 2012, two groups of skiers and two of Freeskier’s senior photographers went to Hokkaido and experienced these echoes. They also served as echoes of skiing itself. The Nimbus Independent crew has graduated from the contest scene to a distinct style of far-flung exploration combined with freestyle tricks and deep snow. And the Level 1 crew, with a young street-focused group for this trip, took advantage of the same deep snow to toss themselves down handrails, onto transitions and over stairway gaps. Skiing transformed through age and circumstance.

In these stories, you’ll see our vision of these echoes of Japan and of skiing through the wonderfully deep snow that graced Hokkaido during early 2012.

Part I: Snow Traditional (Gallery Above)

Words and photos by Nate Abbott

Year after year, the Nimbus Independent guys head to Japan after the New Year turns. In January 2012, I finally had the chance to join them and learn some of their secrets to the area.

I arrived a couple of days after the rest of the crew—skiers Pep Fujas, Eric Pollard, Chris Benchetler and Andy Mahre, and filmers Justin Wiegand and Ike Smith. Immediately you notice the cultural difference in Japan, the respect shown by every Japanese person I crossed paths with, down to the ground staff at the airport.

And after two days alone with my bags and iPod, I arrived at about 4 p.m. to an empty cabin in Niseko. Luckily, the merry band of Nimbi came through the door less than 30 minutes later, still amping from an amazing powder day, and told me to gear up. Thirty minutes after that, I snagged the [first image featured in the gallery above] on my second shot of the trip. The snow was as good as it looks.

*This article originally appeared in the Volume 15 November issue of FREESKIER. Subscribe to the magazine, or get it on the iTunes Newsstand.

1 thought on “Japan, Deeper and Deeper Part I: Nimbus gets pitted on Hokkaido, early 2012”