Mt. Shasta is a magnificent stratovolcano that reaches 14,179 feet above sea level on the southern edge of the Cascade Range in California. A meaningful mountain to many for its physical and spiritual presence, there couldn’t be a more perfect line for Cody Townsend to cap off his first year of The FIFTY, attempting to ski all 50 Classic Ski Descents in North America.

Joined by a motely crew of friends–Scott Gaffney of Matchstick Productions, professional skier Michelle Parker, childhood friend and ski patroller Kyle O’neal, mountain guides Jeff Dostie and Brennan Lagasse, journalist and ex-Telemark champion Megan Michelson and adventure photographer Ming Poon–Townsend and videographer Bjarne Salén set out on line 21 and the last line of the season. What Mount Shasta may lack in technical difficulty, it certainly makes up for in its 7,000-foot climb and, subsequently, 7,000-foot ski on delectable spring corn in picture-perfect conditions. High fives, smiles and Hawaiian shirts were no shortage for this late-season mission. 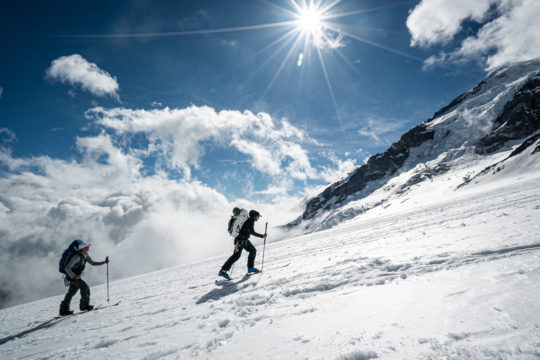