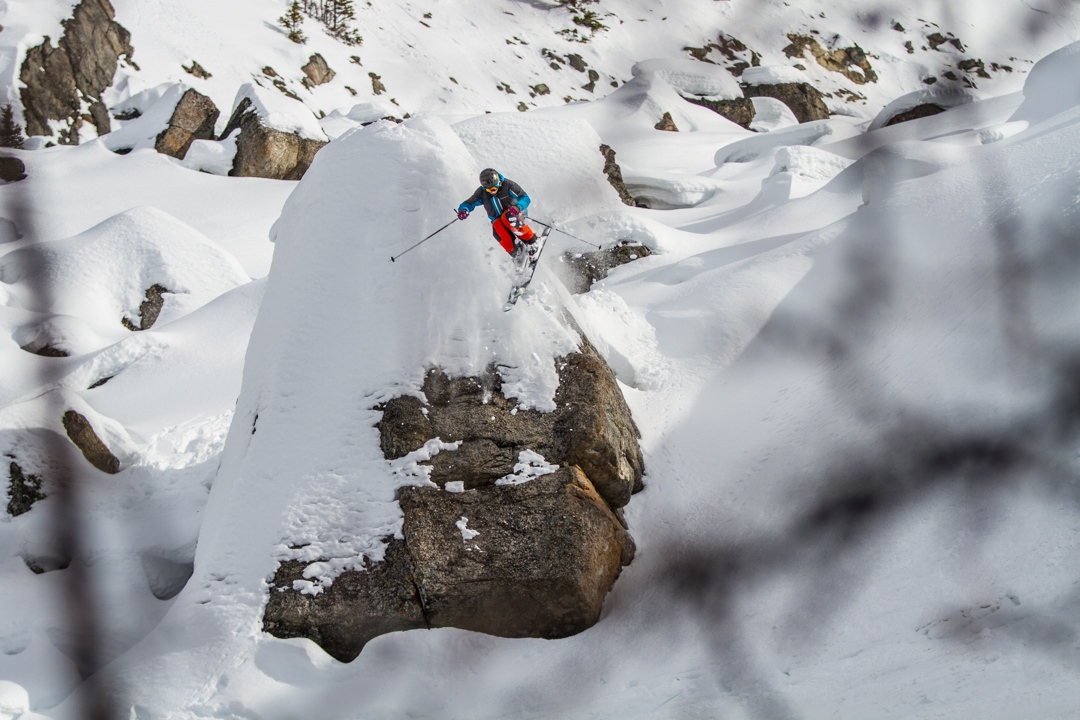 We sat around drinking Kokanee beer and verbally reliving our day on the hill, basking in the company of some newfound shred buddies.

“You sent that to the moon, dude.”

“Seriously, you’re almost out of the frame here.”

“We were kind of surprised when you opted not to speed check,” I add.

A gratifying finish to another outstanding ski outing. Ellefson and myself were on a trip to Banff National Park in Alberta, Canada, just last month, rounding out the second day of our trip over some brews in the Lodge of the Ten Peaks at Lake Louise Resort. With us are Banff locals Noah Maisonet, Carter McMillan, Keegan Capel and Vince Goyette. We’ve known these fine young gents, all in their early twenties, for a brief time but we’ve already come to respect their status as fellow members of the skiing fraternity, as well as the mountain town they call home.

When Sherpas Cinema—Banff natives themselves—came to town last year to film for the Sculpted in Time series, they didn’t have to look far for local talent.

The jagged peaks of Banff National Park have sculpted a strong contingent of skiers across the region. Far more dramatic than their southern counterparts, these mountains have been exposed to heavy glaciation over time, helping to produce steep, rocky lines that spread throughout Sunshine Village, Lake Louise Resort and Mt. Norquay. These resorts mold skiers that act as billy goats, navigating exposed terrain as if it were a bunny slope.

“[Sherpas’] reputation, along with the passion they put into their work, really inspired me to ski the best I possibly could,” says Maisonet.

And ski his best he did. Perhaps the most iconic shot from all four Sculpted in Time videos comes in “The Wise Man,” where Maisonet throws a big 360 off the top of the Cliffhouse above the North American chair at Mt. Norquay.

“Spending a lot of my childhood at Mt. Norquay, I always thought it’d be cool to jump off the Tea House [now called the Cliffhouse Bistro],” explains Maisonet. “When the Sherpas mentioned that Norquay was allowing us to send it, Keegan and I jumped on the opportunity. Definitely one of the bigger 3s I have ever thrown.”

3 thoughts on “Banff, Alberta is a badass big-mountain arena; Meet the rippers who call it home”