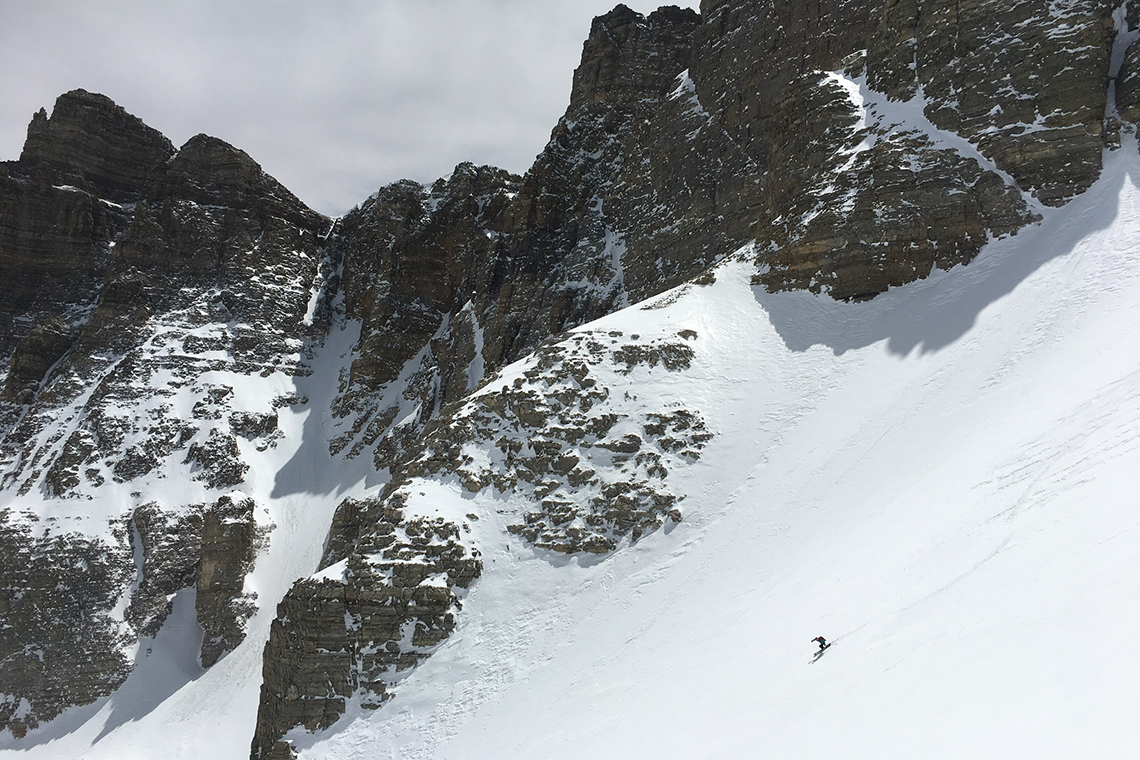 When it comes to skiing in National Parks, the usual über-trafficked suspects—Rocky Mountain, Grand Teton, Mount Rainier and Denali National Parks, for example—get all the hype, and for good reason. But in honor of National Parks Week 2018, I feel it is my duty as a skier, seeker of type-two fun and spreader of stoke to clue you in on a secret zone that I’m fairly positive the locals of Baker, Nevada will have no problem with me unveiling. As one of the National Park System’s least visited, youngest, and more remote members, Great Basin National Park (GBNP) is a backcountry skier’s paradise and should absolutely be the destination of your next manic ski adventure.

GBNP, located in rural Nevada right near its border with Utah, was established on October 27, 1986 and gets its name from the 200,000 acre area known as the Hydrographic Great Basin, which encompasses parts of four states where all water drains inward instead of to an ocean. The park’s 77,180 acres reside in the Great Basin Desert, the only “cold” desert in the US, which means the majority of its precipitation falls in the form of snow. This desert is formed by the rain shadow effect of the Sierra Nevada and Cascade mountain ranges. This diverse zone is home to the Wheeler Peak Glacier, which sits at 11,500 feet and is the only glacier in Nevada. As if this place wasn’t already cool enough, it’s also home to some of the oldest bristlecone pine groves in the world with trees up to 5,000 years old.

To be completely honest, I had never heard of this hidden gem until a week before I skied off its highest point at 13,065 feet. My buddy, Adam Moszynski—founder of Corbeaux Clothing—sent me a text saying that he had three days off and wanted to hit the road to ski where no one else would be. I was, of course, intrigued. He pitched me on skiing Wheeler Peak, the centerpiece of Great Basin National Park, which is the tallest independent mountain in Nevada, and the twelfth most prominent peak in the contiguous United States with 7,563 feet of relief. I agreed immediately, crossed my fingers and sent out a flurry of texts in attempt to shift some things around at the restaurant I work at.

We arrived at the Upper Lehman Creek Campground around 7 p.m., the evening before our ski attempt of Wheeler Peak. Much to my surprise—since I did zero research about winter closures and such—this was our starting elevation at 7,752 feet. The forecast for our adventure was looking bleak. The NOAA point forecast for the summit was calling for temperatures as high as 60 degrees Fahrenheit and winds with gusts as high as 55 miles per hour. After an ultra-long drive and getting strong-armed by the winter closure, it was safe to safe our enthusiasm was slightly dampened. In summer, the road continues another 10 miles to the Wheeler Peak Campground at an elevation of 9,885 feet, which makes a summit day a whole lot more digestible.

With a big day ahead, we settled into our sleeping bags and set the alarm for 5 a.m. 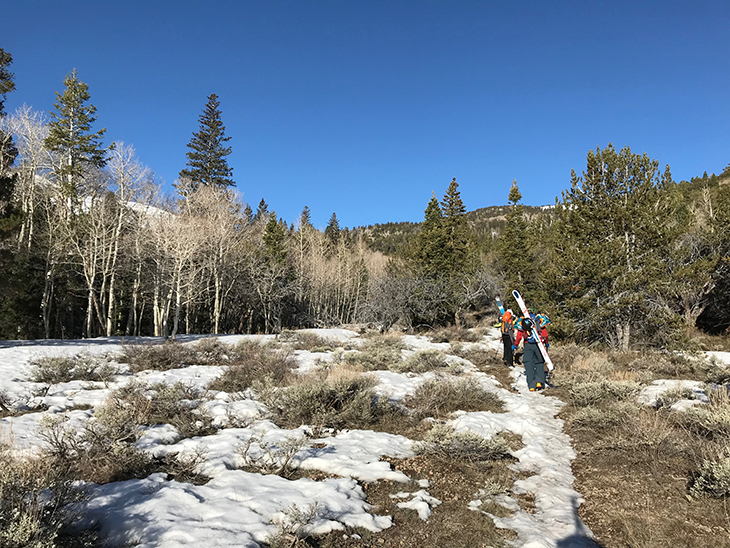 The alarm was met with a significant amount of reluctance—I’ve never seen a group of three move so slowly around camp. While searching for practically any reason to bail, we sluggishly fisted gear into our packs and drank coffee hoping each sip would re-ignite our normal levels of stoke when faced with a day of skiing. Our sad display of motivation left us crawling away from camp almost an hour-and-a-half after the initial alarm and a little behind schedule, but nonetheless, with each step we were making progress. 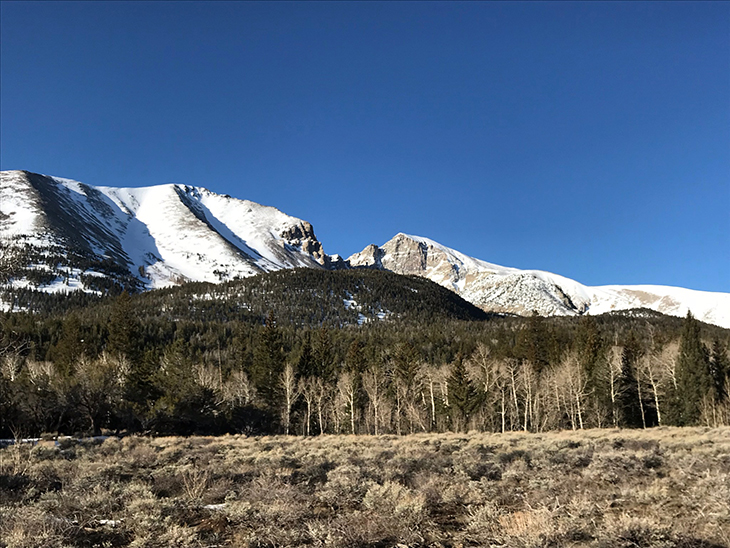 Once we got moving, the total absence of other humans and the serene, almost yellow brick road-like hiking trail that peacefully winded through pinyon, ponderosa and juniper quickly reminded us why the morning’s alarm was set in the first place. Luckily, the snow line was lower than we expected and our progress ramped up once we slapped on our climbing skins. 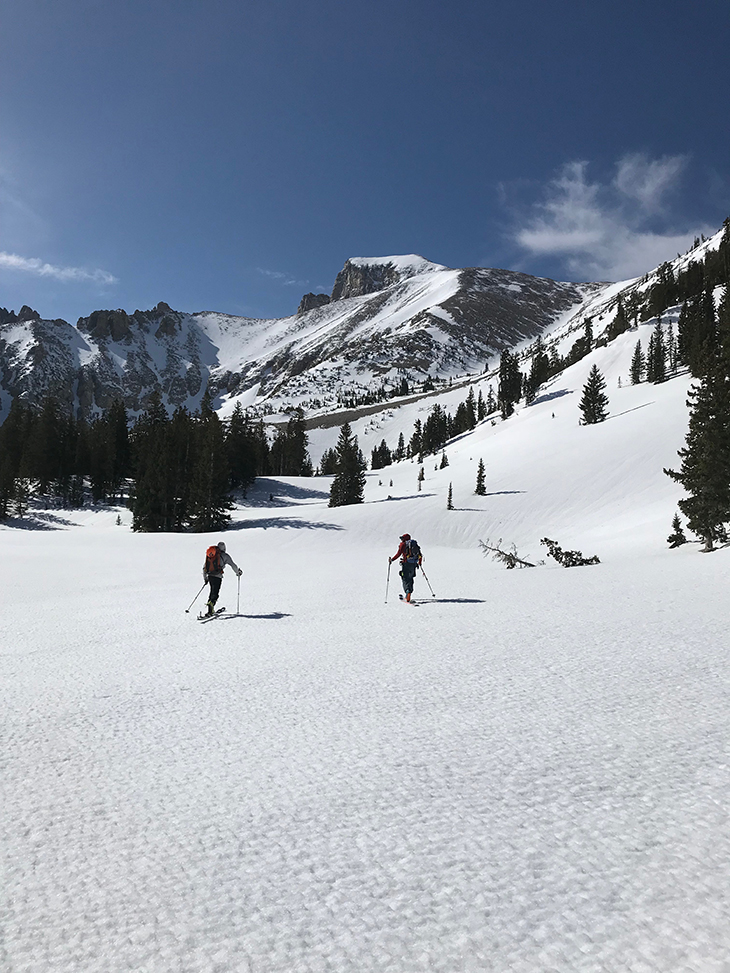 The north gully comes into view just under the clouds in the upper right of the photo. Photo: Nat Houston

Once at the Wheeler Peak Campground, a north-facing gully came into view that appeared to be far more direct than the summer trail and would cut our approach time. This 1,000 foot shot was melted out on either side; perfectly wind buffed; just steep enough to punch straight up, while still gaining purchase from our skins; and was protected from the persistent howling of the western wind. It was one of many silver linings of the day. 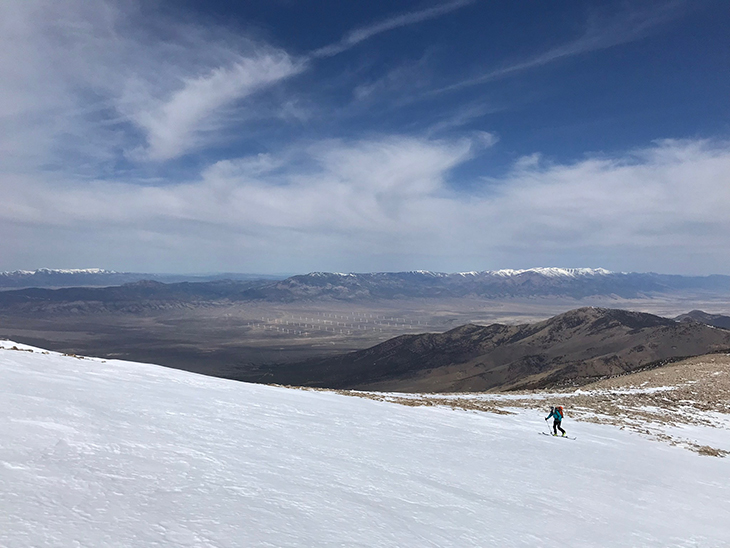 Chason tops out the approach gulley and the views are almost endless. Photo: Nat Houston

Before we knew it, we joined up with the summer trail, and as we crested the northwest summit ridge, we were greeted by insane views of the Great Basin roughly 7,000 feet below. A massive wind farm, crop circles, vibrant shades of green and yellow and many isolated mountain ranges jutting up from the desert as far as the eye could see made for an martian-esque backdrop. We all stopped to take photos, submitting to the hammering winds while gazing out at our amazing surroundings. 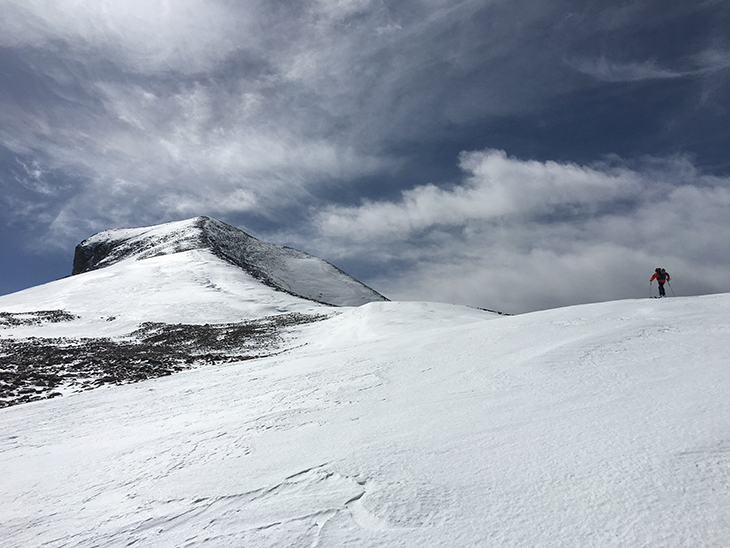 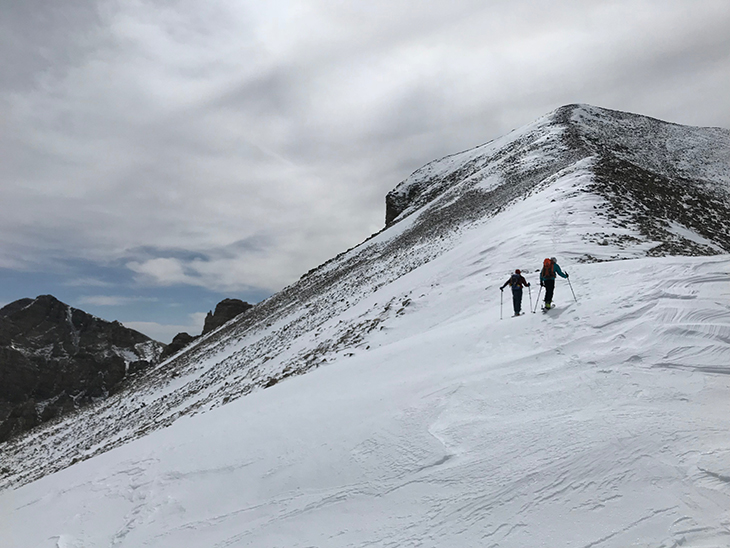 Chason and Adam on the summit ridge. Jeff Davis Peak peaks its head up on the left. Photo: Nat Houston

The final 1,000 foot push to the summit was straightforward but forced us to lay a convoluted skin track as we executed frantic switchbacks in the exposed talus to minimize the struggle of booting up a thin, rotten and wind scoured snowpack. The distance between the three of us lengthened as we each chose our preferred path of navigating the frustrating terrain. 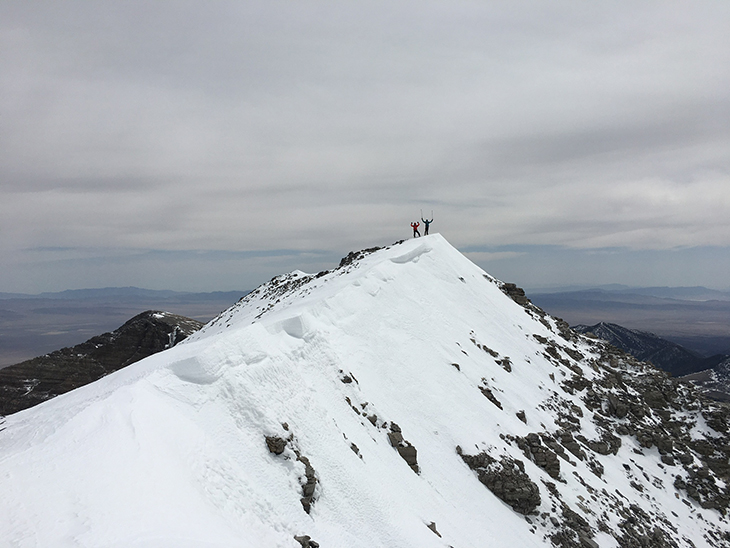 Nat and Chason on the summit. Photo: Adam Moszynski

Approximately four hours after we slothed away from the truck, we reached the summit of Wheeler Peak and the winds subsided as if the Park was rewarding us for our hard work. We enjoyed a blissful 20 minutes of snacks, high-fives and pristine views of all that Great Basin National Park has to offer. We took selfies and scoped epic looking lines on the two most prominent neighboring peaks—Jeff Davis to the east and Baker to the south. One could truly spend some serious time tackling rad lines in this gem of a national park. 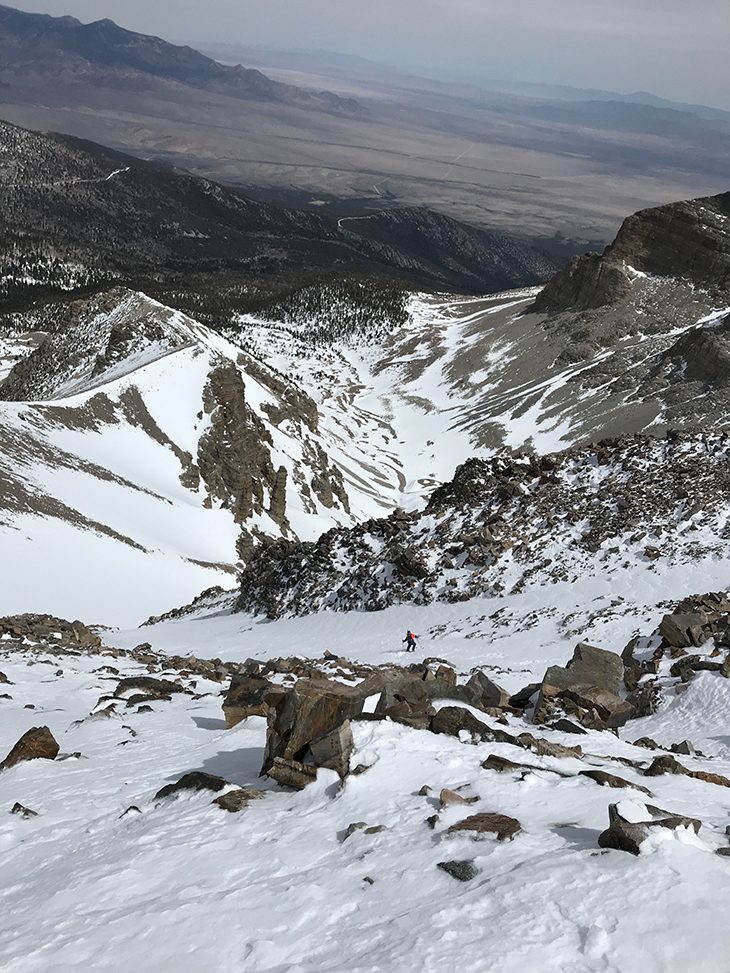 Adam hopping his way down from the summit.
Photo: Nat Houston 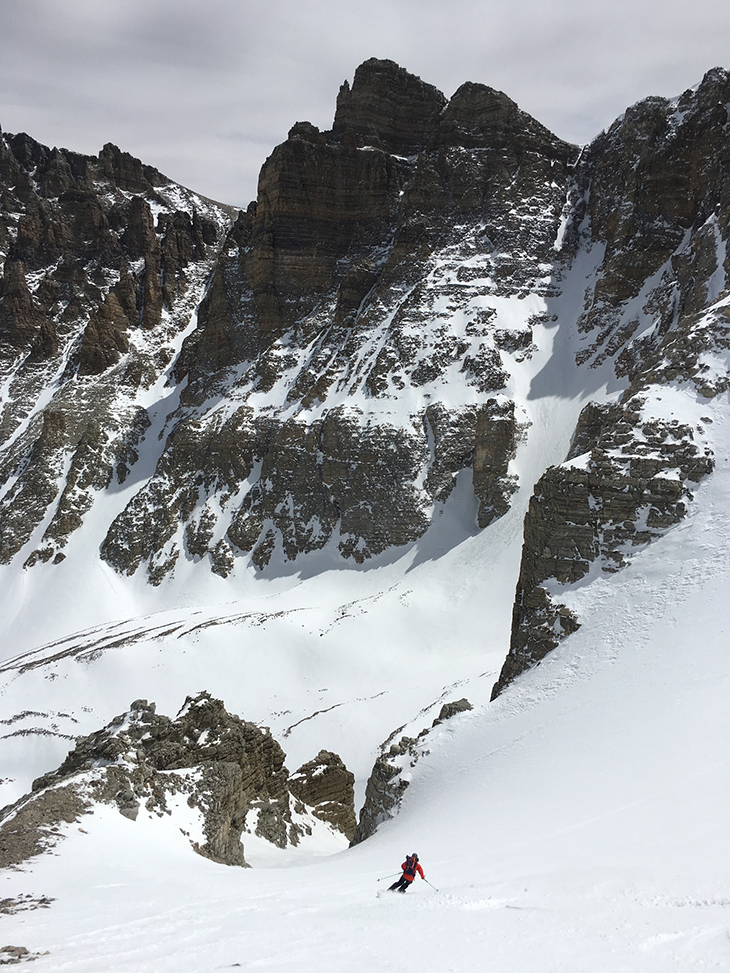 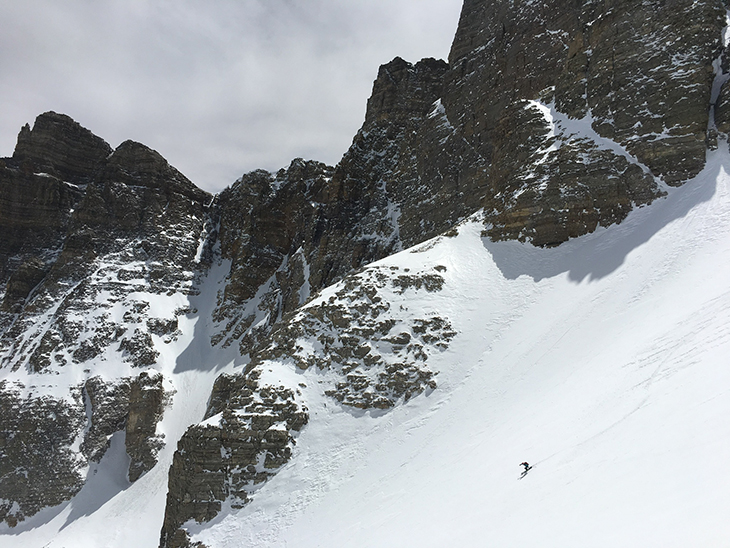 Although we skied directly off the summit into our planned descent of a northeast, dog-legged couloir that dropped into the Wheeler Glacier Basin, the top portion required some skillful shark dodging and scratchy sidestepping. The dust covered wind buff at the mouth of the now directly east facing slope slowly transformed into perfect spring corn as we descended past limestone spires and into the amphitheater. For those of you familiar with the Diamond of Long’s Peak in Rocky Mountain National Park and the North Face of Pyramid Peak in the Elk Range, this basin looked as if those spectacular sites met, consummated, and birthed a perfect transfusion of the two. 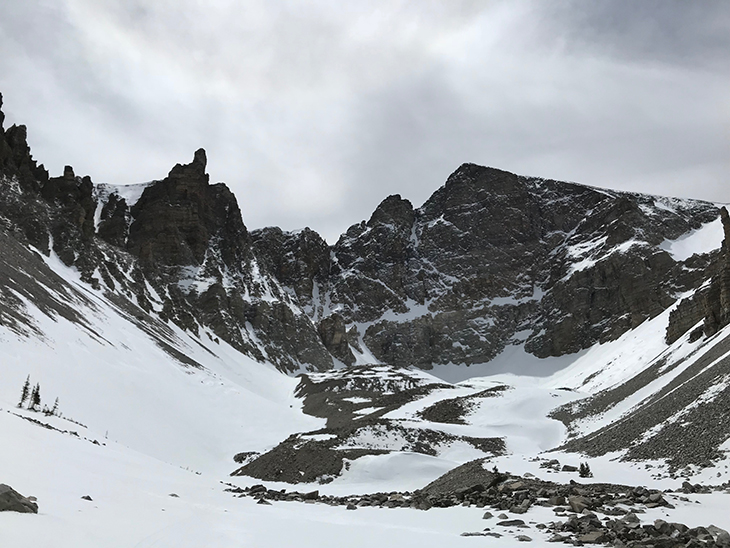 Looking back at the North Ridge between Jeff Davis and Wheeler. Photo: Nat Houston

As the corn harvest waned, we entered the moraine and kept speed to clear the flats. What came next was truly breathtaking.

As the pitch almost entirely leveled out, we entered the ancient grove of bristlecone pine trees. Skiing through a neighborhood of the world’s longest living trees was a surreal, almost dreamy experience. Progress slowed as we stopped to take photos and touch some of the more interesting looking ones. These trees thrive between 9,000-11,5000 feet in elevation and prefer limestone, quartzite, or volcanic rock outcroppings above continuous forest to lay their claim. At treeline, these pines form Krumholtz, deformed vegetation due to fierce and freezy alpine winds, and look like trippy works of art. It was quite the experience linking turns through these long-standing locals. 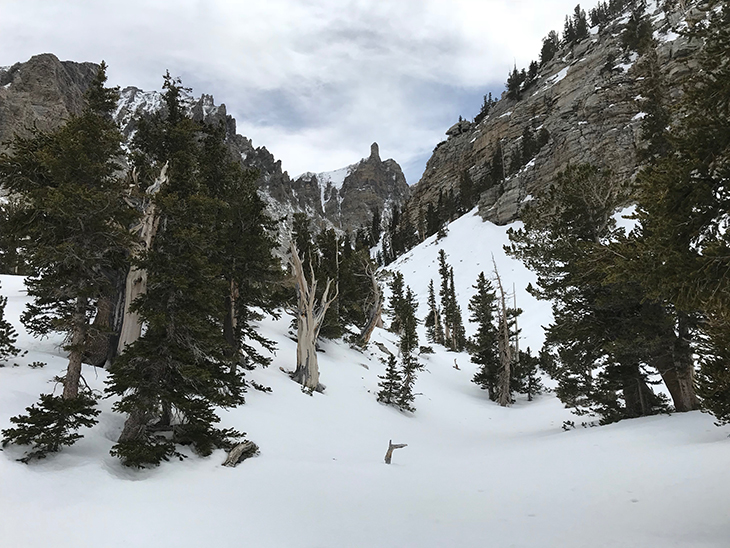 Looking back at the entrance to the bristlecone pine grove. Photo: Nat Houston

The desert heat slowly creeped up the contour lines, and while we milked every inch of snow on the descent, we finally had to succumb to the mud, shoulder our skis and finish the trudge back to the campground. Not much was said on those final, muggy miles, but the vibe was high. We were still buzzing from the enchanting surroundings that our shared love of skiing just slid us through. The temperature peaked around 70 degrees during our hike out, we were all out of water, dehydrated and surely ready to be done, but no one complained.

Looking back on that 16.5 mile, 6,400 vertical foot, eight hour adventure, I feel lucky and proud to have had the experience. Sure, it was a long day, but had I not agreed to join Adam and Chason on this mission, there’s a very large chance I would never step foot into this spectacular piece of federally protected land. Considering it took me 26 years to find out this place even existed, it’s a safe assumption that I may have never known about GBNP. To all the pioneers of the National Parks System that fought to protect and preserve our wild places, and to all those that still do so, I thank you. As President Franklin D. Roosevelt once said, “There is nothing so American as our national parks… The fundamental idea behind the parks… is that the country belongs to the people, that it is in the process of making for the enrichment of the lives of us all.” 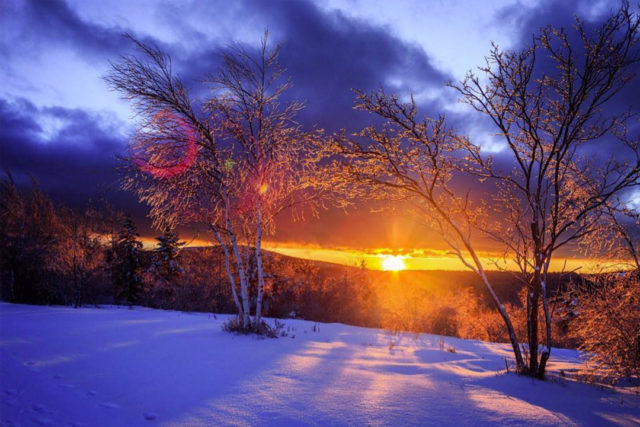