“For the love of skiing.” That’s why Hunter Hess and Alex Hall, two of our sport’s most stylish young athletes, collaborated on the short film, “MAGMA.” Shot on location at Mt. Hood, Oregon, and the surrounding area, the film exemplifies the good times and creativity that come hand-in-hand when skiing with friends who want to up the ante and redefine where to set the bar. How about that triple, though? Amen, Hunter, Amen. Recently, FREESKIER chatted with Hess over email to hear a bit more about the project and how it came together. Keep reading for the full conversation.

Had you and Alex been planning on making a film?

Was it a “spur of the moment” decision to film up at Mt. Hood this year?

We talked about making it for a few years now, but we could never stay committed to actually wanting to do it after a full season of competing. This year, I just kinda stuck with it and told myself and A-Hall we had to do it. Once we had Owen [Dahlberg] in on filming it we definitely got more serious.

What’s the most inspiring thing about skiing with A-Hall?

Why do you think you guys jive so well skiing together?

He’s definitely one of my favorite people to ski with. He is always wanting something—what I’m trying to say is, he isn’t really done or satisfied with what he has done. He is always pushing for something new, and I have similar aspirations. Also, it’s pretty hard not to have a good time building jumps all summer with one of your best buddies.

In your opinion, what is Mt. Hood like in the summertime? What makes it so special?

It’s one of the best places in the world. I always look forward to [getting to] Hood in the summer. Where else can you just be a ski bum? I live in my car all summer, swim after skiing, go skate, don’t shower for weeks—that last one is optional but there is so much to do. It’s magical, to say the least. I don’t think it will stay the way it is forever. I just want to enjoy it for as long as I can. I think that was also a big part of filming most of MAGMA there: I wanted to capture what this place meant to us, how amazing it is and hopefully make other kids want a piece of Hood.

Why did you feel it was so important to make the movie without the help of your and Alex’s sponsors?

There was no other reason to make it but for the love of skiing. There is a lot of content out there that is made to sell product. We didn’t want to make money from it. Just watch the video with your buddies, girlfriend, mom and dad, grandpa, aunt, your neighbor—it doesn’t matter! We just want people to enjoy the video. We put a lot of work into the project and it turned out awesome. It’s just skiing. Nothing else! 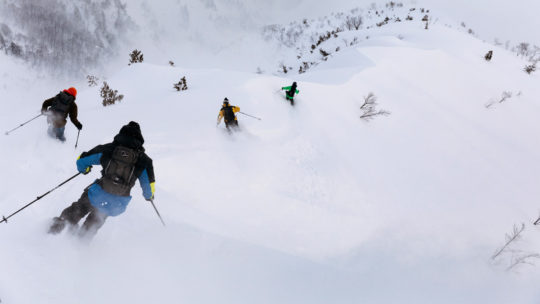