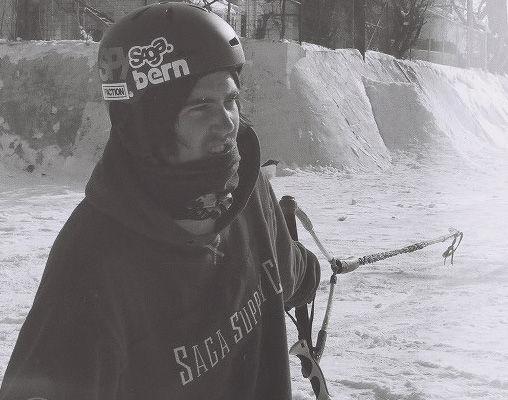 Like many up-and-coming skiers before him, Tim McChesney made his way to Salt Lake City to take advantage of the many skiing opportunities Utah provides. On his quest for powder, parks and handrails, he met up with the 4bi9 crew and became a regular in their annual ski flicks. This year, Tim stars in two of the most highly-anticipated ski films of the year, 4bi9’s All Damn Day and Level 1’s Partly Cloudy. We caught up with Tim to talk about growing up in Montana, mental preparation, and splitting his time between two film crews.

Hey Tim, where are you right now?

I am currently living in Salt Lake City, attending school at the University of Utah.

What were you up to last season?

Last season was one of the best I’ve had yet. I competed at the Dew Tour, which didn’t go too well, due to the snow coming down pretty hard during my run. After that, I was pretty over competing, so I decided to just focus on filming for the rest of the season. I did some trips with [Tom] Wallisch and [Kyle] Decker while they filmed for The Wallisch Project, and the shots I got with them are going in my Level 1 segment. I also did a trip with Level 1 that started in Denver, moved onto Kansas City, and finished up in Minnesota. The rest of my season was spent in Salt Lake City filming with 4bi9. We also took a trip out to Mount Baker, which was definitely a highlight of the year. After hitting urban for about three months, it was really sick to go out and build some jumps. It definitely got me hyped to ski a lot more pow next year.

How difficult is it to film two full parts in the same season?

Filming two segments has its ups and downs. It’s cool to get to switch up crews throughout the year and see what your other friends are trying to do with their skiing. It was definitely a lot of work though. Basically, I would go on a trip to film for my Level 1 part, and then the day I got back from that, I would be hitting something in Utah with 4bi9. It was pretty stressful, but at the same time it’s nice to be able to be so productive. We also had a ton of snow in Utah, which was sick. The whole Salt Lake Valley has a bunch of spots, and I love being able to stay at my house while we’re skiing. When you get done with a feature on the road, you have to go back to a hotel room packed full of skiers and all their sweaty, smelly ski gear. When you’re home, you can come back to your house and sleep in your own bed. It makes it a lot easier to shoot for an extended period of time.

Tim pulls back the winch while filming with 4bi9 in Ogden, UT. Photo: Mike McLeod/4bi9

How did you get linked up with Level 1?

The first time I shot with them was during production of Sunny. I was skiing Park City one day and [Level 1 Director] Josh Berman called Wallisch to see if he wanted to go out to Denver to film for a couple days. Tom couldn’t go, so I volunteered to take his spot. [Photographer] Erik Seo and I ended up hopping on a flight that night to hit some stuff in Denver. After that, I went on a couple more trips with them, and ended up sharing a segment with Wallisch.

Tell me a little bit about growing up in Montana.

Growing up in Montana was awesome. I’m from Bozeman, which is a super cool town, and the outdoors there is unbeatable. I moved there from Minnesota when I was five years old and started skiing right away. I skied at Bridger Bowl, which is one of my favorite mountains. The terrain is so sick and I had the deepest days of my life there. They didn’t have a park so we would just ski around and jump off anything we could find. Inverts weren’t allowed, and you would get your pass pulled if a ski patroller caught you. So we would go build jumps in the woods to learn flips. When I was a sophomore in high school, I started going to the other local mountain, Big Sky. They had a terrain park, so that’s where I started hitting rails and learning some more jump tricks.

How do you mentally and physically prepare for some of the burlier tricks and features you do?

I usually just do a lot of speed checks. [Laughs] Urban is pretty sketchy but I try to be as calculated as possible and feel it out. If I’m not really feeling it, then I try to not hit it. I definitely got broke off on some features this year that I probably shouldn’t have been hitting in the first place.

How was your experience at Orage Masters?

Orage Masters was a blur. Definitely lived up to the hype of the event. I wasn’t actually on a team and mostly just went to party. [Laughs] For some reason, [the 4bi9 crew] thought it would be a good idea to rent an RV and drive it out to Sun Valley. It ended up being awesome besides the fact that the RV got completely trashed. Luckily, the company we rented from didn’t seem to notice much of the damage, and we got most of the security deposit back. The most ridiculous thing I saw was probably super drunk Tom Warnick dressed up like Ronald McDonald. That was pretty hilarious. All in all, it was a wild four-day party and I don’t think anyone was sober for any of it. [Laughs]

Are you getting psyched to see Partly Cloudy?

I can’t wait to see the movie. I am going to the world premiere in Denver on September 7th. I only filmed with a couple of the guys this year, so I haven’t really seen a whole lot of the footage. I did get a chance to see some of the shots this summer though, and it’s looking good. Chris Logan has some banger shots this year, so I’m definitely looking forward to seeing his finished segment.

Do you have any plans for this coming season?

I’m mostly just going to be filming and maybe doing a couple contests here and there. I will be working with Level 1 and 4bi9 again and I want to get out of the streets a little more to ski some powder. I am also going to try to spend a month in Stockholm, Sweden hitting urban with Niklas Eriksson. I went there last year and it’s such a sick city. No one cares what you hit, so you don’t really have to worry about getting busted. 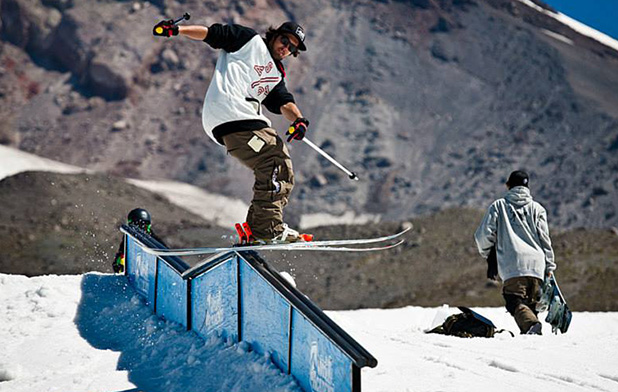 How difficult is it to manage skiing and school?

It’s pretty mellow for me. I only go to school in the fall, so I don’t miss much skiing. Toward the end of the semester, it definitely gets a little tougher. We start filming urban all night and I have to get up to take finals the next morning. But it usually works out okay.

I’d say you’re more focused on filming than competing, but is there any sort of friendly rivalry among you and the rest of the film-focused athletes?

Not for me, really. I love watching other people’s segments and seeing what they did throughout the season. Watching other people ski gives me a new perspective on my own skiing. I think that’s why urban skiing progresses and changes so much. Everyone builds off of each other and has different styles and ideas for features. I also watch a ton of snowboard segments, and am really looking forward to seeing the new Transworld movie Nation.

Is it true that 4bi9 wasn’t planning on making a movie this year?

As the season got going, we weren’t really sure what we were going to do. Dale [Talkington] and [Andrew] Napier were focusing on putting together Dale’s Co-lab edit and the rest of us were just hitting street spots whenever there was enough snow. AJ [Dakoulas] was busy doing some film work outside of the ski industry, so Mike McLeod came aboard this year to help shoot. A month or two into the season, we realized that all of us had stacked a ton of shots already. AJ ended up quitting his job to work full time with 4bi9. Salt Lake City had this crazy inversion that kept the sun hidden, so the snow on the ground lasted for a really long time. At one point, we spent a month straight hitting or scouting features every single day. We had some of the most productive days of filming that I’ve ever been a part of. Sometimes we would pick off three features in a day. We also added some new riders, like Lucas Wachs and Ben Moxham, who really helped make the film a lot more diverse. I think it’s going to be the best 4bi9 movie to date.

Stoked to hear it and can’t wait to see the flick. Any last thoughts?

Just want to give a big thanks to my sponsors: Saga Outerwear, Faction Skis, EVO, Bern, Spy Optic, Full Tilt Boots, and Pow Gloves. Make sure to check out Partly Cloudy and All Damn Day this fall.

1 thought on “Catching up with Tim McChesney, star of “All Damn Day” and “Partly Cloudy””