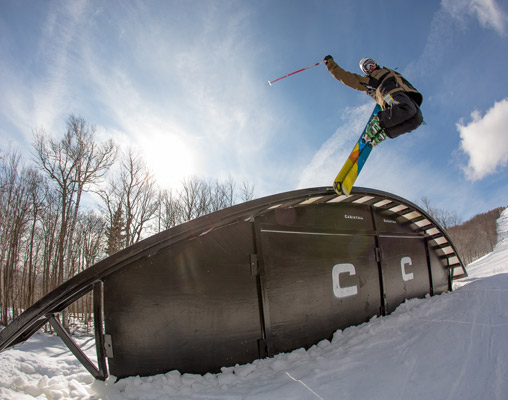 [Editor’s Note: Back in December, Freeskier ran a contest where you could win all of Nick Goepper’s gear and a ski date with him at Mount Snow’s Carinthia Parks. We sent along writer/photographer Dan Brown to document the experience.]

“Check, check it out! There’s like a six-inch sub in the back!”

Ian Burson of Carson City, Nevada points out his recent acquisition of an iPod dock/speaker combo from Kicker, which sits upon the hotel room’s kitchen countertop, just above the dishwasher that has its door ajar with two sets of ski socks drying on the top rack.

I’d come out to Mount Snow the night prior for a two part assignment: profile Nick Goepper, who’d just won the X Games gold in slopestyle, and cover Burson’s trip out here.

Burson’s just wrapped day one of a two-day on-hill session with Nick. Burson had been the lucky winner of a contest put on by Goepper and Mount Snow, netting two nights lodging, lift tickets for a group of four, and being hooked up like Christmas on repeat, with each one of Goepper’s sponsors kicking in on a full setup including Volkl skis, Marker bindings, Dalbello boots, Smith goggles and the aforementioned Kicker iPod docking system. Rounded out with a feature in Mount Snow’s web series C Sessions, it’s no wonder the kid is visibly excited.

“They had that whole table stacked up,” Ian’s father Chad interjects while pointing across the room to a table that splits the room where a loose pile of the other prizes sit. “He came in, he walked in the door, he was like, ‘No way!'”

“I didn’t know if it was real or not,” says Burson. “I think I ran up and down around my house three or four times, screaming.”

“So what was it like hot lapping with Nick?” I inquire.

“It was amazing, it was so legit. Having someone there to film… just the whole vibe. He’s so nice and it’s sick that he put this on for us. It’s pretty much everything I could have thought, and more.”

Burson, who rides for the Northstar Freeride team, took his time getting to know Carinthia’s park during the morning alongside Goepper, but during the second day, Burson was firing down the jump line and rail sections, making short work of the plethora of features and bagging shots with Mount Snow’s on-staff filmer Dylan Demers.

Demers had initially expressed some doubts as to whether or not an edit could be made from the weekend. “It sounded like an awesome idea but then it was just the issue of you never know who’s going to win the contest,” he says. “I could only imagine if a kid won who just didn’t know how to ski or something like that.” Fears placated, Burson was able to deliver for the webisode, which is embedded below. “Ian actually could really rip,” said Demers.

“[Normally] when you go places and you imagine them in your head it’s like, totally fantasy, and when you get there, it’s totally off,” says Burson. “But when I got to the East Coast, it was pretty much right on with what I thought it was going to be. Everything was super close knit. It was amazing. I loved every second of it. I want to go back, actually.”

Favorite Ski Film: Sunny, all the Voleurz films have always been my favorites because the way they’re filmed and the attitude throughout the film is always good. Everyday is a Saturday, that one too. How do you just narrow it down to one?

Who do you normally ride with? My friend Gary and then my coaches and the Northstar team.

What’s your biggest fear? My greatest fear would probably be slicing my arm off on an edge… or falling of a chairlift.

What do you do when you’re not skiing? Usually talk shit to other kids over the internet on Newschoolers or go and do trampoline training.