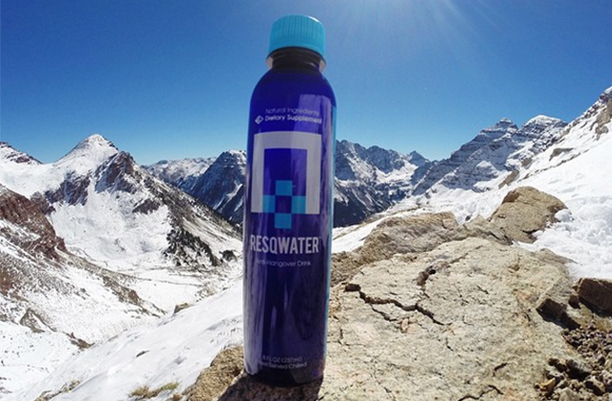 The following is a timeline that sheds light on team FREESKIER’s first experience with the up-and-coming anti-hangover drink, RESQWATER.

Disclaimer: No animals were harmed in the making of this article.

1:00 p.m. The FREESKIER crew leaves Colorado’s Front Range to venture west for Aspen Snowmass’ tenth rendition of The Meeting: a kick-ass weekend filled with movies, fashion shows, concerts, industry conferences and networking. The leaf peeping will be popping and our crew is in great spirits. It will be a near perfect setting for all-around great times.

6:30 p.m. FREESKIER staffers Henrik Lampert, Damian Quigley, Zach Berman, Donny O’Neill, Grant Savidge, Nicole Birkhold, Lindsey Hagen and myself join Team RESQWATER: Troy Michels, Chris Jerard, Pat Crawford and my good friend Michael Olenick for some Italian grub at L’Hostaria in downtown Aspen. The town is bustling, the restaurant is packed and the aroma is unmatched after a long day of conferences. After quick introductions we sit, ready to converse about the science of RESQWATER, and to stuff ourselves with scrumptious food and copious amounts of wine.

6:42 p.m. RESQWATER founder Troy Michels chimes in with an announcement; he begins to tell the story of his very first experience with the up-and-coming anti-hangover drink. The tale consists of an ungodly intake of alcoholic beverages combined with a few bottles of RESQWATER throughout the night. It’s left unsaid just how many drinks Troy downs in his escapade. However, I can assure you that he has his share and then some. In the end, Michaels experiences something that at the time seems near impossible: no hangover. Troy goes on to explain that RESQWATER staves off hangovers by flushing acetaldehyde, the hangover-causing byproduct of alcohol metabolism, out of your system. Furthermore, the drink contains electrolytes, b vitamins, sucrose and water to help you recover faster.

Note: Troy Michels is an action sports OG. His decorated industry career includes a tenure with Aspen Snowmass as well as Target. Michels has worked alongside and managed high level athletes such as Simon Dumont and Shaun White. A few years ago, he decided to take the reigns at RESQWATER due to his deep belief in the product and its potential. So naturally, when he offered a pitch, we’d be damned fools if we didn’t listen.

Our crew peers around the table at one another and Michaels speaks up, explaining that he knows precisely what we are all thinking, and that he too was skeptical about the effects of this beverage until he conducted further tests (on himself).

RESQWATER is “What to drink, when you drink.”

6:55 p.m. It’s suggested by one of the many attendees that our squad take its turn with RESQWATER—bring the drink for a “test drive” of sorts.

Editor’s Note: FREESKIER loves to party. Not just with a bottle in hand. I personally like to treat party as an attitude. Fun times, all-day, everyday. However, we were not about to tread lightly around the alcoholic beverages that night. The Meeting film fest is no time to relax. We were looking to tie one on. You know, “When in Aspen,” right?

6:57 p.m. It’s decided that half of our team will party with the aid of RESQWATER, while the other half will drink sans the anti-hangover potion.

“I’m planning on going on a hike with Donny in the morning,” Lampert claims.

“Well, you’d better choose the right straw so you can drink RESQWATER all night,” Olenick jokes.

“But seriously,” Michels chimes in, in a serious tone, “You should let loose. Drink as you normally would, but have a RESQWATER between every few drinks.” The drawing of straws begins.

7:04 p.m. “What can I get you to drink, sir?” The waitress kindly asks as I wrestle with the lengthy menu.

“We’ll just have a few bottles of the [such and such] red,” Birkhold interrupts.

The night is young, and already out of my hands. I peer at O’Neill, who’s seated beside me. We’re gonna roll with the punches. Quigley, Lambo and Berman put down their first bottle of RESQWATER.

8:45 p.m. After seven healthy glasses of wine, each, our crew is on track for a successful evening. The Bolognese, muy bien. I notice that the overall volume of the table is rising. Another bottle of RESQWATER is downed by the lucky few. I look away jealously, then pour another glass of vino.

9:02 p.m. It’s time to disperse from L’Hostaria. Michels and co. wish us the luck that we’ll surely need.

9:18 p.m. I join Lampert for a Moscow Mule at a small bar in town. Shortly thereafter, we pile into the gondola and ascend to the Sundeck atop Ajax for a screening of Level 1’s less and Stept’s Ten and Two.

11:00 p.m. The party is bumpin’ at the Sundeck. Budweiser and well vodka are the go-to. Drinks number 10, 11, 12 and 13 go down smooth. The word begins to spread about an after party at The Little Nell following the film premieres.

A familiar “YOLO!” echoes in the distance behind us. Lambo’s on his way.

Editor’s Note: The happenings between 1:00 a.m. and 6:30 a.m. remain a mystery. I can assure you that great times were had and the night was finished off with some NY Pizza. The receipt found in my pocket the next day serves as proof.

7:22 a.m. The standard iPhone alarm rings somewhere in the depths of my brain. Am I dreaming?

“Hank, are you coming on this hike or what?”

I open my eyes slowly. O’Neill is staring towards the bunk that I’m sharing with Lampert, awaiting a response. I gaze up. The ringing of my dreams become reality. Lampert’s alarm is going off. Later, we come to find it’d been sounding for 22 minutes. “Is he even up there?” I wonder.

“Hank, turn your alarm off.”

There’s movement. A foreign female then drops down from the top bunk.

She says nothing. She grabs her clothing.

Lampert peers over the edge. He looks at me with a pair of sleepy eyes and a shit eating grin. “Alright. Let’s party.”

The thought of a hike at this point is, to be blunt, fucking awful. Completely inebriated, still, I go back to bed hoping to sleep the pain away. 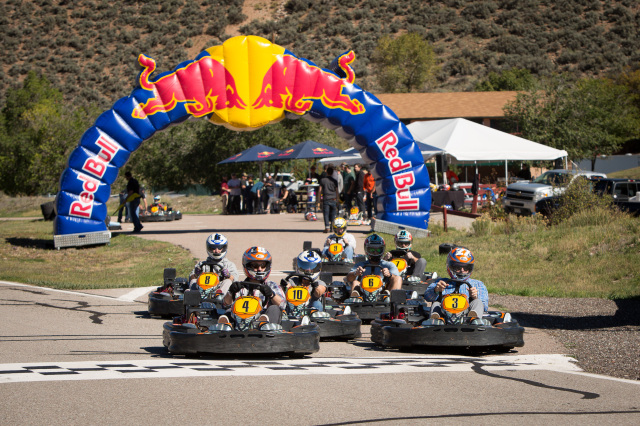 12:00 p.m. The gang (aside from Lampert and O’Neill) reconvenes at a nearby race track. It’s time to go-kart. But first, we check in with Birkhold to provide our hangover status. I stumble over, shades on, stomach grumbling.

Berman and Quigley are particularly chipper. Quigley informs me that he feels like “a million bucks.” The two of them slap five as I flip ’em the bird. Quigley doesn’t have a headache at all. Zach claims to be “sharp as a tack.”

Like myself, Grant isn’t doing so hot. According to Birkhold’s notes, he is being a “total dick” and has an “upset stomach.”

For the next few hours, Birkhold keeps tabs as the four of us engage in some friendly competition at the track.

The group discusses the merits of the anti-hangover drink. Though we were skeptical of the potion at first, we are in agreement that the product does indeed have a positive effect. We cite Team RESQWATER’s man-handling of Team Short Straw at the race track as one indicator of its worthiness. We also consider Lampert, who managed to summit Buckskin Pass (12,500 ft) in knee-deep snow the next day, on one hour of sleep.

A few things to note: By drinking RESQWATER, we’re not guaranteeing that you’ll kiss hangovers goodbye forever. This beverage is intended to be an aid, not a cure. The fact remains, the science is proven. After this trial, we were genuinely impressed, so much so that some of our staff continues to drink the stuff on the weekends—a few during the evening, and one before bed seems to do the trick.

It’s also worth noting RESQWATER’s lemon-lime flavoring is a turn-off to some folks on their first go-round. From our experience, the taste grows on you, through the remainder of that first-ever bottle, to the second drink, and to the next. In fact, it’s not unusual to see staffers here sipping on a bottle in the middle of the day, on a weekday, #justbecause.

At the end of the day, there’s only one way to find out whether or not this stuff can work for you: and that’s to try ‘er out. If you’re anything like us, you’ll become a brand ambassador in no time. We have folks ask us about RESQWATER quite often, and we’re now quick to respond with the brand slogan, it’s “What to drink, when you drink.”

So, cheers to Michels and co. for providing us the opportunity to take this “test.” The season is young and we’ve got some serious partying to do. We’re looking forward to having you along for the ride.

To cover my own butt, I’ll remind you to drink responsibly… And happily.

Related: Reliving the Meeting 10: A weekend for the books in Aspen, CO

1 thought on “Hangover: 0 FREESKIER: 1 — We take RESQWATER for a test drive”