Constructing one of the world’s largest snow jumps is a bold endeavor, no matter how you look at it. To build one at a small ski hill operated by locals and not equipped with a proper snowcat, though, that’s a whole different ballgame. This was Field Productions’ challenge as it sought to build a booter with a backdrop of pristine, blue fjord waters. In northern Norway, just above the Arctic Circle, lies a town by the name of Glomfjord. Home to approximately 1,100 people, the place is surrounded by mountains that rise nearly 3,000 feet, straight from sea level. It’s also home to a tiny ski resort, complete with two chairlifts. And it was here that, three years in the making, Field Productions constructed the perfect jump.

#tbt Waiting for the sun to pop. Amazing surroundings up north! #supervention2

There are many beautiful fjords in Norway, sure, but not so many lift-serviced ski areas that offer views of those fjords. Field searched high and low for the most epic place in Norway to host a park shoot and chose to build a jump here against all odds.

You see, the ski hill is maintained and operated by a group of locals who work free of charge. In Norway, there’s this thing called “dugnad,” which essentially means that everybody does their share of work without compensation so that everyone can collectively enjoy the fruits of the labor. The ski hill in Glomfjord would not operate were it not for dugnad. So, not surprisingly, the locals were hesitant to participate when asked to contribute to such a big project.

Field first attempted to build a jump here in 2013, but without the use of a proper snowcat, things moved slowly. The resort did have a snowcat, but it would not stand up to the task of shaping a massive jump of the sort Field intended to construct. Ultimately, Field arranged for a snowcat to be transported some 800 miles by truck. Unfortunately, just before it was set to make the trek, that snowcat was sold by its owner and the project was canceled.

Fast forward three years and Field returned, this time having procured a Pisten Bully from the Lofoten Islands to the north. The snowcat made a 10-hour journey by land and sea before arriving. Along with the help of locals wielding shovels, the snowcat spent 15 days farming snow and shaping a jump prior to the arrival of skiers Øystein Bråten, PK Hunder, Tiril Sjåstad Christiansen and Jesper Tjäder. When Christiansen arrived at the jump site, she said it was the sickest view she’d ever seen.

Over the course of nine days, the crew encountered roadblocks from cloud cover to wind to snowstorms. The jump site lay 1,500-plus feet above the upper-most chairlift station, so, just getting people up to the jump each day was a big hassle—especially when two of the three snowmobiles broke after crashing into one another. In the end, though, it was epic. The skiers enjoyed two full sessions. Tjäder threw a triple. Christiansen landed a switch 1080 and Bråten killed it on every jump. After all of the waiting, all of the effort and with 10 camera men on-site and after having poured more than $100,000 dollars into the shoot, a vision came to life. And what could be better than that? 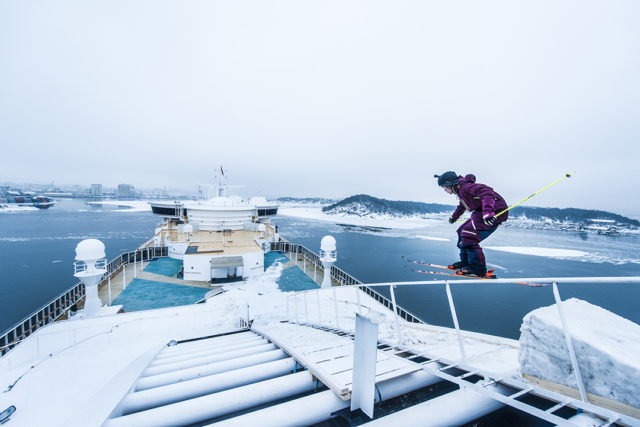 Seas the day: How Anders Backe skied the rail of his dreams on a cruise ship