The feat was performed by skier Anders Backe while filming for Field Productions’ latest film, Supervention 2. Watch the full movie, here, and go behind the shot, below. “This was a project I had been working on for almost a year and a half. I’d seen a few Color Line cruise ships during a morning drive into Oslo—there looked to be some railings on top of those monsters, so I called Color Line’s marketing division. There were a few more phone calls and I sent them a hell of a presentation with sketches that I had drawn up. We later had two meetings at their office. And ultimately, I was invited onto the ship to get a closer look at the rail and to further explain the idea to the ship’s captain and Color Line’s director of communications. 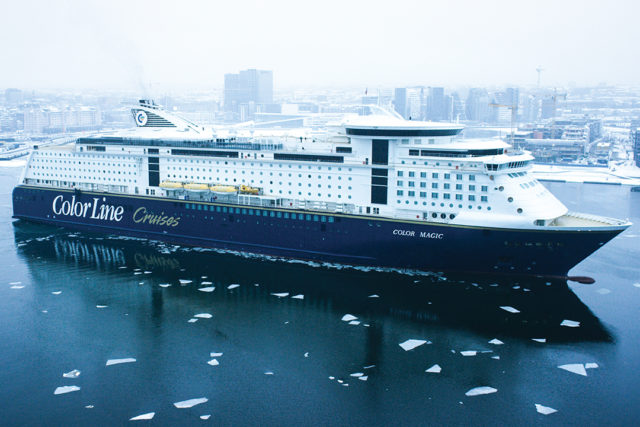 The Color Magic in all her glory. Photo: Vegard Breie

Color Line was stoked to be a part of this project, but they made it clear, the only possible date and time to execute a photoshoot was Monday, January 25, 2016 from 11 a.m. to 2 p.m. The ship was due for servicing in this window, but otherwise it’s operating full time, 365 days a year. So, finally, plans were set in place, approximately four months ahead of the shoot date. I had a running dialog with Color Line about logistics like snow, people, timelines, approvals, passports, etc. throughout that time period.

At 10 a.m. while travelers were disembarking from the ship, we started carrying snow up various sets of ladders to fill a short in-run and build a jump by the railing we intended to slide down. Days earlier, we employed Nordic Cranes to collect 30 cubic meters of snow in bags; a huge telescoping crane airlifted the bags onto the ship. That saved us some headache. Backe and the Field Productions crew begin to load snow onto the ship. Photo: Vegard Breie

At around 12:30 p.m. we left the dock. The captain had instructions to position the ship in such a way that would allow us to capture video clips with downtown Oslo serving as a backdrop.

The rail wasn’t a difficult one in itself, being about 30 feet in length and four feet off the ground, but it was the whole setting that instilled some nerves in me. Imagine, you’re standing almost 200 feet above the sea, on a ramp that you built yourself with shoddy planks, on a cruise ship that’s floating around in one of the world’s most beautiful harbors. We only had about one hour of time to try it out a few times before a helicopter was set to arrive, in which the Field crew would capture aerial footage. Putting so many people to work to get this shot definitely set a decent amount of pressure on me. Once everything was set up, Backe went for a cruise. Photo: Vegard Breie

It all turned out to be a bigger project than I had expected, but the bigger the better, right? I was stoked to nail a trick on this feature and jib a floating cruise ship in front of the city.” 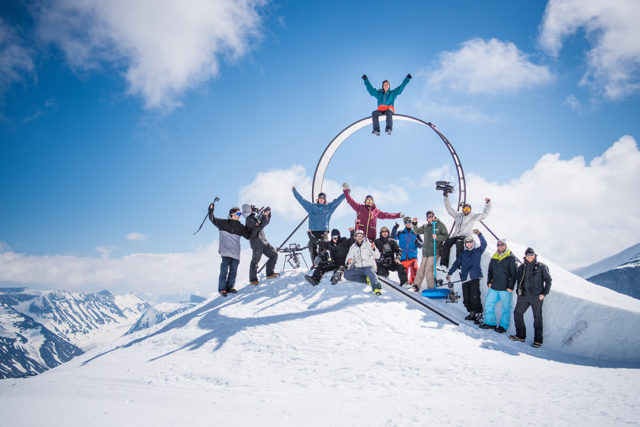 The scoop on the loop: How Jesper Tjäder skied the world’s first loop rail

Got the opportunity to ski in the biggest waterpark in Scandinavia, @bosommarland a few years back! #BackeBreieTour ????️ @vegardbreie #magasuget #waterpark

Her's another one from the epic sunrise in @skistartrysil a few days back! ???? @olamatsson

Good times being back out there with ???? @vegardbreie, gapping rails in the december slush! #backebreietour

One thought on “Seas the day: How Anders Backe skied the rail of his dreams on a cruise ship”