Rowdy pillow line footage doesn’t happen automatically. There’s a method to dropping pillows safety and it involves dialing into the snow and avalanche conditions. Just ask Riley Leboe and the Seeking Nirvana crew, who star in part two of BCA’s new Send and Return video series, “Chasing BC Pillows with the Canadian Hosers.”

Send and Return is the “three-part safe shredding series” created by Backcountry Access (BCA), renowned U.S. manufacturer of avalanche rescue equipment, including Tracker beacons, Float airbags and BC Link radios. In their own words, the series is “all about riding hard in the backcountry—according to the avalanche conditions.” Episode One, “Wrangling cold smoke with the Bozeman crew,” is all about crushing powder in southwestern Montana, while Episode Three, “Riding Revy with Team Thunderstruck,” features serious motorheads going hard in Revelstoke, BC. Showcased here, Episode Two is somewhere in the middle, with the Seeking Nirvana crew using their sleds to access some pillowy ski terrain way up north. As you’ll see from their general demeanor (and accents), Leboe & Co. are true canuckleheads. 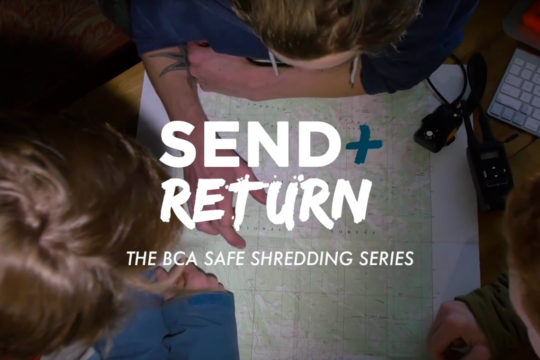