Big Air, Slopestyle and Halfpipe events aren’t just about the athletes. Here’s a closer look at how this year’s Olympic-grade freeski venues were created from the ground up.

A Tricked-Out Tribute to the Great Wall of China

Athletes hailed the slopestyle course in Pyeongchang as one of the most unique ever made. Schneestern, the German snowpark wizards behind the design, are looking to outdo themselves with a wildly creative course at the 2022 Olympic venue, Genting Resort Secret Garden. No surprise, the company’s CEO, Dirk Scheumann, is a former freeski pro and still thinks like one. The course is as theatrical as it is technical, thanks to dry, extra-cold conditions that make it possible to construct artsy sculptures, like samurai temples, that would melt in places like Switzerland or Austria. A snowy replica of the Great Wall of China has been built down the side of part of the course and cleverly doubles as wind protection. Similar to Pyeongchang, the run boasts six features, with three multifaceted rail-jib-jump-butter offerings at the top of the course and three varied jumps below. A rail placed atop the roof of a Shinto shrine is sure to yield some tricks we’ve never seen. The first jump section has two shark fins that give skiers two opposing angle takeoffs. A quarter-pipe side transition, a common feature in the last few X Games courses that requires skiers to take off on the halfpipe wall rather than re-enter and go straight out, will be a popular option in the next section. And the final jump is the money booter: a classic, big air jump. Built on a pitch, it’s meant for speed and airtime. A combination of big, technical creative features will allow athletes to really show off their individual style and attack the course from multiple angles. Techy skiers are going to lose their minds dreaming up runs.

Back in the day, halfpipes might have been smaller, but they were hand-shaped and flaw-filled. “Coming through, you had to remember which wall to pop on your trick,” says coach Riddle, a halfpipe Olympic medalist. “In your head you’d be thinking, ‘first hit over vert, second hit under vert, third hit perfect.’ Thanks to machines, pipes are [now] all pretty close to perfect.” Since the halfpipe made its Olympic debut in 1998, its walls have nearly doubled in size to deliver a competition with bolder, high-flying tricks. It’s also about 200 feet longer and 33 percent wider, creating the perfect stage for speedy transitions and massive airs. Those towering 22-foot icy walls are surely intimidating but, according to coach Riddle, there’s no safer arena to huck big tricks. “There’s way more room for error and the transitions can be longer and bigger compared to what was possible on 15- or 18-foot pipes,” he says. “Superpipes have pushed the sport to new levels.” Case-and-point: American Hunter Hess landed the world’s first ski halfpipe triple cork earlier this year and is likely to add it to his bag of tricks for the Games.

The setting of the Big Air comp looks straight out of Bladerunner. Built on a steel mill site in a former industrial park in western Beijing’s Shijingshan district, Big Air Shougang shares the skyline with smokestacks and 230-foot-tall cooling towers. Part of a massive urban renewal project, the world’s first permanent venue for Big Air raises the bar for urban comp ramps, which are typically temporary scaffolding constructions. Made of steel and concrete, it soars 200-feet high, spans nearly 540-feet and the curves of the track were inspired by the ribbons of the flying apsaras depicted in the country’s UNESCO-listed Caves of the Thousand Buddhas. State-of-the-art features include an in-house snowmaking system and speedy elevators, as well as stadium seating. Designed so a snowcat can groom the entire surface, the jump can accommodate a kicker with a table of nearly 90 feet. Athletes got a taste of the ramp at the 2019 Air + Style Beijing FIS Big Air World Cup and its wide, well-groomed in-run and long, steep landing earned serious praise. New Zealand freeskier Finn Bilous went as far to call it the best city big air jump he’s ever hit. It will, without a doubt, be one of the most Instagrammed backdrops of the Games. 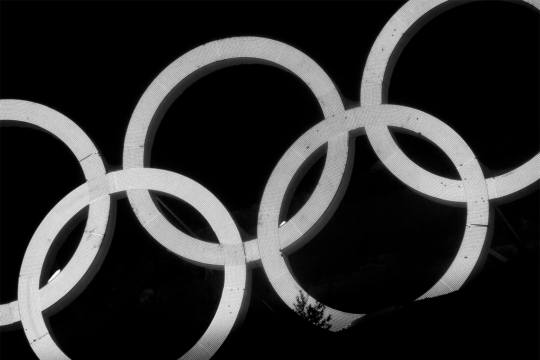