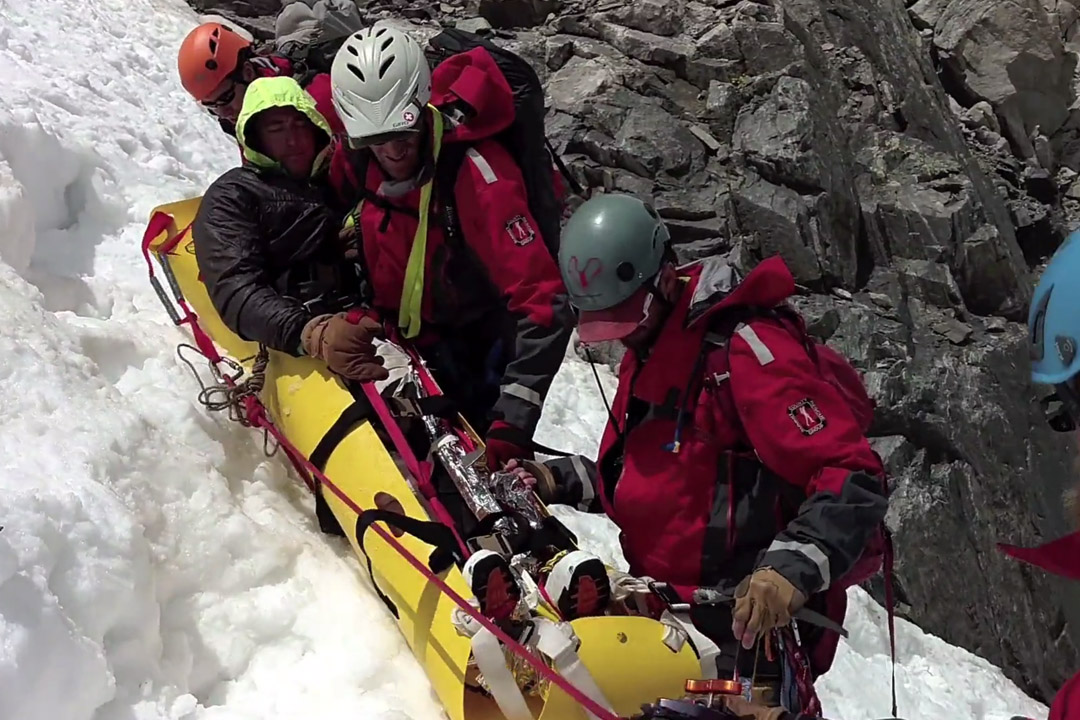 Josh Barilar is not the kind of guy who ends his ski seasons in conjunction with ski resorts. Instead, he’s an avid backcountry ripper who gets as many days in as humanly possible throughout both spring and summer via the highest peaks in Colorado.

This past season came to a screeching halt for Barilar, however, after a burly crash in Fletcher Mountain’s Northeast Couloir, located just south of Copper Mountain and Breckenridge Resort in Summit County, Colorado.

Just moments after dropping into the Couloir, Barilar was taken out by a pile of slough, then pushed up against a rock wall and swallowed into a six-foot-deep slot. 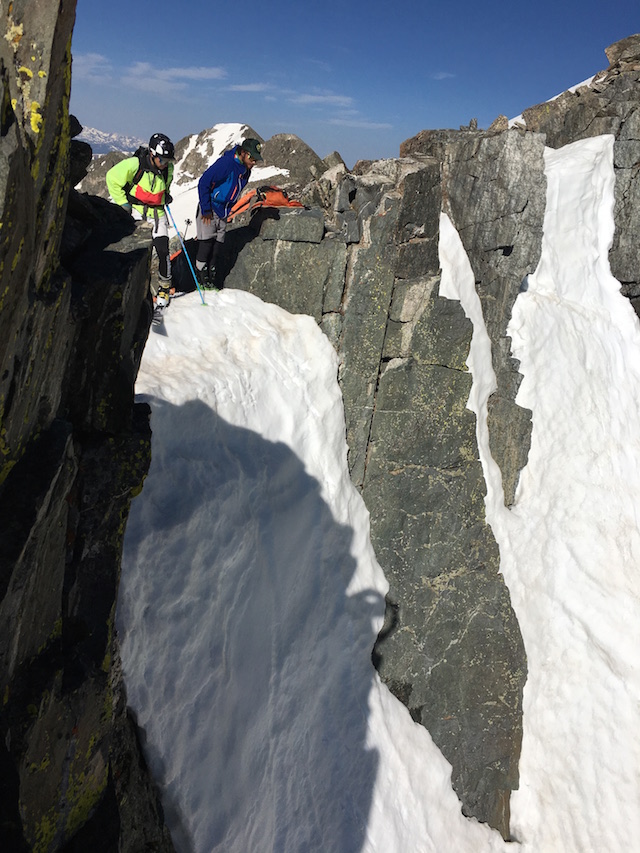 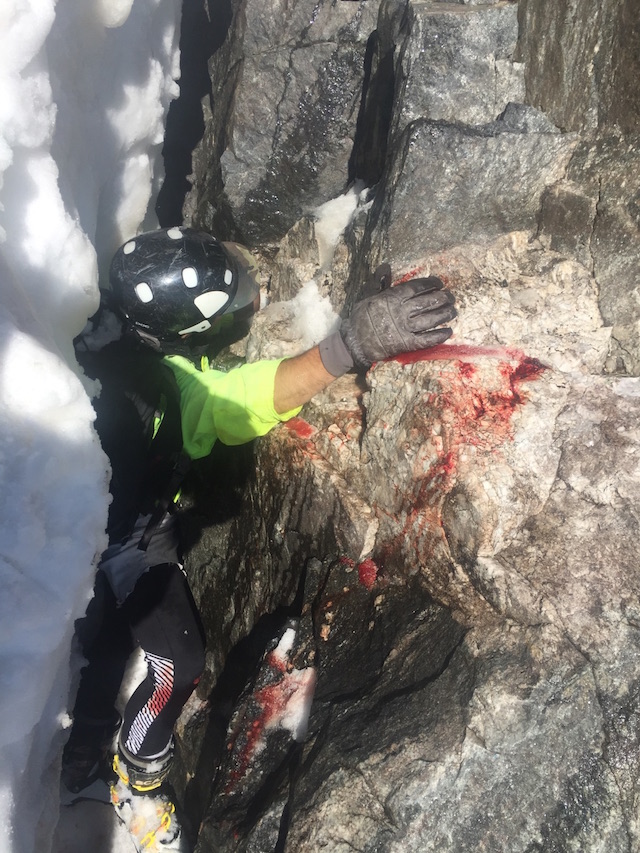 Barilar wedged inside of the six-foot-deep slot after his crash.

These details are just the tip of the iceburg. See a video and full recollection of Josh’s accident, below. 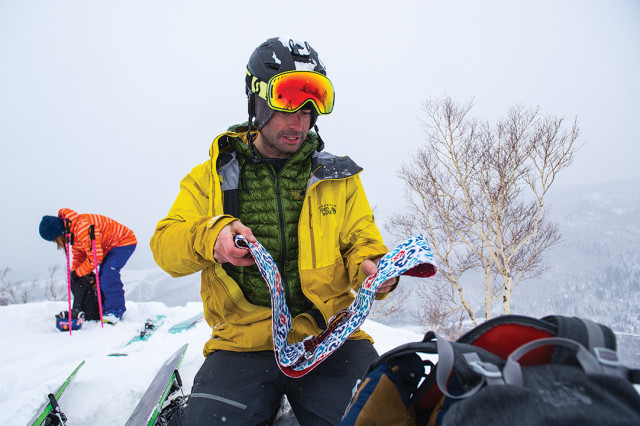 Video from the accident

“Aaron Rice, Nick Lyons and myself set out to ski the Northeast Couloir off of Fletcher Mountain from the Blue Lakes Trailhead at about 6 a.m. We then summited the line at about 8:30. The intent was to ski the line followed by another line off the same side.

The entrance was steep, about 60-70 degrees, and we knew the snow was going to slough down the couloir. I stood at the top of the line, thinking of the best way to ski it. Aaron and I had skied this exact line two days prior so we knew what we were getting into.

I dropped in at about 8:50 and the snow immediately sloughed, but I was completely aware of it. I then started making turns alongside the slough and everything was okay. The slow-moving snow was to my left and at the sixth turn something went wrong. All of the sudden, I found myself going straight into the couloir’s rock wall. I had no choice but to hit it with my hands out to brace the impact. We later determined the slough simply swept me off my feet, leaving me helpless to self-arrest.

I ended up falling into a slot between the snowpack and the rock wall about six feet in depth. I had no choice but to hold onto the rock wall as best I could simply because I did not want to risk falling further into the slot with spring snowpack conditions. My skis were still on, with the majority of my weight on my right side.

Aaron then skied down to the scene to help me release my skis. I was still wedged between the rock and the snow, holding onto the wall with almost all of my weight on my injured right leg. Aaron managed to shovel the snowpack vertically to allow my body to push itself out of the slot.

Once I was out of the slot, we both realized the injury to my right leg. We immediately used two socks to create a tourniquet and tried our best to elevate the leg. At first, our plan was to get down the rest of the 40-degree slope. However, once we tried to move the leg, the bleeding continued through the tourniquet.

At this point, we all decided a rescue was necessary. But, unfortunately, we had no service, so Aaron decided to hike up to the top of Fletcher Mountain and call for help. Nick stayed with me to help keep me warm and elevate my leg, and we waited for about an hour and a half in the snow together for the first rescuer to arrive.

Hunter Mortensen was the first rescuer to arrive on the scene, assess the situation and explain the plan. Aaron helped dig a deadman snow anchor to set the ropes on. They explained they were going to use two deadman snow anchors to slide me down to the helicopter. The team roped up my body and used a solar radiation blanket to slide me down to the first anchor. I was given an ice axe to keep myself from sliding too fast. Nick then started on the second deadman anchor while I was sliding down the first one.

Once I got to the second deadman anchor, Chris and Ben, two other guys from the rescue team, had arrived with a portable plastic sled. The team of four placed my body onto the sled and immobilized my legs with rope that I had to hold onto as we descended down. We descended as far as they thought seemed necessary and from there the team released the rope and carried me to the helicopter. It had been running and waiting for quite some time at this point.

I was then successfully loaded into the helicopter and flown to St. Anthony’s Hospital in nearby Frisco. We endured a hail storm on the way, but were greeted by blue skies once we landed. During the rescue, there were thunderstorm clouds all around us and the weather ended up turning into a downpour. The rescue team and my skiing partners had to hike about four hours out of McCullough Gulch in a partial downpour after the rescue.”

Josh’s accident is yet another reminder that skiing in the backcountry is extremely dangerous. Everything can go totally haywire, even for the most experienced skiers, and being prepared for the worst is the least you can do.

Join us in wishing Josh a speedy recovery, and enjoy his summer shredding video, below, to end things on a lighter note.

In conclusion, Josh would like to thank his family, the Gannon brothers, Aaron Rice, Nick Lyons, the local Search and Rescue team and Flight for life.