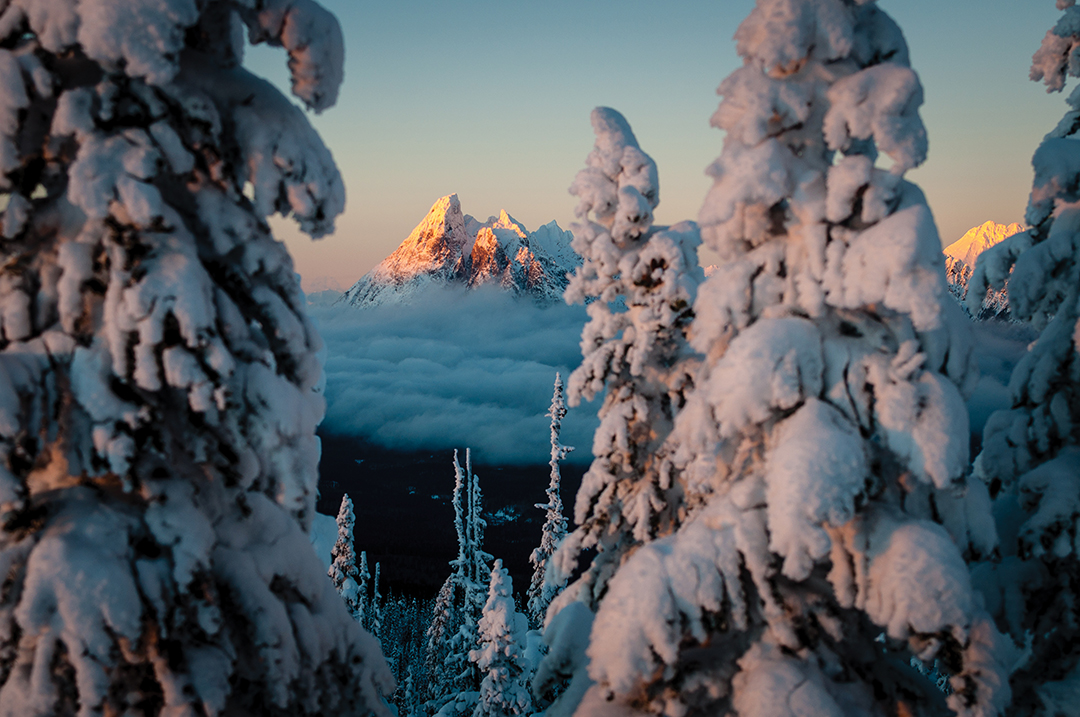 As you deplane the turboprop aircraft on the runway at Northwest Regional Airport in Terrace, BC (which is most likely how you’ll arrive, unless you’re driving 15 hours from Vancouver), you can actually feel Northern British Columbia. Especially if you’re traveling from the area’s climate antithesis: Colorado. My first breath of fresh air feels cool, damp and oxygen rich. On this March day, the fog lingers in the valleys, drapes the old growth cedars, and hovers above the steelhead famous Skeena River which meanders around gravel bars on its way to the nearby Pacific. The moisture, the dark timber, the rugged Coast Range, it all just feels … alive. 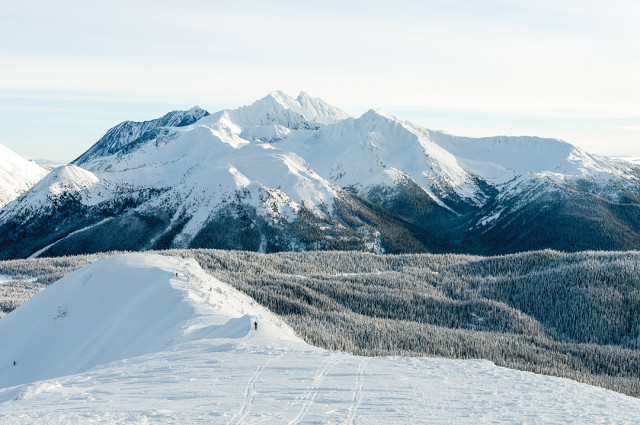 The terrain is the real deal in Northern BC. Photo by Rikki Dunn

Terrace and Smithers—the towns we’re staying in to access the region’s best skiing—sit about as far north as you can ride a chairlift in the province, but Northern BC, an area larger than California, twice the size of the UK and populated by less than 250,000 people, stretches north for another 500 miles of mostly uninhabited wilderness to the Yukon border. There’s a lot of elbow room up here, which is just how Terrace’s population of First Nations (aboriginal Canadians), loggers, mill workers, miners, fishermen, surveyors and skiers, like our ACMG ski guide Hatha Callis, like it. Callis first came to the industry-based service hub of Terrace for a four-month heli-ski guiding contract. That was 10 years ago.

“It’s a magic mix of community and great things to do in the outdoors,” says Callis, who skis, mountain bikes, kite surfs and tends a massive garden that sustains his and his wife’s produce needs year-round. “It’s a raw, mountainous, north coast landscape that hasn’t been groomed for the masses.”

Terrace only gets about half the rain as its coastal neighbors like Prince Rupert, but at only 196 feet above sea level and 37 miles from the ocean, it’s still a temperate rainforest, which means more gray than blue. That’s the trade-off for a place where the nearby ski hill averages a 130-foot snowpack at treeline come winter. Twenty-two miles west of Terrace, at the end of a winding, exposed dirt road lacking guardrails, Shames Mountain offers 1,600 vertical feet of skiing over 250 acres, accessed from a fixed-grip double chair and a T-bar four days a week. The snow is always plentiful (last February, it snowed 45 inches in a single day), it’s just a matter of water density. When it’s dry enough—as it often is this far north—the hill serves up plenty of fall-line powder runs, but the real allure of Shames, where half the skis in the lift queue are mounted with touring bindings, is its backcountry access. 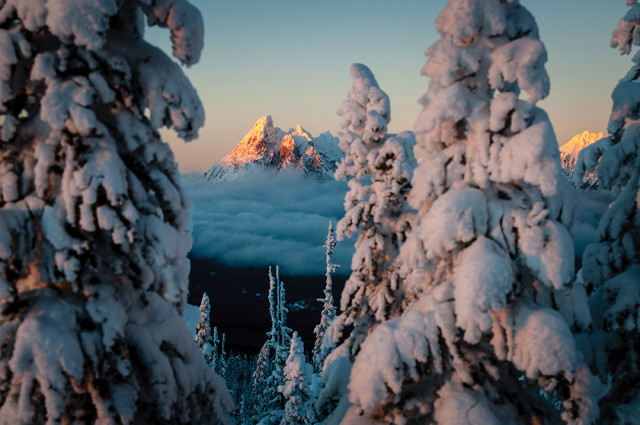 The views ain’t bad, either. Photo by Rikki Dunn

“It rivals any ski terrain on Rogers Pass, the Kootenays, Whistler or Southeast Alaska, and it’s accessible right off the lift,” says Callis, who routinely scores fresh tracks just by skinning one bowl farther each day after a storm. “There aren’t that many people, and most of them use the slackcountry.”

BackcountrySkiingCanada.com breaks Shames’ massive 7,800-acre tenure into 26 distinct touring areas split by the Shames River drainage. To the north, Shames Mountain Ski Area and a lineup of magnificent alpine bowls worthy of a heli-skiing homepage; to the south, epic full-day tours to rarely tracked places like Happy Valley and Valley of Instant Doom. In this area, connecting ridges, steep and varied terrain and snow that sticks like plaster creates a ski tourer’s paradise. The most user-friendly treed terrain, such as Zimicord Trees, Burnt Trees and Waterfall Trees, lies closest to the ski area. Farther out, big, complex alpine terrain like Geronimo Bowl, Hidden Lake, Super Bowl and Mt. Remo beckon ski mountaineers when conditions are right, which happens frequently with the forgiving coastal snowpack. But it’s the laid-back
community that resonates most with locals like Callis.

“There’s no scene, no chest pounding, no ‘look at my line’,” he says. “You could have skied the biggest, baddest first decent and tell everyone at the bar, but it’s no cooler than the guy’s 2-year-old who learned to snowplow that day. That’s the difference between Shames and places like Nelson and Whistler. It’s a down-home family atmosphere. Nobody comes here to get famous.” 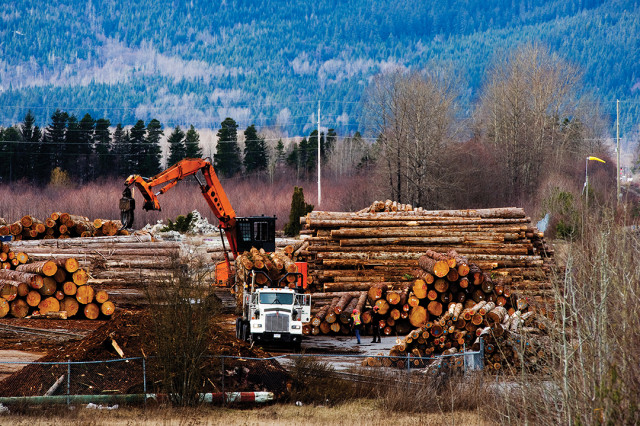 Logging in Terrace, BC. Photo by Mattias Fredriksson

That might ring true for its clientele, but Shames Mountain received plenty of press in 2011, when My Mountain Co-Op took over operations, creating the continent’s first nonprofit ski area. When the former owners threatened to shut down Shames Mountain if they couldn’t find a buyer, a group of local skiers raised just under $360,000 CAD and saved their home hill. By reducing operations to four days per week, keeping prices low ($47.62 CAD for a day ticket) and relying on volunteers to do everything from painting the lodge to hotwiring a generator on a record-breaking day of skier visits last season to keep the toilets flushing, the place has operated in the black ever since, with 20,000 skier visits per season holding steady. That’s in large part due to Shames Mountain manager Christian Theberge—Shames’ only full-time employee.

“Last season, when we should have been failing, our revenue was up,” says Theberge. “We’re not only able to sustain ourselves, but we’re able to repair and improve our infrastructure. I’d guess we’re doing better than 70 percent of the ski industry.”

While it’s a destination area for backcountry skiers, Shames’ remote location means its survival depends on its local community, which, fortunately, is as loyal as it comes. Last season, Shames sold 1,350 memberships at $299 CAD for individuals and $599 for businesses. A co-op business member donated a backup generator from a bowling alley, which Theberge traded for two smaller generators to cut Shames’ fuel costs by 60 percent. Eighty percent of the mountain’s workforce consists of returning staff. And Theberge estimates Shames’ volunteers save the mountain 20 percent on off-season labor.

“That’s what you really see from the co-op—pride in ownership and a willingness to help in the operation,” says Theberge. “Everyone feels part of the ski community.”

About an hour inland from Terrace, as we drive east on Highway 16 along the Bulkley River, the climate shifts dramatically. The cloud cover lifts to reveal wind scoured peaks, fir and cedar trees transition to spruce and pine, and farmland fills the valley floor. In less than three hours, we’ve reached the eastern slope of the Coast Range. Smithers, a mountain town of 6,000 with a pseudo-Swiss Main Street surrounded by Babine Mountains Provincial Park and Hudson Bay Mountain, has the ski-town aesthetic Terrace lacks. A combination of Swiss and Dutch immigrants, First Nations peoples, hippies, loggers, miners and a growing number of ski bums create a diverse community that sustains a ski hill, nine outdoor gear shops, a handful of ethnic restaurants and a progressive local government led by a 36-year-old mayor. 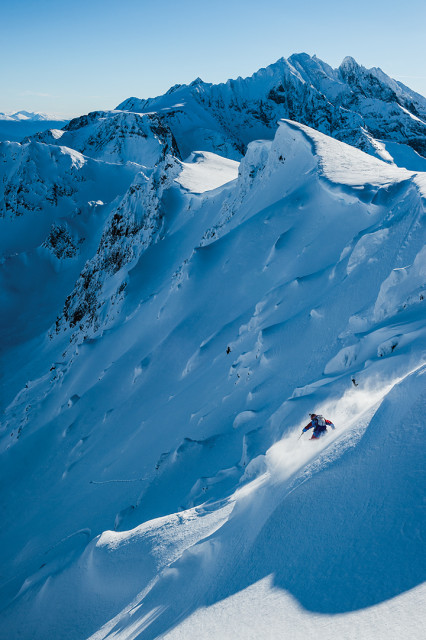 While we ski Smithers’ Hudson Bay Mountain Resort, friendly locals eagerly share why they love it. “We don’t get the big dumps, but we get 4 to 6 [centimeters] on a regular basis,” said one born-and-raised local who taught himself and his kids to ski on these slopes. He raved about the uncrowded terrain. “I almost always have every run to myself.”

Hudson Bay Mountain Resort’s two T-bars and slow triple chair access 300 acres and 1,750 vertical feet. The resort operates four days a week in the early season, five days a week in February and seven days per week in March for a $57 lift ticket. Monday through Wednesday, skiers skin up a trail from town to ski both the resort and skier-thinned sidecountry that extends skier’s left from the top of the resort. Backcountry opportunities extend another 3,000 vertical feet to the summit of Hudson Bay Mountain. The peak’s Kathlyn Flank is a classic tour. But the Hankin-Evelyn Backcountry Recreation Area—30 minutes from Smithers—offers the area’s best and only user-friendly, below-tree line backcountry skiing in the area.

Local innkeeper and backcountry skier Brian Hall, 65, dreamt up the idea of a lift-free ski area, found 9,300 nonmotorized acres of public land, gained support from “99.7 percent” of the community, secured provincial and federal grants (to cut ski runs, build a day-use shelter and maintain the access roads), and proceeded to chainsaw the ski area of his dreams. Seven years later, Hankin-Evelyn’s 13 runs, most around 65-feet wide, have been mapped by the Canadian Avalanche Association, and the day-use hut at tree line offers a warm launching pad to five alpine bowls.

Following Hall through Hankin-Evelyn, we skin an hour to the cabin, then duck in from the cold wind to light the wood stove. Inside, Hall tells us if it were snowing, we’d ski Run 8 and Run 8A (here, runs are named for purpose not press releases). But high pressure is on our side, so we bootpack up the ridge and look out at our platter of alpine courses: Chutes 1 to 3, Morning Bowl, Christmas Tree Bowl, Southside Chutes and Main Bowl. There’s no one in sight. We take turns making fresh tracks down the shoulder. 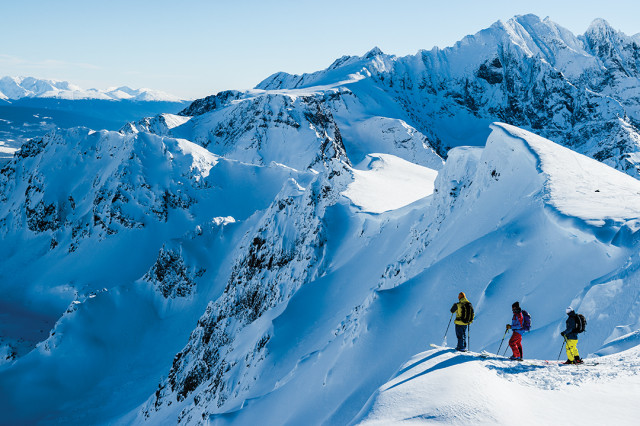 From early November to early May, up to 4,000 skiers tour in the zone. On a busy day, Hall says you might see 25 other skiers. The territory is growing Smithers’ backcountry skiing population, which is exactly what Hall had hoped for. “People can jump in relatively safely and learn more about the sport,” he says. “It’s easy for people in varying skills to ski in an area together, connect, form friendships and share experiences. It’s good for the health of our community.”

I leave the area with an appreciation for the rugged, wild North and a renewed confidence in the ski industry. If operations like Shames, Hudson Bay and Hankin-Evelyn can survive in a remote, sparsely populated corner of the world, there’s sure to be hope for the struggling mom-and-pop resorts of New England, right? Perhaps we need to
import the cooperative spirit of Northern BC.

This story originally appeared in FREESKIER Volume 18, Issue 3. Click here to subscribe and receive copies of FREESKIER Magazine delivered right to your doorstep. 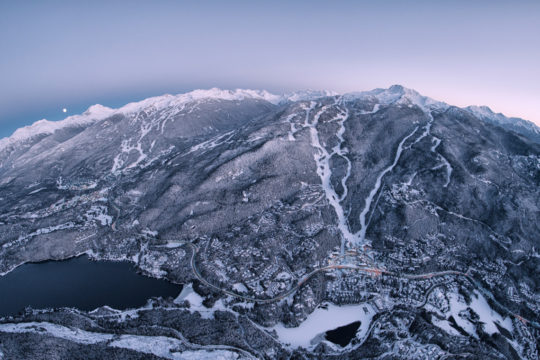 Skiing in western Canada will change your life; here’s the roadmap you’ve been waiting for