The text from Joe read, “Drew and I have preliminary dates for a Canada ski trip… You got plans around New Year’s?”

My response, attempting to sound genuinely interested in joining the ski trip but instead conveying an obviously noncommittal attitude, was, “I’m probably around, keep me in the loop as you continue planning.”

The next day, September 20, 2017, Joe—as is his custom—emailed us a comprehensive proposal detailing three separate itineraries. In just 24 hours, this trip north of the border had become a tangible reality. Yet, my brain gravitated toward excuses not to book a ski trip to kick off 2018 chasing powder snow across the Canadian Rockies.

I can’t take off work directly after the office holiday closure…
I should try and maximize family time over the New Year…
Should I save that money for something else?

I relegated the proposal to the back of my mind and went about my everyday business. Six days later, an email from Joe—subject line reading, “Your United reservation for Calgary, AB, CA…”—landed in my inbox. Joe’s message simply stated, “HELL YEA… BOOKED!” This email is followed up by one—now with the fourth member of the prospective trip, Phil, included—with a spreadsheet of possible lodging options. I hemmed and hawed for the next 10 days, still struggling with the fairly benign trip cons my mind had cooked up. After a self-feigned mental struggle, the epiphanic light bulb went off in my head. This trip was a no-brainer. With Joe working toward his MBA in Los Angeles, Drew a PhD candidate in Boston and Phil and I living along Colorado’s Front Range, this could be the last chance to take a group ski trip for the foreseeable future. I had to make this ski vacation with my buds happen. By the end of the day I was set to fly from Denver to Calgary by way of Vancouver on January 1, 2018. What ensued was two months of eager anticipation, daily resort web cam check-ins, storm tracking, stoked text message correspondence and an overall impatience as we counted down the days until we convened in Canada. And the result of tearing up the cons list and putting the trip on the books? One of the best weeks of skiing and camaraderie I’ve ever had.

So, you may be asking, “What’s the point of this long-winded story?” It’s to tell you to book a ski trip with your friends. By ceasing to drag my feet and committing to the tour of the Canadian Rockies I accumulated a lifetime worth of shared memories in a single week. 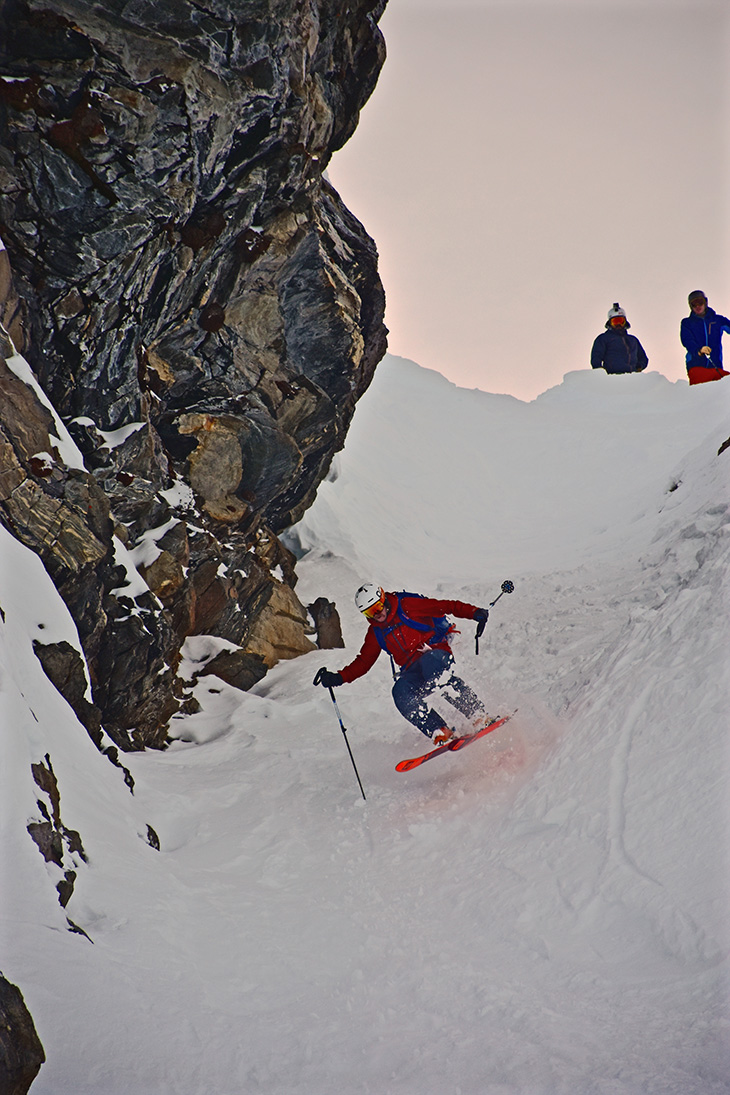 Every day, we stood in awe at the seemingly endless stretch of razor-sharp, snow-caked peaks that stood before us in Revelstoke, Kicking Horse and Lake Louise. We made soft turns off Revelstoke’s Subpeak three days after the latest storm. We hopped down steep, secluded chutes in the middle of Revy’s North Bowl and got lost in the zone’s outer boundaries—seriously, it felt like we were trekking through the wilderness of a Jack London novel. At Kicking Horse, the Golden Eagle gondola revealed what it’s like to travel from 4,263 feet in elevation to 8,033, and witness the transition from horror movie-esque fog and cold down low to warm, golden-tinted, “early-January in Canada” hues at the summit. The crew—well, mostly Phil—executed a flawless rescue of an ejected ski that went careening off of Kicking Horse’s Terminator Ridge. On one day of particularly low visibility, we dove blindly into the gray abyss of Lake Louise’s Back Bowls and came out clean at the bottom. And, we learned while après-ing at the Lodge of the Ten Peaks with a group of skiers from Calgary that, yes, there is a Canadian town called Dildo on the island of Newfoundland.

Skied above the clouds down gnarly chutes into and below the clouds at Kicking Horse. Definitely need to come back to this crazy mountain.

None of these experiences would have happened had I not followed my skier’s instinct and booked the trip. It had been four years since my last personal ski vacation with friends and I can’t believe it took so long to embark on another. There’s just something special about ignoring all responsibilities—at least for a week—and simply enjoying the incredible sport of skiing. I can’t wait for the next adventure.

So, don’t hesitate; collect your best ski buddies, pick a destination and book the trip. Because regret isn’t a feeling that should be associated with skiing. Turning pea soup to a family feast in Banff, Alberta