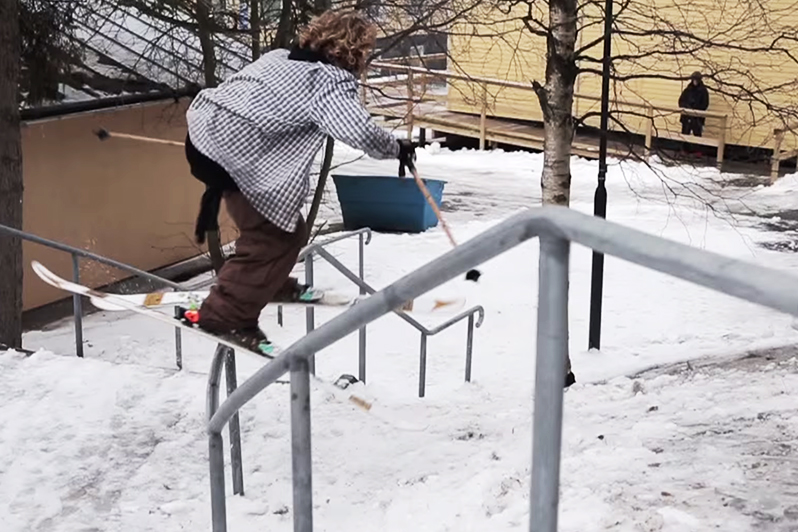 Last month, we asked all of you skiers out there to submit questions for LSM. The Swede chose a few of his favorites to respond to, from his rolling paper preferences, to clothing choices, to Level 1 stories and more.

We also gave the Level 1 and The Bunch star the opportunity to pick his favorite answer to award a Tomahawk Totem kit to. When you’re done reading LSM’s answers to your best questions, be sure to check out a new edit featuring LSM skiing indoor terrain parks across the United Kingdom.

Tyler Curle: What was your favorite trip/place you’ve gone to film in the past two years with Level 1 and The Bunch?

The most “baller” trip was when the whole Bunch crew went to Mt. Baker and were somehow able to rent this huge house for pretty cheap. It was three stories with a “sk8able cellar“; you know a tall ceiling, porch, stone staircase, etc. Then, we would ride up to Baker and ended up skiing mad pow for 10 days. It was also the first and only time I’ve eaten “magic food.” Baker was an amazing experience in many ways, what a trip.

Stephane Guenette: The hype surrounding TheBunch right now is impossible to ignore, but what’s up for you in the new year? What are your fears and aspirations for the upcoming season?

Yeah, hyped on the hype, so to speak… I’m doing stuff a little bit different but still figuring out how to make it all work. Ask me again in a month, Stephane! I’m definitely fearing going into wild but hella stoked on the adventure of those missions. Going to get on that natural skinning tip!

Brian Trausch: What was the turning point to start your career in skiing? Was it winning a comp? Filming a seg’? Or realizing that there is nothing on this earth quite as irresistible as clicking in to your skis and bombing some slopes?

Bombing down a hill is definitely the illest and has been the motivation the whole time. Without the drive I get from that, I wouldn’t have had the energy to put in the effort that it takes to build a career in skiing. Sometimes enjoying skiing isn’t enough start a career, though. There are also variables involved, like any other job: contacts, people skills, luck and timing. As far as the tipping point, you might say my season edit from the year before Superunknown was part of it, because once I put out my Superunknown edit, a couple of Level 1 boys already knew my shit. But, yes that Superunknown contest definetly gave me a platform, so that I could ski more, film more and in that sense give me a chance get a career going.

James Saarela: When you decide on an urban spot, do you have a specific trick you want to get (and only focus on that single trick), or is it more of a trial-and-error session with many attempts at many different tricks?

James, it’s very much trial and error for me. If I see the spot before I ski it and have a trick in mind before arriving at the spot, then I usually never end up doing that trick. It’s mostly because I’m being way too optimistic about speed or whatever. But, even then it’s a trial and error session to see what does work. I love to come to a never-before-seen spot without a trick in mind. I’ll start to hit it and see what happens. Then I have no expectations and in that sense more of a clear mind with more creativity.

Neil Smith: How does your hair stay so fresh?

It’s all about post-editing from a guy in Hollywood.

Evan Meyer: What drives your inspirations and creativity when you’re looking at a feature?

Evan, I don’t know what to call that drive or how to explain it. It might just be love for skiing and excitement to try and come up with something new. It could also just be an altered state of mind, loose body control and some luck! If anything, this creative business is full of some really random stuff.

Charles Landa: Do you take any inspiration from skateboarding? If so, which skateboarders have you been into lately?

Yeah, sure. I’ll watch a skateboard edit then I’ll watch a ski edit, then a snowboard one! It’s all shred to me and I like ’em all. Last skate edit I watched was Living in the bay, by GX100. Quite nice!

Samson Gold: Is it hard doing such creative tricks?

Yes! [laughs] What a weird question, Mr. Samson! But a genius one too! Is a 360 hard? Not really, is it hard to do a 360 that will make your homie that stopped skiing, want to go skiing again? Maybe not, but maybe, depending on the guy. But my point is that there are a lot of variables the go into doing a “creative” trick. In the park, features aren’t built for creative tricks. If they were, the tricks wouldn’t be creative in my opinion. Depends on how you look at. But is it hard to come up with creative tricks? Damn, it’s really hard to answer but I’m just going to say that it’s not so much about it being hard to accomplish something, it’s more about shredding than training and more about doing than thinking!

Tucker Stosic: Why do you think people are attracted to your skiing style?

Since style is everything, tricks are a part of your style and my tricks are maybe more relatable than your Olympic triple. But I’m basing that on myself being young and trying to learn some stuff. I’ve heard a lot of “no’s” and a lot of “yeah’s” about my skiing style but whatever trends come and go, I’ll still just be tryin’ to do me; constantly developing into new styles in areas that I enjoy.

Justin Woodruff: What’s the most difficult part of filming?

Justin, I’d have to say the most difficult part of filming for me is when the group your filming with is not down to work together. That’s why I like to hang and shred with the homies from TheBunch. We’re pretty much on the same page as far as putting in a lot of work for each homie to get that shot.

Papers or blunts? The answer is in this video

Tanner Pardue: Who originally taught you how to ski?

Jerome Ratte-Leblanc: What’s a trick that you’ve got in mind that has never been landed before?

K-fed and dub 12 mute! Nah, but it would be fun to learn some like switch 2s to nose presses and what not.

Michael Plattner: Lucas, how was your trip through three different indoor ski areas in 24 hours in the UK? What’s your opinion about indoor skiing and will you do more of it in the future?

It was my first days skiing this year, so definitely hella fun! I grew up on ice and hills as big as those indoor slopes, so the parks there were like the parks at my home mountain.