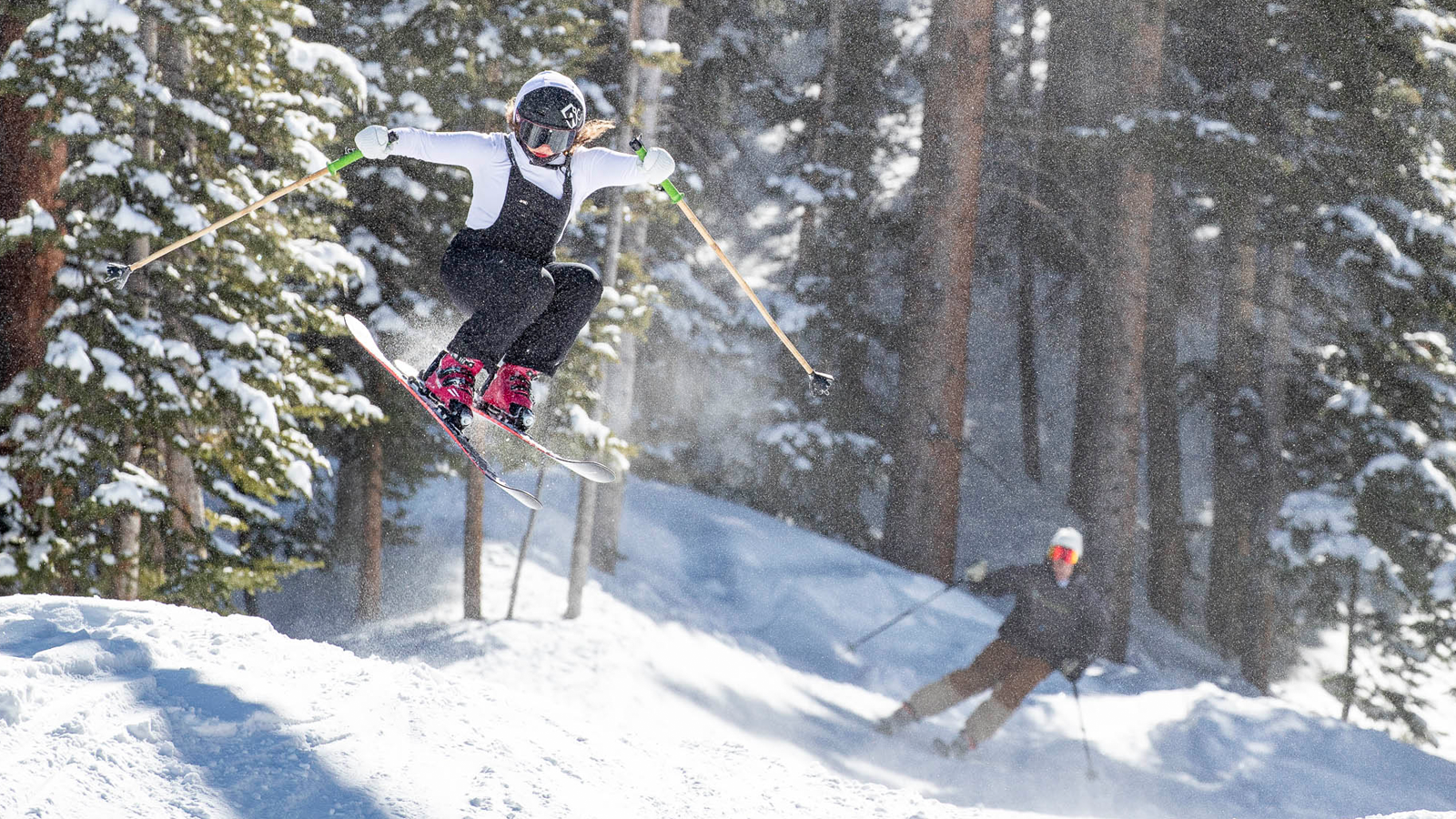 On our first ever ski date, my gal, Carly, and I skinned to the top of the Tiehack chairlift on Aspen’s Buttermilk Mountain just after sunrise. It’s a locals’ favorite adventure; a quick uphill, not all that steep or challenging, but you’re rewarded with postcard-ready views of the Maroon Bells. As she ascended, Carly chatted as if she was strolling on a sidewalk. I, on the other hand, who weighs as much as an elk but walks uphill like an asthmatic baby deer, struggled to keep pace, let alone talk. I had to stop to catch my breath, and I apologized for my lumbering lack of speed. Carly smiled and joked, “You’re not going that slow.”

We both laughed. I was, in fact, going that slow. I am always going that slow, especially on the uphill. And I am that slow on the downhill too, savoring the joy of the hippie wiggle and the grandpa shimmy. Carly, who climbs up mountains with the grace of a reindeer and skis down at molar-rattling speed, asked me if I was going to be cool with her skiing faster than me. Of course I was completely fine with it. How silly a question, I thought. But I quickly realized that she was truly asking if I, as a man, was secure enough in my own masculinity to feel unthreatened by her athleticism, and if that would be an issue or even a dealbreaker for our relationship. And that is not a question a woman should have to ask a man or worry about. Ever. Fellas, we need to change, and I think it’s time we men had a heart-to-heart about sexism in skiing…

First of all, just to undercut any eye rolling buffoonery; sexism exists in the world, skiing exists in the world, therefore sexism exists in skiing. And if you are still wrestling with that fact, thinking, There’s no sexism in skiing! well I am sure all the women earning 81-cents for every dollar their male counterparts earn would love to hear how we skiers somehow managed to close the wage gap, kill sexism and destroy the patriarchy that dominates the rest of the world.

Our ski culture is rife with sexism and misogyny. There are so many nauseating stories about a female skier so talented she can (place dry heave here) “keep up with the boys.” Over-sexualized ads like the Lange Boot girls are still commonplace, albeit far less than in the 1980s. Even this beloved magazine is not without blame: When it was still “Maxim in ski boots,” representing “Skiing’s New Lifestyle,” FREESKIER had a scantily clad “Gear Girl” spread for years, finally giving it the kibosh in 2015. It took nearly 70 years before Kim Beekman became Skiing Magazine’s first (and only) female editor-in-chief in 2015, before the publication was shuttered in 2017. And, prior to Powder Magazine’s demise, the storied ski mag didn’t have a female at the helm until Sierra Shafer received the nod in 2019; now, Shafer is the EOC of Ski Magazine, the first female head since the magazine hit newsstands in 1948. This is not because there are unqualified female editors unsuited to head operations. Rather, women’s qualifications in skiing are constantly and baselessly questioned.

Elyse Saugstad has run head on into skiing’s sexism for her entire career; her battering ram of accomplishments—winning the Freeride World Tour in 2008, the FWT’s “ Line of the Year” in 2009, the fact that she skis like a balletic rocket ship in boots—still unable to crack skiing’s wall of chauvinism. Saugstad addresses this in a new short film about her career, On My Own Terms. “I didn’t really have any doors open,” says Saugstad. “Across the ski industry, between ski companies to the production companies, everyone had this model of the one, token female. I didn’t have the chances I thought I would.” Simply put, the message to Saugstad was there was not enough room on brand teams and in ski films for multiple female storylines because the audience doesn’t care about women skiers. This was, and still is, complete horseshit.

Saugstad set out to prove that point by taking her career in her own hands. In 2012, Teton Gravity Research created a talent search contest called The Co-Lab. Saugstad was the lone female entry out of nearly 50 and, though she didn’t win (Dale Talkington garnered the top spot), her enormous cliff drops and powerful style earned her a segment in the contest’s DVD compilation. That, in turn, won her “Best Female Performance” at that season’s Powder Awards. But, still, the doors stayed shut. Finally, in 2018, she was invited to film with TGR, which earned her another “Best Female Performance” at the Powder Awards and FREESKIER “Female Skier of the Year.” Yet, despite her ever-growing list of accolades, Saugstad’s experiences with sexism continued, and aren’t unique to her…

In 2017, Caroline Gleich became the first woman to ski all 90 lines in The Chuting Gallery, a guidebook detailing the most challenging descents in the Wasatch Mountains. Upon finishing her historic accomplishment, Gleich was met with fanfare and acclaim. Just kidding. She was harassed by sexist dickalopes on social media, in person and had to publicly defend her incredible triumphs against rumors she fabricated descents and used guides to complete the challenge, rumors that Gleich feared would derail her ski career.

She addressed these rumors in a May 2018 Outside Magazine article, entitled “Misogyny and Sexism Will Not Defeat Caroline Gleich.” The gifted ski mountaineer recounted sexist confrontations with skiers; like, during an avalanche certification course where Gleich was the only female participant, her instructor boasted that he only dated women with martial arts training because they could fight back when he physically attacked them. “This habitual sexism is part of the reason only 10-percent of mountain guides are female,” Gleich wrote. “And why fewer than 25-percent of sponsored snow sports athletes for major outerwear brands are female, despite the fact that over 40-percent of skiers are female.”

It is worth pointing out that, yes, brands are doing great things for female skiers, like the K2 Alliance and Tecnica/Blizzard’s Women 2 Women program, among plenty others. However, there is also this: Ruth is a friend of mine who has worked in the ski industry for more than a decade. At a recent industry event, she was the sole female in a seemingly friendly conversation about navigating technical terrain. One of the men in the group said, “If you can’t ski the steeps, you probably squat to pee.” As if that wasn’t enough, this sexist ass hat looked directly at my friend, adding, “Right, Ruth?” This is not a joke, it’s not funny. The intention here is to demean Ruth, to make her feel inadequate; to let her know that skiing is a boys club, the members of which will hold up the pillars of patriarchy at all costs. Well, I say, fuck your boys club.

I can’t help but think about my friend Galena breaking trail on a devastatingly steep skin track during her third trimester—yeah, you heard that right. Now, maybe you’re saying to yourself, Hey, I break trail all the time! Well, not while you’re growing a human, bub. Sexism needs to be placed on the shelf next to wooden skis, leather boots and other outdated parts of skiing’s past; only we shouldn’t look at it with nostalgia, rather shame. And, boyo, if pointing out the deep-rooted sexism in skiing puts you on your heals, makes you defensive and angry, then I’d ask why and what it is that you fear you are losing by helping to destroy the tiresome, played out, agro, gnarlier-than-thou, dick measuring contest of sexist bro culture skiing. From the lift line to the skin track to the ski brand CEO, it’s time men grew up and grew out of archaic, chauvinistic ideas and actions. Your sexism is killing skiing.

The future of our ski community is best laid out by a thoughtful challenge first spoken by journalist Gloria Steinem: “Now we know that, say, women can do what men can do—most folks would agree with that. But we don’t know that men could do what women can do.” 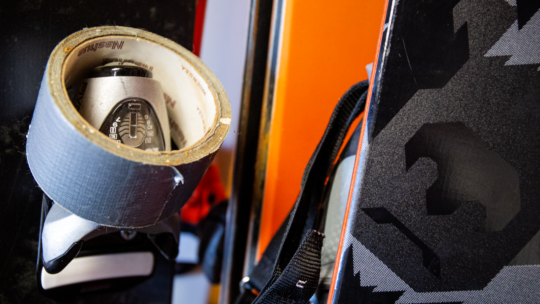