Published on December 1, 2017
by Tess Strokes 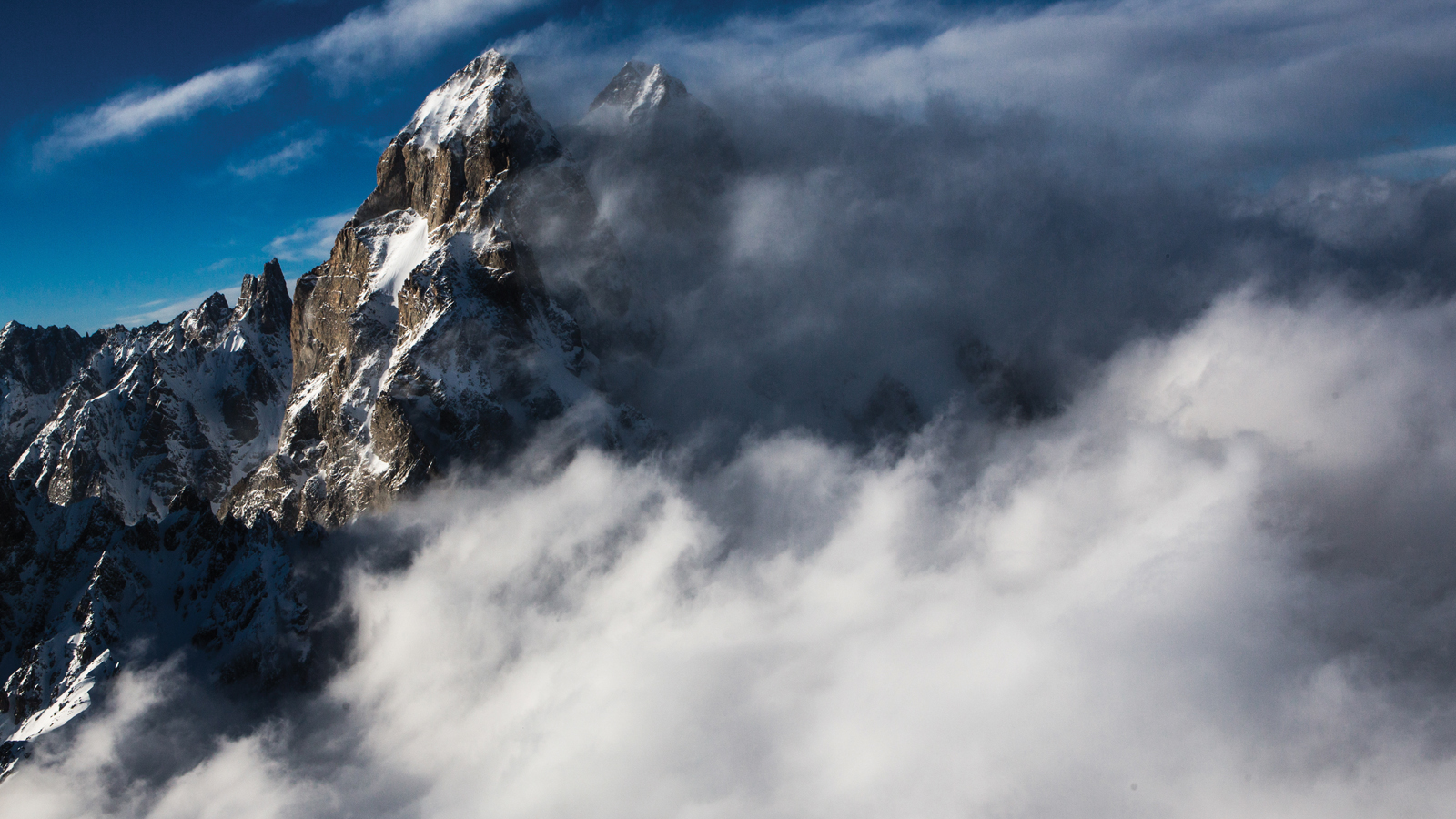 Between the Black and Caspian Seas, with Russia to its north and the Middle East to its south, the small country of Georgia contains four of Europe’s ten highest peaks. At 15,400 feet, Mt. Ushba is only the nation’s fifth highest peak, but its aesthetic double summit separated by only 66 feet in elevation is regarded as the country’s most challenging climb. Though Ushba is sometimes referred to as the “Matterhorn of the Caucasus,” unlike the Matterhorn, there is no easy way up it. Some of the most difficult routes have only been climbed a handful of times. Climbers have named the surrounding area “The Rotten Corner” because of unpredictable and difficult weather conditions. The mountain, shrouded in legend, claims the lives of mountaineers almost every year—four died on the peak in 2016—but its vertical rock walls and dramatic features continue to lure alpinists from around the world. No one had ever skied Ushba when Sam Anthamatten, Léo Slemett and Markus Eder embarked on a two-part expedition in April 2017.

Anthamatten, a 31-year-old Zermatt, Switzerland-based UIAGM mountain guide and former Freeride World Tour (FWT) competitor, first heard about Mt. Ushba in 2012 from his friend, the late ski mountaineer, Andreas Fransson (Finnish photographer Tero Repo showed a photo to Andreas) and the two had hoped to plan an expedition to Ushba together before Fransson passed away in 2014. “I’m always searching for impossible lines that are still somehow skiable,” says Anthamatten. “The peak itself, where it’s located and the fact it’s surrounded by glaciers makes it one of the more difficult 4,000-meter peaks to access.”

A photo of the peak served as Anthamatten’s screensaver for years, but he didn’t think about skiing Ushba until he met the owner of Heliskiing Svanetia, which offers heli-skiing on the flanks of Ushba, two years ago. The two came up with the idea of a film trip and reconnaissance mission on Ushba’s flanks. Anthamatten partnered with 2017 FWT champion Léo Slemett, a 24-year-old skier from Chamonix, France. Another former FWT competitor and star of Matchstick Productions’ ski films, Markus Eder, 26, of Italy, caught wind of the project and wanted to join the crew. At the time, Eder’s mountaineering skills lagged behind the others, but, he says, “As soon as I got my first ‘No’ from Sam, I started to get after it. A few ascents of north faces, ice climbs and thousands of steps later, I finally got his ‘OK,’ just a few weeks before the heli-skiing trip.”

In April, the team traveled to the Caucasus Mountains hoping to get acquainted with the area, meet contacts and learn about Ushba’s access and conditions. What the trio found was the best heli-skiing trip of their lives.

“No one knew how the skiing would be,” says Eder. “As soon as we got out of the heli the first time on a blue-bird powder day, the whole crew realized that we had stumbled over a gold mine.”

From Eder’s very first line, which included a 360 off of a 50-foot cliff, it was “on.” The three skiers found perfect powder, Alaska-style spines, steep faces, exposed, aesthetic ramps and more. They all called it some of the best skiing they’d ever had and one called it the best ski experience of his life.

The team first saw Ushba from the road, but didn’t see the north face—the route they planned to ski—until they were in the chopper. “I had seen photos of the peak with a lot of snow, but it was the complete opposite when we saw it from the air… it was black ice from top to bottom,” recalls Anthamatten. “And, it was much steeper and more intimidating than I imagined.”

Volatile weather fueled by warm, wet air from the Black Sea plagues the mountain, which offers a short or sometimes non-existent window when snow does happen to stick to the ever-present ice. Conditions of the Russia-facing north face, which is effectively invisible due to border regulations, remained a mystery. The team met with locals to learn as much as they could through broken English. Choosing a date to return and ski the peak proved difficult. All spring, the temperatures remained too cold to hold snow on steep north faces, and the strong north wind exacerbated poor conditions. After waiting for more than two months for things to warm up, the temperatures spiked to above freezing up high.

“It was a clear, white ice,” he says. “It snowed three days before and the temperatures warmed.” Anthamatten doubted their chances, but after a short discussion, it was clear that they weren’t turning around. They established camp at 9,514 feet that night, and the next day went for the second camp, 3,300 feet higher up, at the base of the peak—which meant crossing a massive glacier loaded with crevasses and hanging bridges so precarious, they were gone when the team crossed the glacier again two days later.

At 4 a.m. on July 10 the trio set out with crampons and ice axes, and Anthamatten and Slemett brought their skis just in case (Eder decided against it). From the shoulder, they traversed into what would have been the ski descent, dropped their skis, then ice climbed more than 1,600 vertical feet to the ridge.

On July 5, the day Anthamatten left for Georgia, he received a text from a Slovakian alpinist who had skied the southeast face of Ushba, marking the peak’s first ski descent. Three days later, Anthamatten, Slemett and Eder left Mazeri village at 5,250 feet in approach shoes and with skis strapped to their backs, crossing streams as they climbed up a valley that ended near a large waterfall. As soon as the mountain came into view, Anthamatten peered through his binoculars.

From there, it was only 700 feet to get to the summit, “which might sound like a short hike,” explains Eder, “but along this incredibly exposed ridge with sketchy, hollow cornices, rocky passages and unstable ice, every placement of our crampons and ice axes had to be on point.” Anthamatten, who is as respected for his guiding expertise as he is for his ability to descend mountains on skis at unfathomable speeds, led this section quickly and safely.

After a 13,000-foot technical mountaineering ascent to summit the peak, which proved the most difficult physical challenge either Eder or Slemett had ever experienced, they encountered an all-too-icy face that reaffirmed their decision to leave their skis behind. Bittersweet feelings of accomplishment on the summit quickly faded as they started the tedious descent, all wishing they were making turns instead of rappels. The team faced north winds of more than 30 miles per hour on an exposed ridge with large cornices. The altitude wore on Eder, but he remained steady. After nine 200-foot rappels they reached the bergschrund, and after two more rappels, Anthamatten and Slemett (who left their skis on the climb, while Eder left his at camp) were able to ski around 1,300 vertical feet to the base, yet, the skiing was a definite afterthought of the adventure as a whole. Twelve hours later, they climbed into their tents on the plateau, mentally and physically drained. Despite the challenge and the disappointment, Anthamatten, Eder and Slemett all say Ushba will remain in their hearts and minds.

“If you have climbed the mountain, you are one step further… one step closer to a descent,” says Anthamatten. “Maybe this line is only in ski condition every five or 10 years. Maybe this story is going to continue for a few more years.”

This story originally appeared in the January 2017 issue of FREESKIER (20.4), The Anniversary Issue. Click here to subscribe and receive copies of FREESKIER Magazine delivered right to your doorstep. 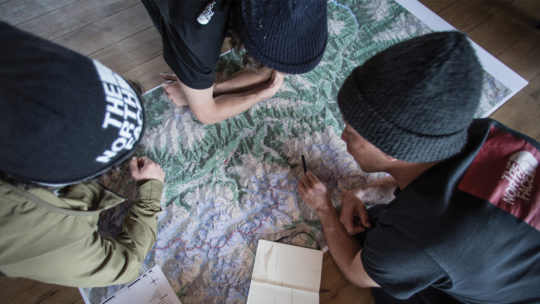