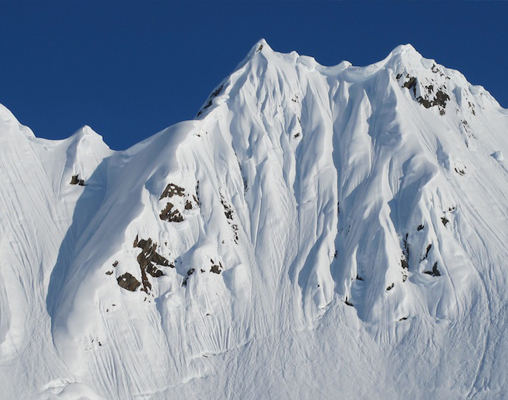 Staring down the short Alaska face, John and I made small talk about our lines, our season, and the lives we lead as competitors on the Freeskiing World Tour. They weren’t glamorous lives, mostly spent saving a buck or two by over-packing condos or clipping lift tickets, but our friendship had been nurtured through this life and brought us to where we were that day: standing atop a beautiful, semi-exposed venue with features that varied from rock and ice, to powder and wind lips. John was running a handful of competitors before me and since we had decided to ski similar lines I lingered on the ridge to watch his run and to pick up any hints I could about snow quality.

For reasons unknown, somewhere between when we wished each other well and when John left the gate, he changed his mind about his line. He pushed out of the gate and let out a small “whoop!” as he breezed by me and the entrance to our line. His new route—that several other competitors had skied as we had been watching, moments before—opened with a small air into a mandatory left turn.

There was no way John was lost, he skied so aggressively and confidently, he had just changed his mind. He sailed beautifully off the first air, his body silhouetted spectacularly against the waters of the Turnagain Arm in the bright spring sun, but then something happened. As he was initiating the must-make left hand turn, he either clipped a rock or high-sided due to the sheer nature of the turn he was making, and started tumbling. Once, twice, and then his body collided with a small rock buttress in the middle of the face with a sound I don’t care to put into words.

He’s dead, I thought, before immediately scolding myself for having such a brutally negative thought. But, as it turned out, he was. Right there, on the side of the mountain, the man I’d been bullshitting with only moments earlier, was gone.

At the time, John’s death was a bit of an irregularity—not entirely unheard of, but nonetheless odd. Since then, it seems like tragedies of this magnitude have become more and more commonplace. To the point that mainstream media, from Bryant Gumbel to Anderson Cooper, has taken note. It’s bad. The cliché, “he/she died doing what they love,” has become nearly irreverent. Blame the equipment. Blame the media. Blame the internet.

Are the inherent risks of the sport greater than what they were ten years ago? No. The inherent risks aren’t, but the risks that we expose ourselves to are. Hitting a 90-foot table is no more inherent to skiing than skiing a 60-degree spine; the risks are what we make them. So, will there be a movement to tone down these risks, progress differently, ease off the throttle? I think not. That’s not who we are as skiers. We can, however, learn. We can evolve.

“There’s been a lot of heavy accidents the last few years and they’re hard on your relationships, with your wife and family,” says ski mountaineering pioneer, Chris Davenport. “You start to think to yourself, is there a point where it’s happening so much that I change my life?” Following a bit of self-reflection, Davenport explains that the good in skiing far outweighs the bad, and our lives as skiers are gifts of primarily positive, poignant moments. “If you’re a race car driver and someone dies, do you stop race car driving, do you start driving more slowly? No. You go back out there and just figure out how to do it more safely.”

Davenport is right. There will never be a clairvoyant moment in which we determine x is causing y. Each incident is unique. However, within each tragedy there’s a unique lesson, and collectively there are pieces of a solution. There should be no stigma, whether it is collective or individual, that critically analyzing these incidents is betrayal. To the contrary, it allows the individuals we have lost to continue to enrich our skiing experiences, even after they’re gone. 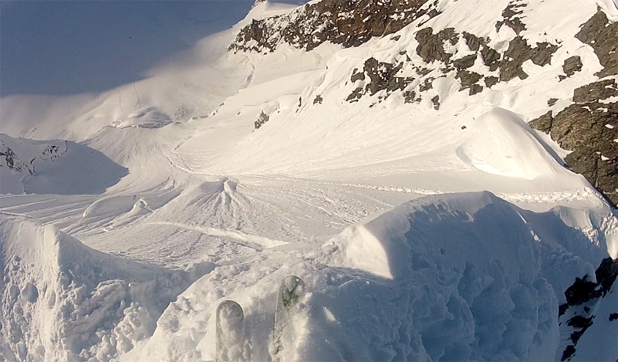 Exposure: A crevasse at the bottom of this 1,500′ spine wall in Valdez made this entire slope a no fall zone.

Few skiers have remained in the limelight for a period as long as Glen Plake has. Regardless of what people know about Plake—his iconic mohawk, and his skiing legacy, from Blizzard of Ahhhs to present day—Plake is hands down the most passionate skier out there. For a guy that has every right to be jaded after decades in the industry, he is as stoked to ski hard packed bumps as most people are to ski waist deep powder. His handling of the Manaslu avalanche in September provides a framework for how skiers can pay homage, yet be brutally honest with themselves and others.

“They were definitely sitting ducks if anything came down,” says Plake about those stationed at Manaslu’s camp III, without a hint of condescension in his voice. While Plake’s camp was situated away from the bulk of tents in camp III and, as it has recently come to light, out of the main slide path, he was nonetheless involved in the secondary slide, resulted when his tent, and others, were blown off their platforms in the headwind of the primary avalanche. Although victims of a secondary slide, Plake’s tent mate, Rémy Lécluse, passed away. “We got hit by a freaking tornado. A remnant tornado of the avalanche coming, so that makes me feel good that we weren’t in fact sitting ducks like, unfortunately, some of the other guys were. [Afterwards] you could see, a little bit lower than our platform, a small slab crack that came off and I think our tents landing on the snow actually started that slab activity.”

Plake speaks with a no-nonsense tone that is simultaneously respectful of all the people who perished. He is critical of their mistakes, but in a way that can’t be misconstrued as anything but constructive. Maybe it comes from the better part of a lifetime spent in the mountains, or perhaps a deeply founded love that wrote off quitting a long time ago. Whichever, the man with the mohawk can teach us that mourning, evaluating, celebrating and moving forward can be done simultaneously. While he “gave up on [himself] a long time ago, as far as [him] being able to pull the strings,” Plake doesn’t hesitate to get on the stage. 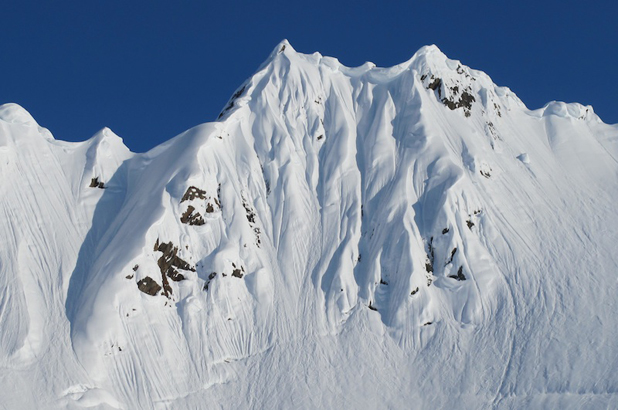 The day after John died the organizers finished the contest, running the handful of competitors that hadn’t gotten to compete. It was another bluebird Alaska day, although less spectacular. There was a service at the top of the venue, followed by mostly conservative skiing on the same contest venue.

World champions were crowned. I was pissed. Angry. It didn’t seem right, like we were somehow downplaying what happened. In retrospect, however, it was exactly the right thing to do. As skiers we are a resilient bunch. Our entire sport is based on going out in conditions that the majority of the world actively avoids. When forecasters say “bad weather,” we hear “good weather.” Our sport is fraught with adversity and defined by perseverance, and the emotional aspects are no different.

Within every tragedy lies a piece of the puzzle that, as agonizing as it may be, we must come to terms with. There’s no disrespect in doing so, no detraction from the contributions that these people have made, but rather, one final, perpetually lingering contribution. Whether it is wearing a helmet on the mellowest of days, digging one extra snow pit or simply backing down from something because it just doesn’t feel right, we can continue to honor these people and grow stronger as a community.

There may always be phone calls that consist of a “Hey,” followed by pregnant pause and ensuing bad news. However, there doesn’t have to be as many. As a community, as a brotherhood of skiers, there are solutions and silver linings in each heartbreak, and it’s up to us to find them and practice them.

3 thoughts on “Long Live the Dream: How skiing can persevere in the face of tragedy”