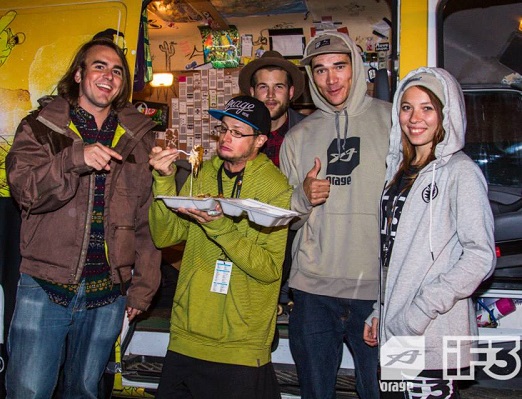 Day two of the 2013 installment of iF3 is in the books. Films were screened, autographs were signed, poutine was devoured (by Andy Parry), and adult beverages were consumed.

The screenings kicked off at 5 p.m. EST with Insight by Aspen, CO based Vital Films. The five minute edit showcases how skier Aidan Sheahan skis in a conscious way.

SKLMNTI, from Latvian filmers Skilluminati hit the big screen next. There was a ton of interest in the film, thanks to a segment of the teaser involving an angry man wielding a handgun, and the film didn’t disappoint. The film is mysterious and gritty, an attempt to shed light on the relatively unknown skiing culture in the tiny Baltic country of Latvia. The struggle for success from these young urban skiers is evident, whether it be the frustration of dealing with a winch breaking down, or the will and determination to return from injury, as was the case with Einars Lansmanis who broke both of his legs and knees after being hit by a moving snowmobile and left to die. Doctors thought there was no point in saving either one of his legs, but after having external fixators placed on his legs and two months spent in a hospital bed, Einars left the hospital in April 2013 with one thing on his mind, getting back on skis. Einars earned a huge round of applause from the crowd when he gets back on skis after sustaining such a gruesome injury. From there, the crew experiences one of the scariest moments of their lives when a man pulls a gun on them, furious for their lack of respect for his property. The crew escapes but will never forget April 7, 2013, a day that featured “life changing moments that make you contemplate life.”

The next screening was They See Me Trollin’ from 4bi9 Media. The episode is a farse on the traditional ski documentary interview, featuring Steve Stepp and a cast of pro skiers discussing why he is a mediocre skier, at best. Chris Logan, Will Wesson, Freedle Coty, and Schui Baumann then came out on stage to introduce Partly Cloudy from Level 1 Productions. Reactions were similar to those at the world premiere, held in Denver, CO last weekend, with huge applause for each and every segment.

An autograph session with athletes from D’Structure and Line Traveling Circus ensued, including Alex Beaulieu-Marchand, Andy Parry, Steve Stepp and Will Wesson. This past week, Parry and Wesson stated that they would give away Orage and Line shwag to the first fan to bring them poutine at iF3. A lucky young skier surprised Parry with a healthy helping of that delectable Canadian concoction of cheese, gravy and potatoes, and began to devour it in front of us all. 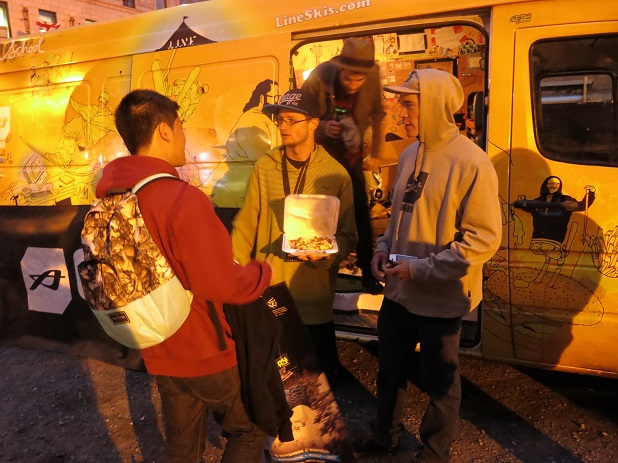 A lucky fan gets some free shwag from Andy Parry and Will Wesson. Photo by Donny O’Neill.

Two films still remained to be seen, Time from PVS Company and Supervention from Field Productions. PVS caught the attention of the crowd thanks to a balls to the wall urban segment from Estonia. An unique aspect of this film was a segment involving shots of a classical piano player dispersed between some amazing big mountain skiing that provided added drama to the already high consequence lines. From there PVS profiled the talented Sildaru kids, Kelly and Henry, as they romped through the terrain parks at Mammoth Mountain in California. The film finished up with a great segment from Julian Regnier and Kevin Rolland, who take a page out of Candide Thovex’s book as they shred a french resort from top to bottom in the spring, encountering bumps, jumps and banks along the way.

The next film up was the highly anticipated Supervention from Norway’s Field Productions, which we review here.

After the onslaught of amazing ski cinematography, it was time for the Retro Ski Party presented by Spy Optics at Club Soda. The main attraction was the photo booth, where eager fans and party goers could show off their retro ski garb and interact with pro skiers and industry folk alike. 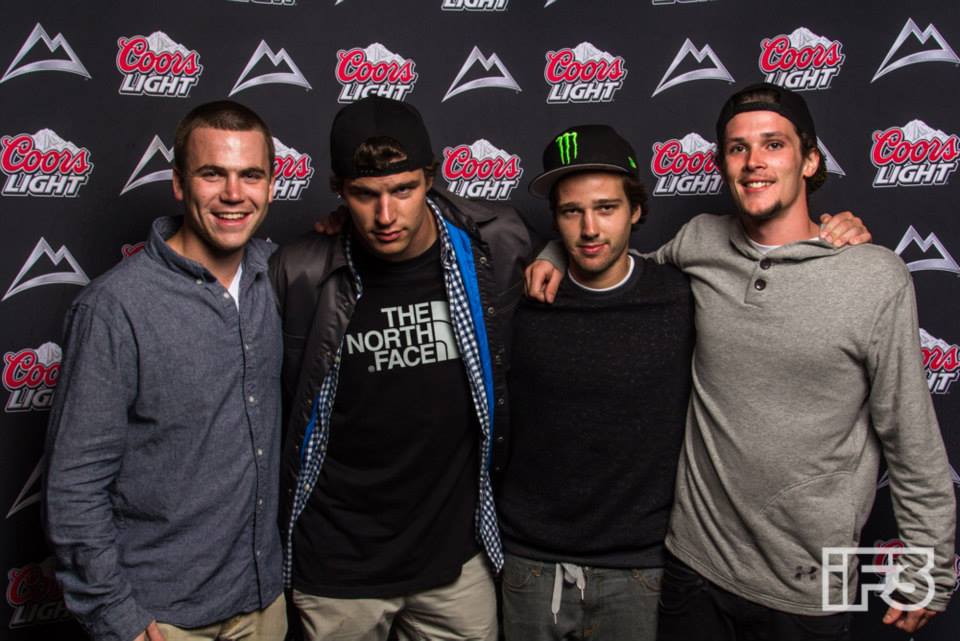 The crew from Stept Productions poses for the camera at the Retro Ski Party. Photo by Maxime Messier.

The action continues today with movie screenings throughout the afternoon and the iF3 Movie Awards taking place at 5 p.m. EST. After that, films like Into the Mind by Sherpas Cinema and Tracing Skylines from Poor Boyz Productions will air, before the rowdy Sean Pettit and K2 Rocker Party rounds out the night.

Related: Recap: iF3, “The Cannes of the Ski World,” kicks off from Montreal

5 thoughts on “Poutine, retro ski gear, spectacular ski films and more from Friday night at iF3 2013”