In the spring of 2017, Dover, Vermont native Devin Logan, 24, was skiing down the in-run of a jump at Mammoth Mountain’s Unbound Terrain Park, in California. Logan— the 2014 Olympic silver medalist in slopestyle, five-time Association of Freeskiing Professionals World Champion, three-time X Games medalist and 2018 Olympic hopeful—had hit jumps of comparable size literally thousands of times before, but in this particular instance, “not gonna’ lie,” she explains, “I was s#itting my pants during the drop-in.”

Logan’s fear stemmed from the fact that instead of landing on snow, to which she was accustomed, she would momentarily be falling from the sky and touching down on a giant airbag—192 feet long, 76 feet wide and angled on a 30-degree slope. Only three such airbags exist in the world and this was the first time that one of the monstrosities had been situated, one, on a snow-laden surface and two, on an incline. “I’ve heard a lot about these [airbags] and was skeptical with the downward slope, because I felt like I would try to land and my legs would just split apart,” Logan explains.

Worse, Logan over-rotated a 720 and—in an uncharacteristic display—landed smack on her face. “I didn’t feel a thing, though,” she says. On her second go-round, she impacted the bag awkwardly and believes that had she landed similarly on snow, she would have “destroyed” herself. But she was no worse for the wear.

The Progression Airbags, as they’re known, are utilized by athletes for training purposes, allowing them to attempt tricks in a realistic setting with decreased risk of injury. Considered “great, big, pillow-soft air bags,” by one skier’s account, these creations are in fact ultra-durable; they resist sharp ski edges and ski poles and they’ve also been used by professional snowmobilers, motocross riders, BMX and also mountain bikers, all with heavy-duty equipment. The bags come in a variety of shapes and sizes, but, as aforementioned, only three of the 200-foot variety have been produced. Two of those three bags are currently in use at “dryslope” facilities—one outside of Montreal, Quebec, the other in Park City, Utah—and only one has been integrated into a true snow park. That’s because inflating and setting-up these bags on snow is extremely difficult. The terrain park-building experts at Mammoth Mountain are credited with achieving the feat, and frankly, no one is surprised; it’s the sort of park-building prowess that attracted the U.S. Ski & Snowboard Teams to Mammoth many years ago and kept ‘em coming back each year since. The two parties are currently locked into a partnership that will see skiing and snowboarding’s top slopestyle and halfpipe contenders training at Mammoth each year until 2019. The Level 1 crew had a very heavy session on a private jump that we built for them… It was a jump that scares me just thinking about it,” said Mammoth’s Dawoud. The Level 1 video shoot, hosted in spring ‘17, is just one example of how Mammoth regularly caters to the needs of the world’s foremost ski and snowboard film production companies, alongside its work with partners like the USSA.

Being the official training grounds for the U.S Ski and Snowboard Teams is something Mammoth takes great pride in. Mammoth Mountain has supported freeskiing formally since it introduced the Mammoth Freeski Team back in 2000. Since then, Mammoth has hosted ten-plus years of Grand Prix Olympic qualifying events. Mammoth has also served as the naming site for both the 1998 and 2014 Olympic snowboarding teams, and it will serve as the naming site of the Pyeongchang-bound freeski and snowboard squadrons in January of 2018. Mammoth even employs two full-time, dedicated freestyle coaches. The resort’s drive to host events and support terrain park skiing is strong; Mammoth desires to provide athletes with the best possible training grounds on an everyday basis. Of course, the stakes rise when Olympic-caliber athletes roll to the hill for competitions or annual High Performance Training Camps in the spring-time—it was during the latter that Logan first had a go at the airbag.

When the idea came about to place a Progression Airbag on snow, on a downward-facing slope, 34-year-old Tariq “TJ” Dawoud, the Unbound Terrain Parks Director, laughed at the project’s implausibility. But, it’s what the U.S. Team wanted, and so Dawoud and his team set a plan in motion, then executed—like they always do.

“The question I always get is, ‘How the hell did you make that work?’” Dawoud explains. His short answer? Collaboration. “As a team, you’ve got to make changes on the fly when you’re working with snow. It melts and freezes, then melts and freezes again… conditions are changing every day. My favorite part of my job is problem solving. And you just keep problem solving the s#it out of things until you figure it out. That’s the truth if I’m being 100 percent honest.”

The humble Dawoud doesn’t wish to take much credit for building the jumps that the world’s top skiers and snowboarders rave about. He does acknowledge that of the estimated thousand or so jumps he’s built in his career as a terrain park shaper, “every one of them gets the same amount of care and attention to detail as the one before it… the biggest or the smallest, they all matter to [him] equally.”

That thoughtful approach is perhaps the reason that skier and 2018 Olympic hopeful, Alex Hall, 19, calls Mammoth “the best place to ski in the world in the springtime… with good weather, tons of snow and a terrain park that is absolutely dialed.” Even when Hall is not training at Mammoth in an official U.S. Team capacity, he’s there on his own; he spent the entire month of May and some of June there, this past year.

It’s why Olympians like Nick Goepper and Bobby Brown, 23 and 26, respectively, do the exact same as Hall—posting up at Mammoth for weeks on end in the springtime, learning new tricks under the bright California sun, with soft-snow conditions enabling worry-free learning. US Freeskiing Pro Team Slopestyle Coach, Skogen Sprang, confirms, “Mammoth builds some of the best jumps and rails in the world.” And when it comes to hosting US Team-sanctioned events, he says, “Mammoth is super easy to work with and they’re always willing to do basically whatever they can to help us, whether it’s farming snow or building special features.”

Regarding the on-hill use of the airbag this past spring, Sprang says it’s impressive to see a resort step up and bring a seemingly impossible idea to fruition. He says it shows the resort’s “dedication to being cutting edge.”

Not only did Mammoth find a way to place the Progression Air- bag on snow, the resort also built an exact replica of the airbag jump immediately to its side, with a traditional landing; once an athlete perfected a trick on the airbag, they’d be able to mimic the stunt on a mirrored take-off and landing.

Despite the initial skepticism and those first couple of spills on the airbag, Logan says, “I learned to love it so much.” She adds, “the impact on the body is so minimal, you can [hit the airbag] day after day. It makes trying a trick you have always wanted to learn become a reality. It’s extremely life-like in terms of replicating an on-snow experience. It’s a huge confidence booster and it helps to speed up progression.”

When you see Logan performing “unnatural” tricks—i.e. rotating in a non-dominant direction—in Pyeongchang in February 2018, you can imagine that she perfected those maneuvers via Progression Airbags. When we interviewed Logan for this article, she was in Europe with the U.S. Team enjoying early-season training, just a couple of months before Olympic qualifying began. “The airbag has already worked for me because after so much training on it, I have already put some new tricks to my feet here on snow. It’s really changing the game,” she asserts.

For Dawoud and the Unbound Parks team at Mammoth, Logan’s statement is like music to their ears. Their mission is simply to help change perceptions of what is possible for an athlete with a pair of skis strapped to his or her feet.

“The energy I put into [building parks] is exhausting. I’m pushing myself and I’m pushing all of the people I work with,” says Dawoud. “What keeps me going is seeing athletes come back time and time again ready to do their job—ready to push themselves and push the sport.” 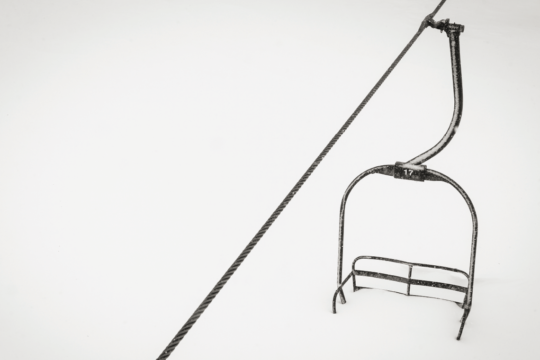