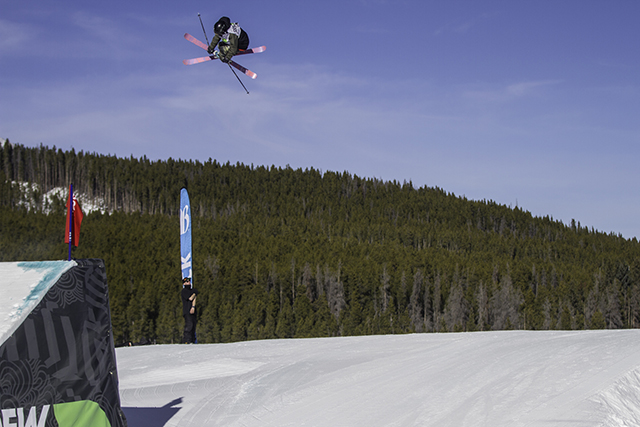 The 2014 Winter Dew Tour kicked off at Breckenridge Ski Resort today with women’s slopestyle semifinals atop the Freeway Terrain Park. The Colorado resort definitely did not hold back this year, as Breck has produced one of the most massive slopestyle setups imaginable, boasting huge jumps with clean transitions and smooth rail setups. Each of the sixteen athletes competing proved worthy of the task at hand as they battled for just six positions in Saturday’s slopestyle finals.

The format of the 2014 Dew Tour women’s slopestyle semifinals was as follows: Sixteen competitors battled it out for six positions in finals. Each athlete took two runs, with their best score of the two counting. At the end of the second run, the top five scorers advanced to the finals. The following eight athletes (spots 6-13) then competed in a one-run, last chance qualifier (LCQ). The winner of the LCQ grabbed the final spot of six in Saturday’s main event.

The morning was highlighted by a series of 900s from fifteen year old Maggie Voisin. After an uncharacteristic fall on her first run, the Whitefish, MT native linked up a switch left 900 mute to right 900 on the final two jumps, catapulting her into first place with a score of 83.50 on her second attempt.

“I was definitely a little nervous after crashing on the first rail of my first run,” says Voisin. “But I just went into my second run, took a deep breath and put it down. I’m so stoked and so grateful to be in the top spot.”

The second place position in semis was held down by New Hampshire’s own Julia Krass. Krass handled the burly course with ease as she spun back-to-back 720s in both directions throughout her run, earning her an 80.25. The third spot was occupied by Anouk Purnelle-Faniel out of Québec, Canada. Like Krass, Purnelle-Faniel also showed off her ability to spin both ways with a smooth 720 as well as a nice 900 in her run. Purnelle-Faniel’s rotations proved to be enough to score a 77.25. Rounding out the top five were Emma Dahlström (77.0) and Keri Herman (76.25).

Of the remaining competitors battling it out in the LCQ, it was Kim Lamarre who flaunted her style to earn a spot in the big show on Saturday alongside the already named top five. Lamarre stomped a sick run, including a 270 on to 270 out on a rail feature and a very stylish zero spin on the second to last jump into a switch 720 on the final jump. The crazed Canadian’s efforts earned her a 76.75.

Listen: Kim Lamarre on making it through to finals via the LCQ

Women’s slopestyle finals are going down on Saturday, December 13 at 1:30 p.m. Be sure to tune into @FreeskierLive on Twitter for all of the action and dewtour.com for a live stream of the event.