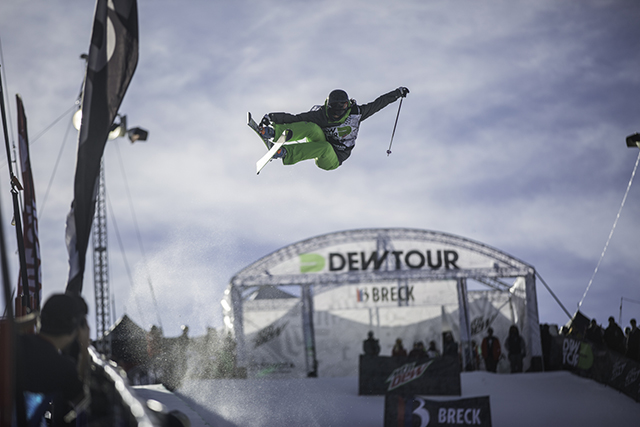 Sixteen females from across the globe met atop the halfpipe at the 2014 Dew Tour women’s superpipe semifinals event this afternoon. The sun was shining bright and the halfpipe at Breckenridge, Colorado was near perfect as the ladies strapped on their skis to battle for six available positions in superpipe finals on Friday, December 12.

The format of the 2014 Dew Tour women’s superpipe semifinals boasted a best of two run contest. At the end of the second runs, the top five scorers advanced to the finals. The following eight athletes (spots 6-13) then competed in a one-run, last chance qualifier (LCQ). The winner of the LCQ grabbed the final spot of six in the main event.

It was Annalisa Drew who made the biggest statement today. Although the East Coaster was already in first place after her first run, Drew took to the course on her second bid and landed a right 540 mute, a left 900 safety, an alley-oop flat 540 Japan, a left 540 mute, a flair, a left 720, and a switch right 540 to secure her top qualifying spot with a score of 84.75.

Japanese slayer Ayana Onozuka proved that her third place finish at the 2014 Copper Grand Prix was not a fluke. Onozuka maintained her amplitude throughout the pipe and boosted some technical tricks including two smooth 720s with secure grabs earning her an 81.25 and the second place spot. Olympic gold medalist Maddie Bowman celebrated her 2014-15 competition debut with a third place semifinal day. Bowman flaunted a stylish 900 as well as a big ol’ fashioned straight air to please the crowd, posting a 78.00. The top five was rounded out with solid performances from Janina Kuzma—winner of last week’s Grand Prix event—and Virginie Faivre.

The last chance qualifier round was Roz Groenewoud’s moment to shine. Roz G showed great consistency throughout each of her two first runs, but didn’t manage to snag a spot in Friday’s finals until the LCQ. The Canadian included a big mute grab, a flair and a stylish last hit 720 into her run, posting a score of 73.00 and grabbing the final spot of six available in finals.

Note: Devin Logan did not compete due to a shoulder ailment that she suffered earlier this week.

Women’s superpipe finals are going down on Friday, December 12 at 9:30 a.m. Be sure to tune into @FreeskierLive on Twitter for all of the action and dewtour.com for a live stream of the event.