From Legos to non-Newtonian polymers: How Renoun Skis is revolutionizing ski construction 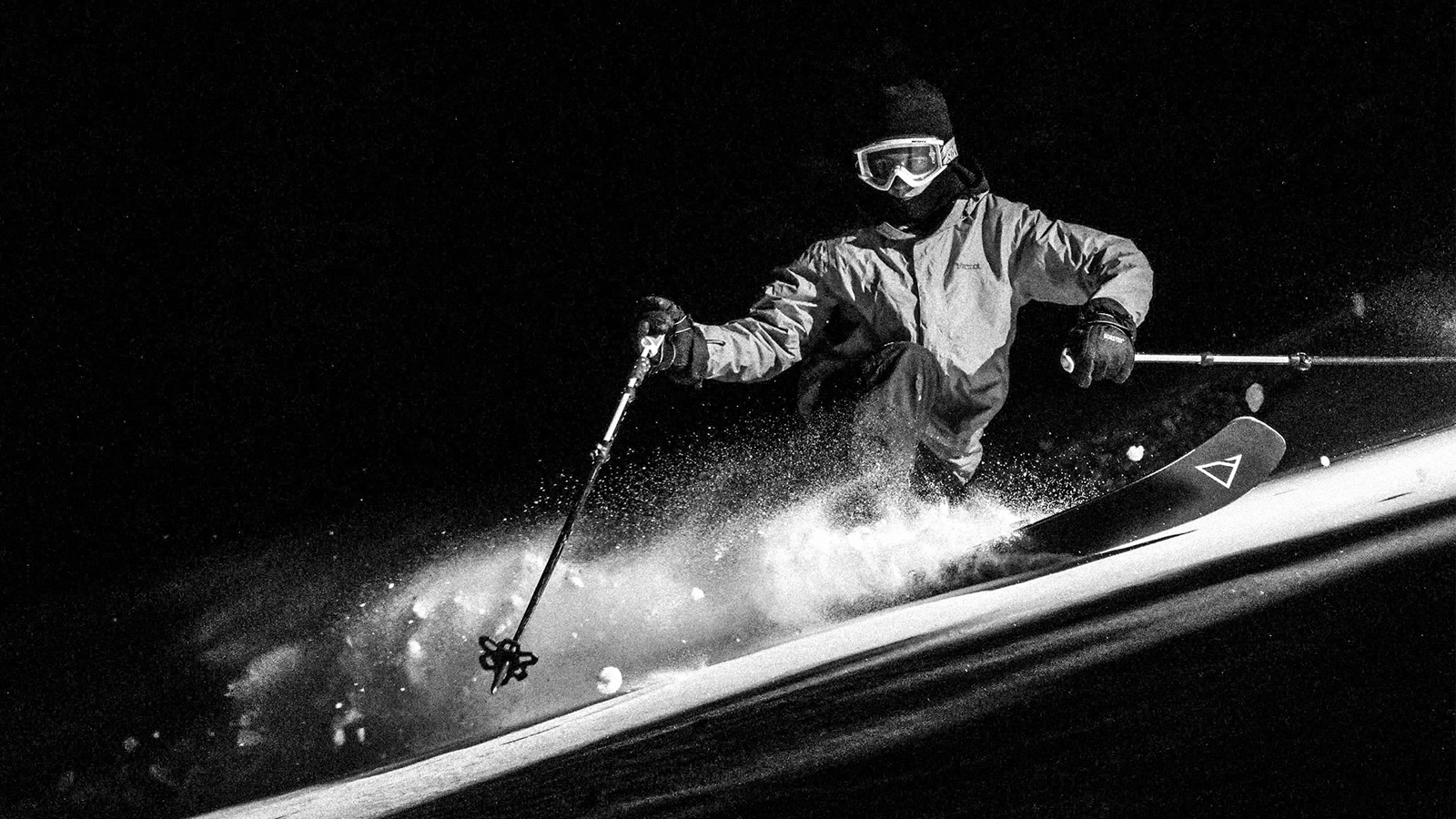 From Legos to non-Newtonian polymers: How Renoun Skis is revolutionizing ski construction

The Hollywood script reads like this: Curious kid turns into brilliant student, drops out of college, spends three years tinkering in a garage, invents a product so damn cool it will shake up an entire industry— somehow, is still doubted—yet, eventually, proves everyone wrong.

The only caveat? It almost never happens in real life.

Renoun Skis, a ski brand based in Burlington, Vermont, is quickly becoming an exception to the rule. The brand’s mastermind, Cyrus Schenck, grew up in northern Vermont and always had a knack for building things, from Legos to homemade catapults, even remote-controlled airplanes. Now, he and his small team are focused full-time on revamping the way skis are constructed, beginning with what’s inside.

It’s been a long time coming for Schenck to invent something groundbreaking. In his early twenties, he studied aeronautical engineering in upstate New York at Clarkson University and took a prestigious engineering internship with General Electric during college—but dropped out a semester later, during his junior year, realizing he didn’t want to work for the proverbial “man.” As a lifelong skier, the obvious choice was to become a ski bum but he had other plans: to start his own ski company.

“The inspiration [for Renoun Skis] came from a material science class in college. We were studying non-Newtonian polymers, stuff that behaves differently than most elements. Most materials—wood, concrete and glass, for example—are predictable and have a predictable bending pattern. Non-Newtonian polymers act the opposite,” explained Schenck, now 29-years-old, “they break all those rules.”

Connecting the dots between the non-Newtonian materials and his favorite pastime (skiing), Schenck saw potential for a ski that would react differently to chop, crud and chatter. “I didn’t fully know what that meant, so I built some skis with this non-Newtonian material and tested them. Turns out, they worked far better than I ever even imaged.”

For the elementary scientists out there, non-Newtonian fluids harden when force is quickly applied to them and soften when the same pressure is exerted slowly. Schenck admits the process was a lot of trial and error. “Like most millennials, my research started with a lot of Googling and experimenting. Making a ski is basically [like making] a big Panini, you just squeeze layers together with glue. I had to figure out how to add the polymer to create damping at the right frequencies.”

His original intention was to create skis that performed like stiff, ultra-responsive racing skis when going fast, yet softer and more responsive at slower speeds all while remaining lightweight. “It’s science, not magic,” explained Schenck. “A ski that feels stable at speed means it doesn’t vibrate much. I eventually found a layup that feels three times stiffer when skiing fast or aggressive, yet still remains subtle when taking it easy. [Keeping the skis] lightweight is just a bonus”

In a ski industry filled with marketing hyperbole, Schenck wanted empirical data to back up his claim of game-changing innovation. “Skis are just sticks that slide on snow, but I knew we had to have hard data to stand out. Research and Development continued and [it] got granular, testing types of epoxy, shapes, curves and polymers.”

So, in addition to learning to build skis, Schenck enlisted the help from friends at Clarkson University to actually put prototypes on a test bench (called a shaker-table) to empirically determine the best layup and composition of the non-newtonian polymer. “Nobody had ever done this before so we had to go through many iterations to get it right”. And, eventually he did get it right and it became the basis of every ski to come out of the Renoun factory since.

Developing the technology was only part of the battle. Soon Schenck had to scale production and break into a manufacturing world dominated by just a handful of major players, household brands with longstanding heritage in the skiing community.

Schenck eventually found a manufacturer in Canada and drove across the border to meet in person; to teach the production facility about his design, he cut a pair of his skis in half.  The factory workers were impressed with the innovative design and, within weeks, were making the first run of Renoun samples. Soon after, in similar guerrilla fashion, Schenck contracted with a fulfillment center, allowing him more time to develop the Renoun’s business strategies.

In his first year of business, sales grew organically and slowly, mostly from friends and people he met personally on the chairlift. To really grow the brand, he needed others to vouch for the product.

“Our big break came a year later in 2015 at the ISPO trade show, the largest event in Europe. We didn’t know much about the show, how important it is to the European market. At the time I was out West, selling skis out of the back of my truck and only had 45 skis to our name. Still—somehow—we won ISPO Gold, the show’s biggest award.”

To stay solvent, Schenck washed windows for businesses around Burlington. He likes to joke that Renoun Skis was funded by a squeegee. It wasn’t until 2018 that he went full-time into making Renoun a business and has been steadily adding to the Renoun roster ever since. Unlike most ski brands, Renoun only sells direct, through its website, because they see an untapped opportunity that starts with close customer relationships. “We typically grow 50 percent each year and are on a similar pace for this year.”

Since then, Renoun Skis has adapted the same vibration-absorbing technology, called VibeStop, to be implemented in surfboards and basketball floors—under the name Mission V; just last year, Schenck and his team installed the first of these high-tech athletic floors at Penn State Altoona. Not many ski companies can claim a technological progression that goes beyond the sport.

Right now, the ski industry is in a transition phase, searching for new business models, customers and unique ways to reach the community. Renoun Skis poses a fresh solution to a years-old problem, boding well for the up-and-coming brand. “The industry is shifting faster than ever and with it there will always be new challenges. Right now, it’s an exciting time to be at the leading edge of that shift.”

Today, Renoun produces a wide array of planks ranging from on-piste carvers to wide, powder-crushing surf sticks. And every ski comes standard with the brand’s proprietary VibeStop Technology, including the Endurance 88 and Endurance 98 for all-mountain carving, and the Citadel 106, which was an award-winner featured in this year’s Buyer’s Guide—you can read more about the Citadel via the review below. Now, if you want to cop a pair of your own futuristic planks from Renoun, head to the brand’s website because its entire lineup is sold exclusively online.

From the 2021 FREESKIER Buyer’s Guide:

After three years of development, the Citadel 106 is ready for its big debut. Burlington, Vermont-based Renoun Skis is a budding brand utilizing proprietary, non-Newtonian polymers in the core of each ski to create a downhill experience that seamlessly adapts to the conditions. As the ski is exposed to faster speeds and bumpier snow, the high-tech VibeStop core material actually hardens, effectively dampening the ski and decreasing chatter; in other words, the faster you ski, the stiffer the ski becomes. It’s unlike anything else on the market and will certainly pique the interest of tech-oriented riders.

“This was my first time riding a Renoun ski and it was very interesting. The HDT allows for the ski to stay stable during high speed turns while staying super soft and noodley in bumps which is so different from any ski I’ve ever been on.” 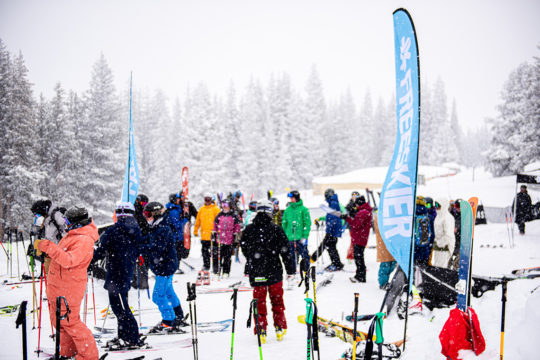 [Gallery] Next year’s skis, as seen at the 18th Annual FREESKIERFEST