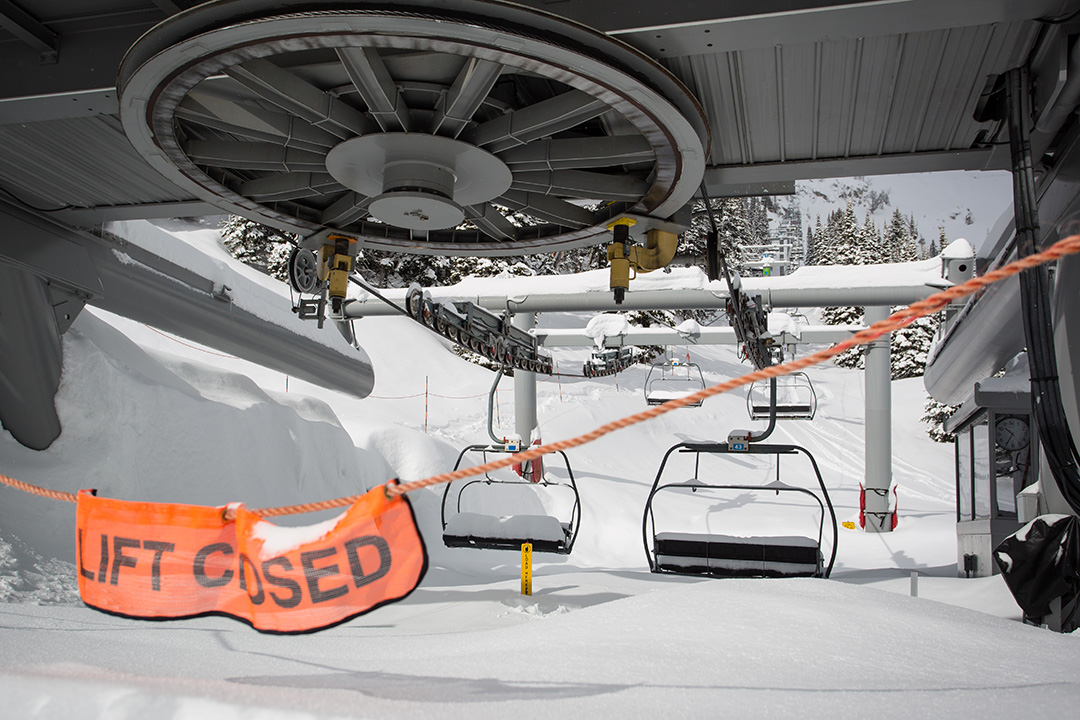 On Tuesday, February 7, 2017, a violent storm marched into Jackson Hole, Wyoming. Mother Nature unleashed heavy snow and powerful winds that ranged from 50 miles per hour at the Jackson Hole Airport to 90 miles per hour in Teton Village, home of Jackson Hole Mountain Resort (JHMR). The gusts were so powerful that they crumpled 17 steel electric transmission towers—many of which were situated along Wyoming Highway 390, the main drag into Teton Village—leaving the resort and surrounding area without power, forcing a five-day closure.

“On Tuesday evening, one steel transmission pole folded over and it just took 16 others with it,” explains Brian Tanabe, communications/marketing manager for Lower Valley Energy. “Transmission poles are a big deal, they carry a lot of power, so to see such devastation, we immediately knew that this was going to be bad.”

“Jackson Hole Down,” by Lance Koudele.

Teton County declared a state of emergency for Teton Village on Thursday, February 9. Avalanche danger was rated as extreme. The scene along the stretch of Highway 390 was straight out of a monster movie, as if Godzilla or some other colossal mutant had come and gone, leaving a path of destroyed infrastructure for the residents to deal with. The initial destruction was the tip of the iceberg, as the storm continued to rage. The weather event was a warm one, depositing moisture-laden snow one minute and bone-chilling rain at lower elevations the next which led to sloppy conditions down low and a very touchy snowpack in the alpine.

Locals were stunned by what was taking place.

“Experiencing this first-hand has been really surreal. The resort has never seen something like this in its history,” said Anna Cole, communications manager at JHMR, on Friday. “To have a closure of this amount of time is unprecedented.”

“I’ve seen nothing quite like this before,” adds Jon Bishop, risk/safety manager at JHMR. “I’ll never forget the surreal scene of downed power lines, extreme wind and blowing snow.”

“We went from all-time conditions one day to rain all the way up to 8,000 feet the next, it was surreal,” says local skier Forrest Jillson, who has lived in Jackson his entire life.

“I have worked at JHMR year-round for 26 years. I have witnessed a lot of crazy weather and events. Nothing will ever come close to this. I hope I never have to [see it] again,” John Fournelle, JHMR’s lift operations manager, further details.

“I moved here in 1996. I certainly haven’t seen something like this and in the 80 years of Lower Valley Energy, the company has not either,” notes Tanabe. “It was pretty monumental and surreal to see these huge steel structures just folded over.”

The common descriptor among folks who witnessed the outage first-hand: surreal. People were asking themselves, “is this really happening?”

Shutting down operations in the midst of one of the best winters in recent history—JHMR has received 434 inches of snow this season—could have been catastrophic. Resort operations aside, the effects of the storm could have had dire implications for the people living and traveling in the Jackson Hole area. Travel was almost impossible and Lower Valley Energy estimated that at the time of the outage, 3,500 to 4,000 residents were without power, with an initial guess of five to ten days to restore electricity.

The outlook was grim, but the community acted fast. Lower Valley Energy staffers worked around the clock to replace the steel power poles with wooden ones to get electricity flowing. JHMR sent snowcats to remove snow from the roads to give Lower Valley Energy access to the pole locations. Five utility companies from neighboring regions—High Plains Power, Idaho Falls Power, Fall River Rural Electric, Bonneville Power and Wasatch Energy—provided assistance and equipment to Lower Valley Energy. By Friday night, after a herculean effort, the temporary wooden electric poles had been put in place and Lower Valley Energy began preparing to flip the on switch.

At the resort, with the snow continuing to fall on the upper mountain, JHMR ski patrol performed daily avalanche mitigation to ensure that when it was time to spin the lifts, the resort would be in good shape. Members of the resort’s staff slept in their offices, burning the midnight oil to keep the resort functional and to send out updates of the ever-changing situation to eager skiers, residents and visitors.

The last day #jacksonhole was open. 2 days ago the wind took out the power lines and now the pass is closed, resort closed, extreme backcountry avy danger and pouring rain in town. What to do now? Speed dating i guess, #single. #jhdreaming of reopening, #snowpocalypse #wyoming PC @timswartz

“Unfortunate things occur. How we responded to this event defines the character and the quality of our staff at Jackson Hole Mountain Resort,” says Jon Bishop, risk/safety manager at JHMR. “Many employees were stuck while various roads were closed for days at a time. Some slept in their offices, others made room for their co-workers in their homes.”

“A lot of the departments were shorthanded because of Teton Pass, Snake River and Hoback Canyons being closed,” Fournelle adds. “At one point the only way into Jackson was by airplane. A lot of workers were separated from their families and sleeping on friends’ couches.”

Finally, in the early evening of Saturday, February 11, power was restored to the area, and on Monday, February 13, JHMR opened for business having received over five feet of snow in Rendezvous Bowl in the past week. The Bowl currently has a snow depth of 135 inches, the second deepest it’s ever had. While the resort is up and running and skiers are undoubtedly enjoying the chest-deep stashes spread across the mountain, the challenges that were faced by the resort, the local government, emergency services personnel, Lower Valley Energy and the residents in the town of Jackson shouldn’t go unnoticed.

Hurdles were prevalent at the restoration site. The weather was bad, flip-flopping from snow to rain with wind being an ever-present factor. “It’s never good to be working out in rain and cold and it’s certainly a little more difficult to dig and plant poles,” explains Tanabe.

To make matters worse, Highway 22 over Teton Pass, Highway 89 through Snake River Canyon and U.S. 189/191 through Hoback Canyon were all closed at times. “Another issue was getting parts. We had hardware trucked in from Salt Lake City, Boise, Denver and Arkansas and those road closures put a little tamper onto that part of the restoration.”

Up on the mountain, sub-par working conditions also existed. With the power out, the only lift that could operate was the tram, which runs on its own generators and diesel auxiliaries. The lift operations team couldn’t access the tops of the other lifts for five days, many of which had chairs that were buried under the snow. “Once we were able to access the lifts it was all hands on deck with a fleet of 25 Honda snowblowers,” Fournelle recalls. “It took two days to get everything dug out. The effort put in by all departments was amazing.”

The lack of power also affected the patrol staff, who worked tirelessly on avalanche mitigation in the midst of a strong storm cycle and were forced to think outside the box to control the snow. “Electricity is one of those things that you take for granted until it’s not available,” says Drew Kneeland, a JHMR patroller since 1994. “Things such as radio repeaters, Gazex exploders, cell phones, building heaters, fire suppression systems, ski lifts and lighting are all affected by the lack of electricity. We’re fortunate to have a strong team of resourceful people who are capable of working around these obstacles.”

38" of new snow since Tuesday morning and the #jacksonhole Ski Patrol is hard at work ensuring the mountain is safe for our guests when we reopen. Thanks JHSP for all you do! And we are #stilljhdreaming about the tram firing up very soon. #jhdreaming 📷 @davidbowersphotography

And when all work was done for the day, the folks involved had to deal with the effects the storm had at home. Fournelle says that resort staff members and town residents were arriving home to buried houses and driveways. “We were going home and having to shovel roofs to keep them from collapsing,” he describes. “We were working 12 hour days [at the resort] and then shoveling at home for another three or four hours.”

When it was all said and done, the town, resort and the community made it through safely through the incident and subsequent restoration of power. By banding together, being patient and lending a hand wherever was needed, the restoration occurred in four days, rather than the five to ten days originally predicted.

One image that Tanabe will never forget, and one that perhaps paints the picture of the power of this community the best, occurred on Wednesday morning, at the beginning of the relief efforts. “It was kind of a cool picture Wednesday morning to see JHMR’s fleet of snowcats coming out to the [restoration] site to help us. They just hit the ground running, getting rid of snow around the site so we could get our trucks in.”

Fournelle’s most memorable moment was at the end of the day on Sunday. There was so much snow at the tram loading station at the resort summit, that the lift could only have 10 people aboard to make it into the dock. “We had to dig 20 holes, each eight feet deep and put 25 pounds of explosives in each hole for a snow excavation shot,” Fournelle describes. “Once that was detonated we had enough clearance to fully load the car, and at that point I knew the tram was back.”

And while it was a trying event for everyone involved, Tanabe, for one, is impressed and inspired by the energy that exists in the close-knit valley of Jackson Hole. “It was an incredible experience to see the community come together, their patience, their understanding, everybody was fantastic,” he gushes. “It’s a great community we live in, it’s a great community we serve.” 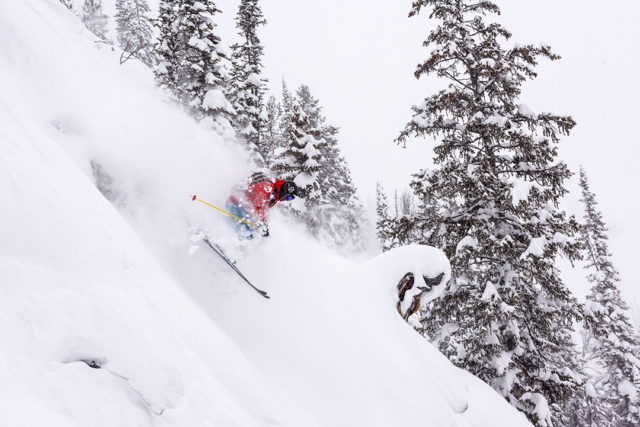 3 thoughts on “Clean-up in Jackson Hole: How the community rallied together to restore power and get back to skiing”