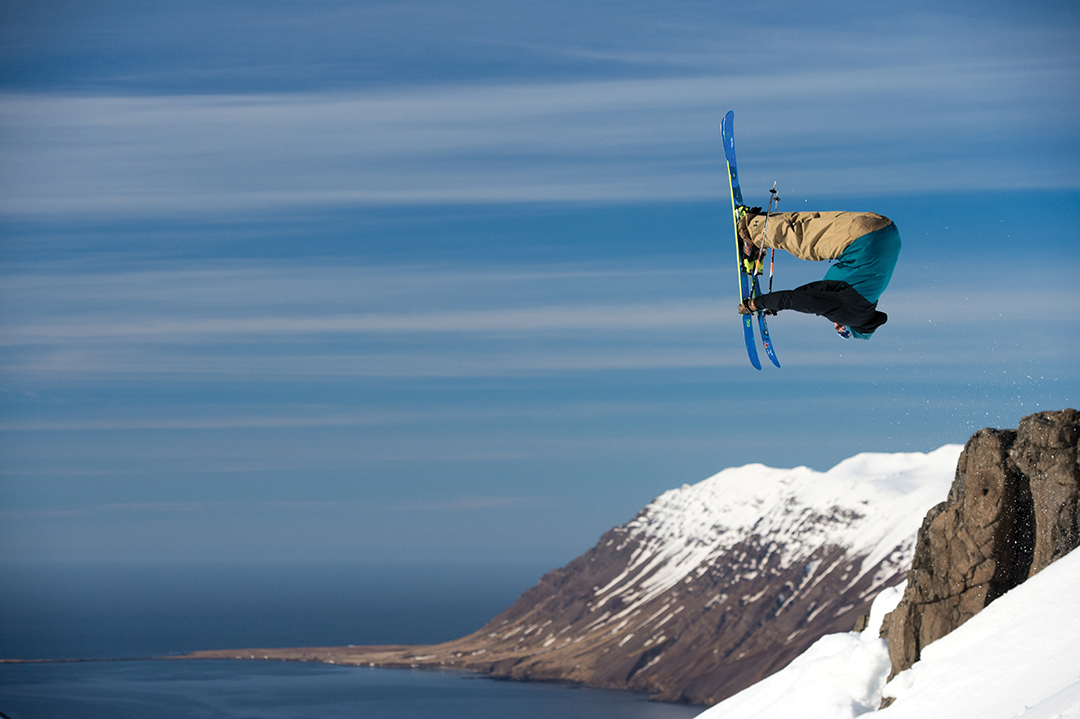 The 20-something Icelandic passport officer’s flowing blonde hair seemed extraordinarily long for a man in his line of work, but he was all business.

“What is the purpose of your trip?” he asked.

Without missing a beat he responded, “In Iceland?” I might have detected a hint of ridicule in there. I couldn’t be sure, but either way, our trip was off to a rather inauspicious start. Skiers have been coming to Iceland for years, and he should have known that. And not just backcounty tourers and heli-skiers. Ski areas are scattered around the island. One in Akureyri holds a freestyle comp that attracts skiers from all over Europe. Pro snowboarder Halldor Helgasson is even from there. But I guess the incredulity really lies in the question, “Why go to Iceland when there are sicker, more accessible skiing options elsewhere?”

It was easy to ponder that question while sitting indoors on our second day in the northern seaside village of Siglufjörður, watching it relentlessly piss rain and reflecting on our fi rst ski lines of the previous day. While waiting for the rest of our crew to arrive, Markus Eder and Tanner Rainville had hiked up an all but barren mountain rising above town to arc tracks down a few dirty, slithering strips of snow—the remnants of northern Iceland’s meager season. Now, the rain was laying waste to those lower scraps. Spring had sprung, and the two dubbed the country “Slushland.” We could only hope for better conditions above the prominent snowline sitting at roughly 1,000 feet. The problem is, Iceland’s peaks only rise a couple grand above that.

Ordinarily, this would have been a time of stress—when nature takes a sledgehammer to optimistic expectations. Dreams of late-May powder and wrapping up the filming of MSP’s Fade to Winter with a bang were being shattered into tiny pieces. But to be honest, I hadn’t come into the trip expecting much. I don’t think any of us did. Iceland is bucket list material, but not necessarily because of its potential as a ski destination. I could easily visualize featureless terrain; nuking winds; pitiful snow; and gray, stormy days, which do skiers no favors on white landscapes devoid of trees and definition. Flat light and zero features equals skiing by braille.

Instead, the allure of the place was its mystique and natural splendor: Wide open spaces, thunderous waterfalls, wild horses, geothermic hotspots, rugged coastline, beautiful women. Or so we were told to expect. I admit, the thought of getting in a surf session or two had me as excited as the prospect of skiing. Anything we filmed on snow would merely be a bonus.

You might also enjoy: MSP Films’ Fade to Winter premieres in Denver, CO

Maybe it was unfair to have that frame of mind. Because in hindsight, while Iceland’s peaks don’t rival Alaska’s plastered spines nor Norway’s fjord-land majesty, the skiing is legit—if you can time it right. We’d been invited to Iceland by Eleven Experience, a renowned travel and guiding operation, and their Instagram feed showed a crew shredding powder on the highest peaks just a week prior to our arrival, so our hopes for deep snow were alive.

Unfortunately, it’s safe to say our timing was a little off. Things had turned in a hurry. The glory runs plunging down the fl anks of the Troll Peninsula towards the ocean were instead dry, crumbly rock. And the coast—blanketed with golden grasses swaying in the breeze—reminded us more of central California’s shores than a coast mere miles from the Arctic. Regardless, we were in freakin’ Iceland. And we were going to find out what the place had to offer. 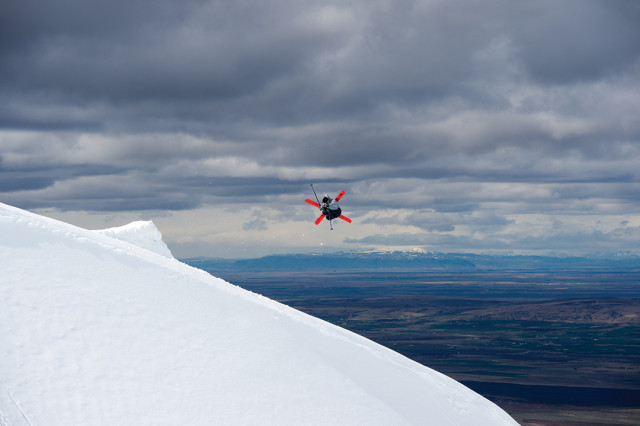 The region is a geological marvel: Hawaiian-like, gnarled mountains erupt from the sea, while slightly inland is a vast volcanic wasteland that can really only be likened to Mars. Geothermic activity rules the land, and everywhere you look there is steam rising out of natural fissures and hot creeks tumbling across the mountainscape. Resourceful Icelanders tap into nature’s energy, using the heat to power villages all over the island. Ironically, all that seemed to be missing in Iceland was the ice.

Just as the rest of the crew rolled in—Bobby Brown, PK Hunder and Aaron Blunck—a two-day storm petered out, providing us glimpses of the upper reaches of the surrounding peaks. Decked in a brilliant shade of white, they showed so much promise. We wasted no time loading the bird. There we were, flying above low lying clouds, azure blue waters and mountains not too far off in appearance from those in Alaska or Norway. Three thousand-foot peaks striped with basalt cliff bands appeared in every direction, and though coverage was thin, the place was teeming with potential had it been a bigger snow year. Given the right snowpack, there was no reason skiers couldn’t produce film magic here.

Then, we stepped out of the heli. Crunch. Jumping off the skid into the snow is supposed to sound like poof. All we got was crunch. Crunch. Ugh. One by one, we broke through the thick crust encasing a foot of new snow. It clearly had rained on even the highest summits at the tail-end of the storm, and the entire snowpack was saturated mank with an icy frosting. Only a chilly wind reminded us of winter. With the shaded aspects out of the question, our guides figured the sunny sides would at least be skiable, and we shredded some serious schmoo down to a heli pickup. Ever stoked, Markus smiled, shrugged his shoulders and said, “Still fun!” And that would become the theme of the trip.

Any preconceived notions of skiing rowdy lines, shredding powder, launching cliffs and general sendy-ness had been instantly erased the moment our ski boots broke the plane of crust. Markus philosophized, “The snow isn’t that good. But it’s still snow. So… it’s awesome.” With that attitude, our brains shifted into salvage mode. “What can we make happen? How can we still have fun?” Fortunately, skiing has so many answers. The joy is out there, waiting. It’s not always going to be dished out on a platter. Sometimes you have to go search for it.