Can I Have This Dance? A first-timer experiences FREESKIER Fest in all its glory 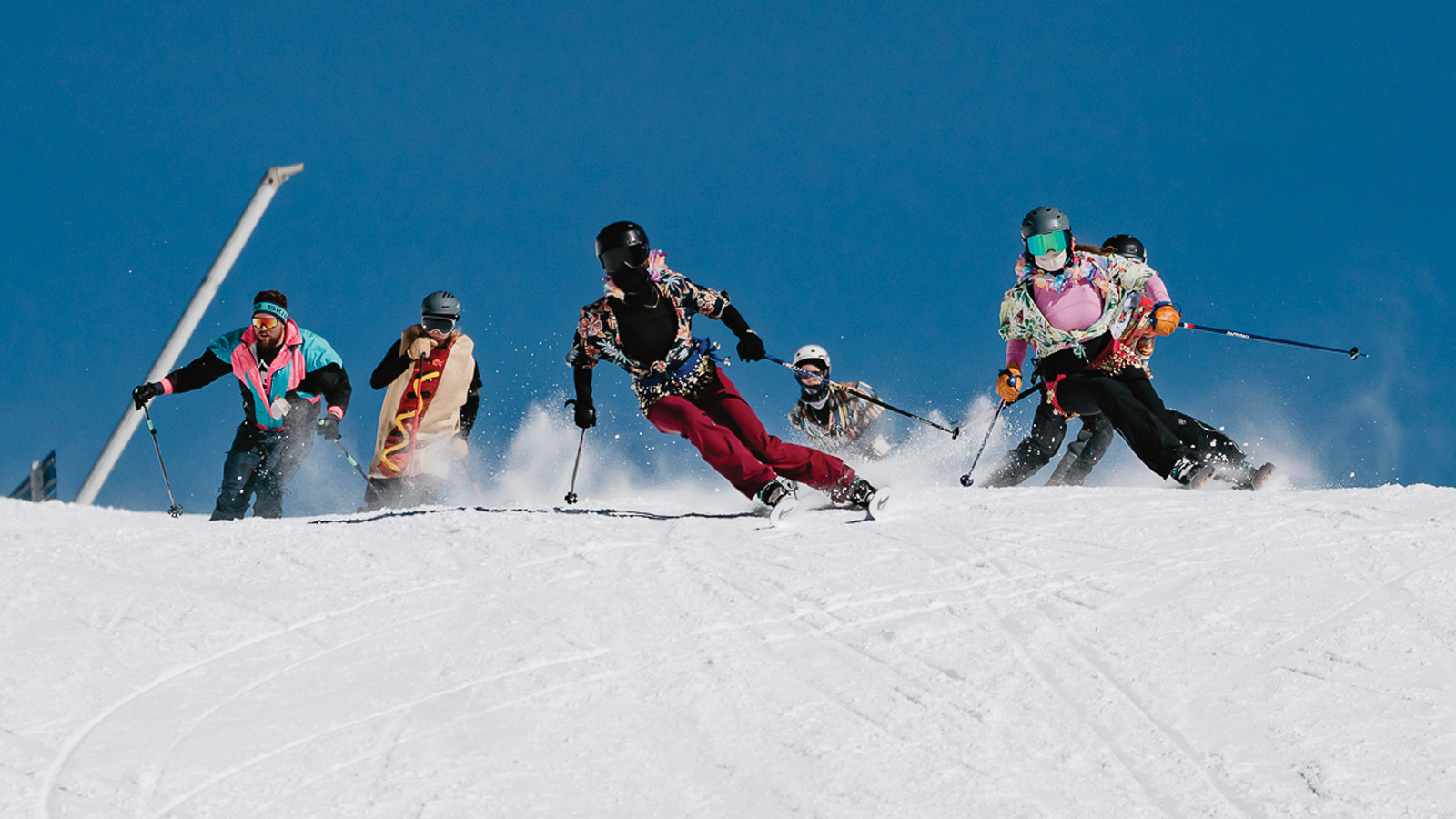 Can I Have This Dance? A first-timer experiences FREESKIER Fest in all its glory

As far as breaking the seal on a new experience goes, it could have gone better. Clicking into my skis on the first morning of my first-ever FREESKIER Fest, I began to sweat a little. You know, that kind of sweat that beads up into a single drop on your forehead, that leaves your hands a little shaky, nerves a little on edge. I had felt this anxiety before—long ago, at my high school homecoming dance.

The flashback was vivid: I couldn’t stop sweating, I kept fidgeting with my tie and sport coat. I had no idea what to do with the damn corsage. The dance started with me walking into my date’s home, then walking my head into a chandelier as I awkwardly held that arrangement of flowers like it was a bag of stinky dog crap. And then I just stood there, with my head in the chandelier and my arms out in front of me. I didn’t know what to do with myself. FREESKIER Fest wasn’t exactly the same, but it wasn’t all that different either.

Receiving an invite to FREESKIER Fest, known by all skiers as the premiere and most comprehensive ski test for the past 19 years, gave me a similar butterfly rush of excitement and nerves. But I wasn’t worried about my cowlick, the loose fit of my dad’s hand-me-down dress clothes or the fact I’d never slow danced before. What had my heart racing this time was feeling like I was the newbiest of newbs among a wild, talented and seasoned group of hardcore skiers. Can I keep up? Do I remember how to ski? Will there be snacks? Do I even remember how to talk to people? I had a lot on my mind.

While the latest FREESKIER Fest was wildly different than any in the past, we’d already spent a year adapting to new pandemic norms. During the four day event we avoided the usual rowdy, après-ski parties and all-night hot tubbing; had to wear masks and keep our distance; and, before any tester could even think about their retro neon ski outfits, they had to first test negative for Covid-19. With all these adaptations, however, our focus was clearer than ever as we collectively tested, rated and reviewed more than 300 pairs of skis. We skied bell-to-bell and talked gear on every chairlift ride. But the process wasn’t just a bunch of banter on the gondola. We used FREESKIER’s extensive, hard-data ranking application—specifically developed for the Fest—and real-time commentary to review each and every ski on the hill. And every ski was pushed to the limits by hard-driving skier legs that’d make the drive chain on a dually truck shudder.

This year’s Fest was supported by The Ski Monster, an online gear supplier you can’t help but love for its ski bum roots—started by two ski pals in a college apartment—and held at Ajax Mountain in Aspen, Colorado, for the third consecutive year. I’ve lived just outside of Aspen since 2016 and Ajax is my go-to hill for crushing vert faster than you can say “salmon of Capistrano” because it holds everything you want in a hard-charging ski day on 675 acres with 3,267 vertical feet filled with bumps, side hits, flawless corduroy and a perfectly sustained top-to-bottom pitch. While I was more than comfortable with the terrain, the anxious teenager flashback came from my realization that, within FREESKIER’s group of ski testers, I was just the OK-est skier on the mountain.

Now, I have been a fully-fledged ski bum for the better part of two decades. I’ve worked the quintessential ski town jobs like snow-making and ski patrol and fancy lady underwear salesman in a fancy lady underwear boutique. I’ve skied hairball lines on mountains that looked like the spine of a stegosaurus. I’ve undulated in powder so deep it’s made my mustache spin with excitement like a novelty bow tie. Once, I skied with a chainsaw. All this is to say that I am very confident in my ski bummery, two-planked shimmying skills and robust knowledge of ski gear. But any confident skier would be reverted to a knee-shaking teenager before Homecoming ’98 when rolling with this collective of testers—skiing’s version of the Dream Team, consisting of industry legends, former racers, silverback park rats, big-mountain jocks, local shredders and beer-league heroes. I think TJ Burke even made an appearance.

A member of the skiing gen pop observed our crew in the lift line: “Those FREESKIER folks are the best damn skiers out here, man.” I scanned the group of testers queued alongside me. I saw skintight denim overalls, a hot dog costume, teased hair, ‘80s fringed leather, Day-Glo shades, and more goofy, fun-loving ski apparel than there are spread eagles in Ski Patrol The Movie. I looked down at the hot pink Hawaiian shirt I was wearing, realized it matched my hot pink blade shades, hot pink hat and Tom Selleck-adorned neck tube, and my nerves were—finally—put at ease. I’m just as weird as the rest of these weirdos, I thought as I remembered skiing’s greatest idiom: If you’re not falling, you’re not trying. And if you’re not smiling, you’re trying too hard.

I cracked a grin because I was merely the newest member of the skiing menagerie that is the FREESKIER Fest ski testers, none of whom I had to hand a corsage. I now had the unique opportunity to party ski within the oooh-n-aaahh jubilee of that weirdness and with those rippers. What a gift.

Like giggles and wiggles with Michelle, another tester I’ve known since our ski bum twenties in Telluride. And hot laps with Allie, who can ski switch faster and with prettier arcs than most skiers can riding forward. And watching Ian send it to the moon off of every lip and side hit. I’m not sure what’s more impressive, his skiing or his mullet… or how his mullet unfurls in the wind like the handlebar streamers on a six-year-old’s bicycle. Then there were local rippers Mo and Keaton dragging their hips across crisp corduroy in physics-defying turns. And Anna’s leopard-print leotard. And John’s tomato-red, sunburnt quads. At the top of the Ajax Express, Thomas and I put in a side-step traverse for two and a half extremely dumb and highly hilarious low angle miniature wiggles in sun-cooked pow—I think we called it “getting the shot.” There was the constant thumping of dance music at the corral overfilled with next year’s kickass skis, the smile-inducing, drool-worthy sight of a lunch that consisted of 40 boxes of pizza and the unparalleled joy of ending each day with the greatest, 20-person party shreds in the history of skiing. There’s just nothing quite like a Ski Test party lap.

It turns out, if you’re the OK-est skier among a troop of mulleted, spandex-clad, perma-goggle-tan-having shredders who can carve, schmear, send and wiggle better than most folks can spell the word “cat” after they’re given the letters “c” and “t” as a clue, well, then you’re doing pretty dang good. At the very least, you don’t have to say, “You should put this somewhere,” as you awkwardly hand your date a goddamn corsage.