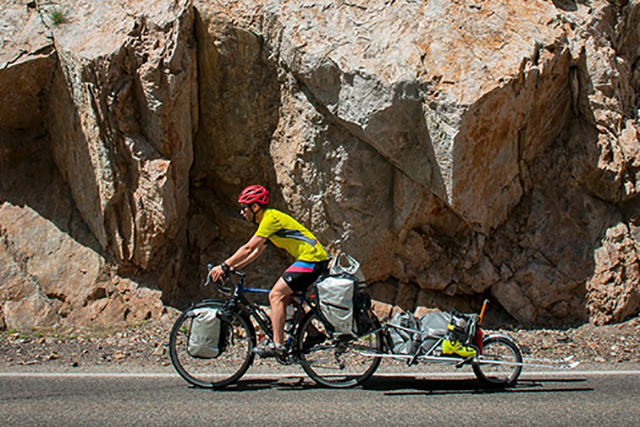 Brody Leven is no amateur when it comes to extremely badass adventures. From Patagonia, Denali, Romania and beyond, Leven has traveled the world extensively with his skis and a backpack. However, the twenty-six-year-old from midwestern America continues to find new voyages. A few weeks ago, Leven set out on a two-week biking, hiking and shredding adventure deemed “Pedal to Peaks” with his good friend and fellow adventurer Abe Greenspan. The trip is now in the books and ranks among his most challenging feats. We recently caught up with Leven to discuss the details of his epic journey.

I’ve seen some photos of you on Instagram, recently. You been skipping out on leg day at the gym?

My friend Cory and I have always called them “knee muscles.” I don’t know what they are or what’s wrong with me.

Psych—[kidding]. Congrats on finishing #PedaltoPeaks, man. How’s it feel to be home in Utah?

Oh man. Thank you. A congratulations actually feels really good, because, in my mind, it feels as though I’ve earned it. We accomplished what we set out to do, and it was tough. That trip was hard. But, like most of my trips, I’ve already largely forgotten how difficult it really was, which is either a blessing or a curse. It’s time to start planning something else incredibly unlikely and painful. 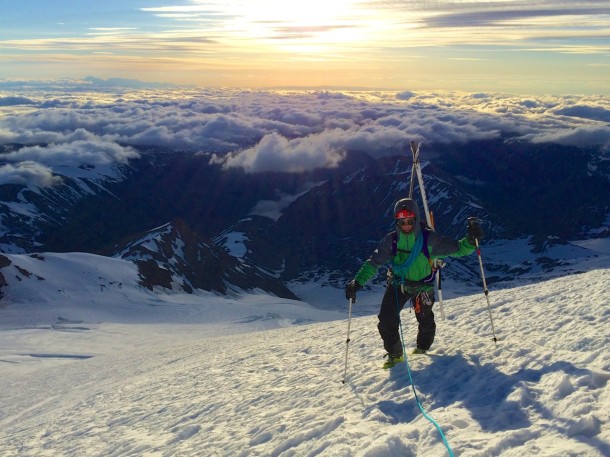 What are the first three words that come to mind in regards to the trip?

[Laughs] How many miles were covered? How many days did the trip take you?

According to my Suunto Ambit2 GPS watch, which is how I tracked the entire trip:
481.3 miles biked, hiked, skinned, and skied. 51,820 vertical feet gained. 52,300 vertical feet lost. Thirteen days human-powered. sixteen days total, including train travel. We had given ourselves a month, but, due to the weather, we finished much faster. With our four clear days, we had to make sure that we were on the mountains, climbing and skiing—not biking. Because we can bike in a rainstorm (we are waterproof); we can’t climb Mount Rainier in a whiteout (we are human).

I know that you had some speed-wobble issues with your ski trailer. Any other sketchy road experiences?

Hang on. You’re ignoring how awesome that trailer setup was. I took a $50 bike trailer that I found on Craigslist and outfitted it—using only ski gear that I needed for the trip—to be the ultimate Pedal To Peaks machine. Well, actually, it was far from a machine. It was the opposite of a machine; more like tying a few sand bags to your rear axle and trying to pedal up mountain passes the day after climbing and skiing 7000 feet while dragging them. More like I wish it was a machine. Anyway, I also rode my 200-pound bike setup into a 6-foot-deep ditch on a forest service road between Mt. St. Helens and Mt. Adams. I was riding next to Abe, in the middle of the lane, when a car came up behind us, the same way cars had been doing for the previous week. I overcorrected as I tried to fall in line behind him, sent it straight into the ditch, and, out of all of the crystal-clear beautiful water in Washington, I managed to find myself and my gear in six inches of swamp water. Somehow, my overloaded bike frame didn’t break. The car stopped to make sure I was okay, but I was so embarrassed that I just laughed and waved them on their way. Only after that did I realize that if my frame had actually broken, I probably would have needed a ride to the nearest town, and that was the only car we’d seen in five hours. 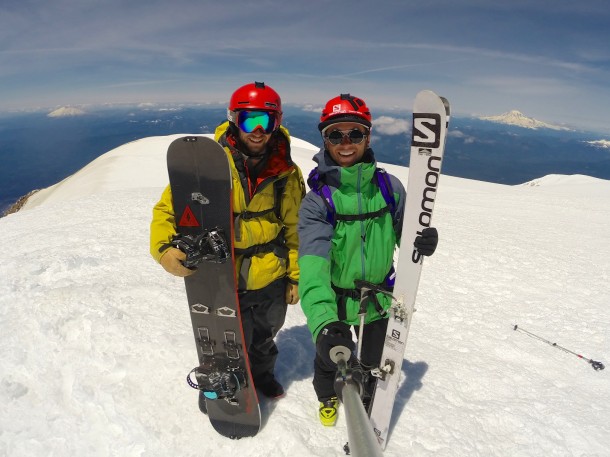 How many peaks did you tackle on the journey?

The plan was to try and get up Adams, St. Helens, and Rainier. It was hard to pass up on Mt. Hood, since it’s so close to where we started in Portland, but I skied that as part of my last volcano road trip with Adam Clark a couple of years ago, along with Jefferson and Shasta. On that trip, we started on Hood and headed south. This time, Abe and I headed north. The weather conditions for climbing lined up just right, and we managed to stand on top of all three volcanoes. Twelve days into the trip, as I rode away from Rainier and into Seattle (including a 13,435-consecutive-foot descent by ski, foot, and bike), I just wanted more. I wanted to bike more, climb more, and ski more.

In your opinion, what was the most challenging aspect?

We pretty much didn’t talk to a single girl for two weeks. Do you have any idea what that’s like?

Me? Definitely not. What was your greatest highlight from the trip?

Somewhere near the end of the trip, the big picture hit me. I realized that we hadn’t just climbed and skied these volcanoes like thousands of people before us. We had ridden our bicycles. And while that’s obvious, only after having done it did I realize the scope of the goal and accomplishment. We did it without placing undo harm on the environment. Instead, we placed it on our quadriceps. 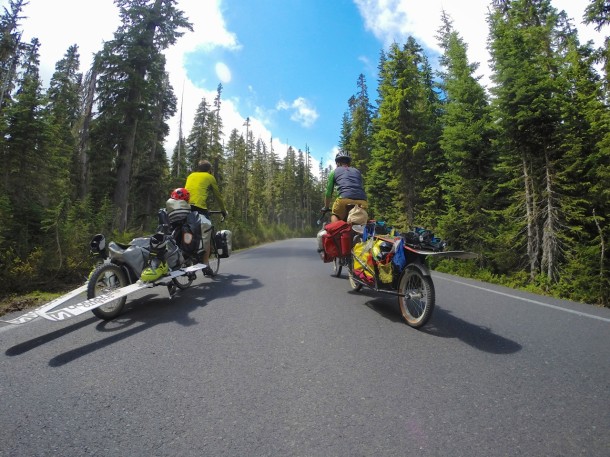 Brody and Abe pedaling to peaks.

You had a fair amount of wet weather on the journey. Was it difficult to keep your equipment dry?

I’ve done a fair amount of bike touring at this point, and rain seems to be one of the major themes of my trips. When I rode my bicycle across the country on a whim after graduating college, it rained, snowed, or sleeted for more than 20 of the first 30 days. I just can’t seem to stay away from rain on my touring bike. So when it started raining on our trip, I thought I was prepared. What I didn’t realize was that in the couple of years since I’d last used my panniers, they’d apparently become completely anti-waterproof. After all of my bags, including my trailer bag, soaked through during our first monsoon of a rainstorm, I spent hours in front of a dryer trying to get everything a little less soaked. My glacier rope, skins, and other ski gear never seemed to dry after that first rainstorm. I lined all of my panniers with garbage bags, and, as always, did everything in my power to keep the three most important things dry: my Salomon Super Halo down jacket, my Mountain Equipment Helium 400 sleeping bag, and Black Diamond Mirage tent. That’s the stuff that’ll keep you alive. Everything else was soaked for much of the trip. But I’m always really paranoid about trying to keep gear clean and dry, and this trip was no exception. Oh, and I put plastic bags over my ski boots because my mom suggested it. That was the best idea of the trip.

How was the shredding? Did you guys get some good lines?

How rewarding are your turns when you work so hard to earn them?

I guess that’s kind of the question of my entire life in the mountains. Yes, we work hard. But in my mind, the hard work isn’t for the turns. The hard work is for the sense of achievement I get when I’m standing on a summit. The skiing is just my (heavily) preferred method for descent. I like climbing up as much as I like skiing down. I’m too tired to think “this turn took 15 minutes of climbing to earn.” On Rainier, we climbed for over 12 hours for about 40 minutes of skiing. 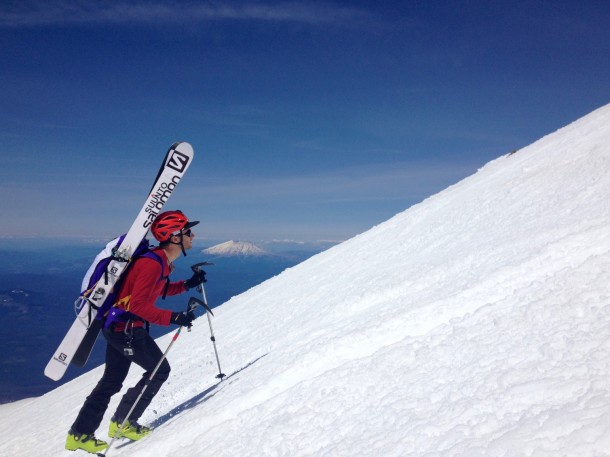 How did you come up with an adventure like this? What motivates you to constantly find a new journey?

I’d dreamed of linking some American volcanoes by bicycle. But it took a phone call from my dear old friend Abe Greenspan to actually pack my gear and jump on a train to Portland the next day.

Any plans for another trip like this in the future?

No, there are no plans. But there are dreams. While Pedal To Peaks was extraordinarily difficult, I wouldn’t hesitate to do it again. It was the exact kind of challenge that I love, and the multi-sport aspect made it that much more appealing to me. While there are no plans, when I looked out from the summit of Rainier, I definitely saw some volcanoes that I haven’t climbed and skied. I have to think of a hashtag before I can commit to anything, though.

You going to ditch the car and the ski pass and just bike and hike from now on?

No. I’m buying a Hummer and a helicopter. 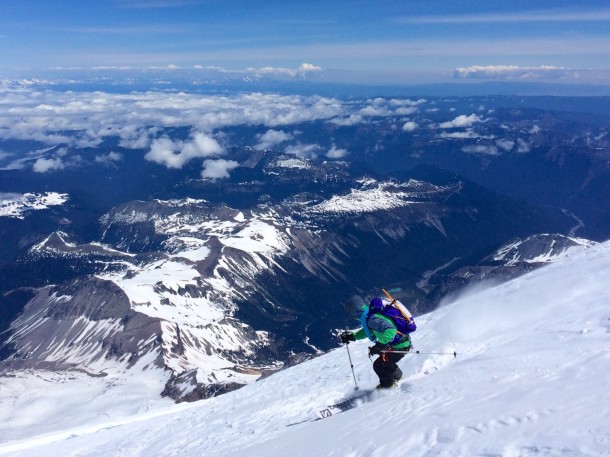 Did you guys eat well along the way?

We ate a gazillion calories, and I consider that a good thing. All we wanted was more. Every time I tweeted about an IV of calories, I wasn’t kidding. Like my past bike tours, I just couldn’t seem to get enough food. Abe and his girlfriend, Hazel Birnbaum made dehydrated veggies, delicious homemade granola, and even made energy bars at home. I’m not much of an eater, and Abe was often cooking a great dinner as soon as the tent was up. We actually ate really well. Lots of cinnamon rolls.

As for the sleeping arrangements, want to touch on that?

Abe and I slept together in a small tent for 2 weeks. We were always in our sleeping bags before it was dark; the only time I turned my headlamp on was for pre-dawn climbs. We sleep head-to-head, not head-to-foot.

No. Our shared bike touring experience, Abe’s bike mechanic experience, our combined experience in the mountains, and my proclivity for spreadsheets kept us to the bare minimum. We didn’t have anything we didn’t need, and probably didn’t have a few things that we did need. But a few cold nights and wet gloves are easily forgotten. 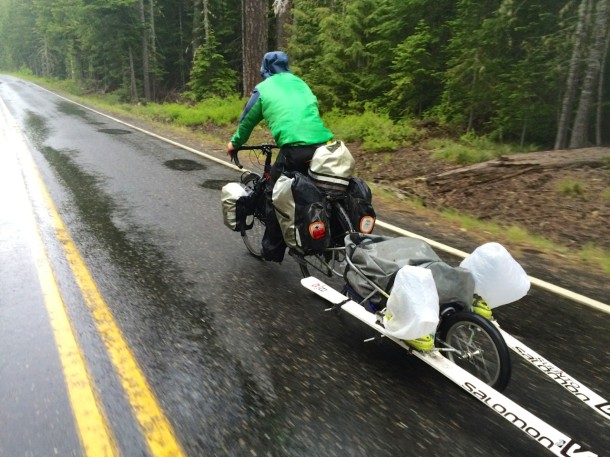 On a nice long run this evening, I realized–for the first time—that, as it sits right now, I have consecutive trips that start in a week and take me until winter. I wish I hadn’t bought that bed for the basement bedroom I rent in Salt Lake. That $180 (it’s a kid’s bed) could have been used for excess baggage fees or something.

Any advice for other fellow adventure seekers like yourself?

The things that satisfy me the most–mentally and physically–always make me really tired and sore. When I first got Abe’s call, I thought we couldn’t do it. Then I was like, “well, I guess I better go try now.” And then we did it.

Related: Brody Leven on Denali, first descents in Romania and building a brand