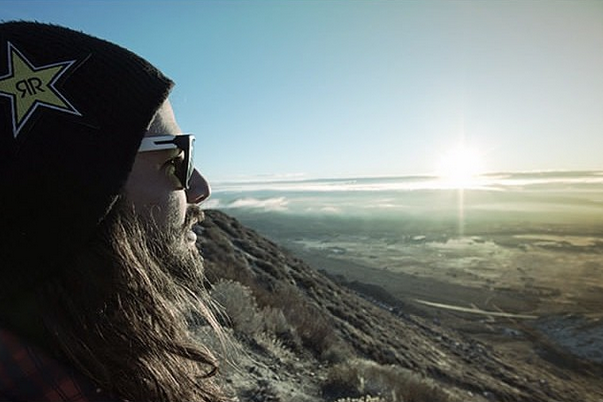 In late December, we asked our fans to submit their best questions to Big Picture star Chris Logan. After collecting nine intriguing questions from you, the FREESKIER audience, we sent ’em off to “the Dahrkness,” who had this to say:

Anthony Savino: What was it like for you growing up skiing? Any tips for a kid that is trying to become better in the park?

Growing up skiing at Mount Snow was the sickest. I rode with such a big and awesome group of homies and had the best coaches a guy could have. All of which pushed me real hard and are a huge reason why I am where I am today. That and having such amazing parents that gave up so much time and money to make it all happen for me… I couldn’t have done it without them. Big thanks to all of them. Just keep riding as much as possible and keep pushing your limits. Over time things will start to click and you’ll get better.

Skate Montana: At what blood alcohol level does “The Dahrkness” come out?

Haha! “Dahrkwing McFuck” is usually out, it doesn’t take much. It’s right around “brown zone thirty” when “Killa” comes out. Haven’t seen that dude in a minute though, let’s try to keep it that way.

Kavu Ford Pitts: Chris, how did Rossignol find you, and after they did, did your skiing change, once the sponsors came in?

I was maybe 14 or 15. A good buddy of mine’s dad did some reppin’ for them on the East Coast. They were looking to hook up some up-and-comers, so Nick Miles, Parker White and myself became the “Rossi Posse.” We started out maybe getting a discount on skis and gear. Then that grew into getting some free gear. Then it kind of just grew from that into where I am today with them, over a decade later. I think that the opportunity just made me really motivated to get better. They always had such an ill pro team that I wanted to eventually work my way up to be at the top of the team like those dudes.

Dave Widenor: Chris, Is it possible to make a peanut butter and jelly sandwich without using bread?

Adam Guare: How have you matured as a skier, or how has your outlook on skiing changed throughout the years, if it has?

Mature is a word that usually doesn’t go in the same sentence as my name. I grew up skiing on the East Coast. I started out skiing moguls, upright aerials (twister-twister-spread), and even acroski (ballet) for a year or two. That slowly transformed into park and pipe skiing when that era started for skiers. There wasn’t really much pow skiing or big-mountain terrain in the East, so when I moved out to Mammoth Mountain after high school that was my first taste of that. It was so new to me and something that I wasn’t good at whatsoever, but it was real fun. I just wanted to get better at that and take everything that I had learned from riding park in the East, and try to apply that to the big mountains. Now, I’m just constantly trying to better my skiing and keep learning all I can about the backcountry. You can never know enough. So in that way, my skiing has transformed.

Sam Kay: Chris, where are there good alpine touring locations in Summit County?

Ian Compton: Have you ever fallen on a dirt bike?

If nobody sees it, it never happened.

Steve Wallace: Christopher, how many helicopters can you do off one ramp?

Less is more. One or two times though, I did four.

Ashley Gregg: How many braids can you fit in your hair?

I’d imagine quite a lot.

Up next in FREESKIER’s Ask a Pro series, Mike Hornbeck. Submit your questions for “Horns” here.