By now, the young teenage phenom that is Kai Jones has become a well known name in the world of skiing. A product of hard work, passion, determination and growing up around some of the best skiers on the planet, Kai has grown into incredible abilities on the sticks. Watching him cruise around his home mountain of Jackson Hole, it is hard to imagine a better area for the young dawg to grow up; he’s able to stack up with those far beyond his age and send cliffs and tricks that those more experienced than him would be intimidated by. Some would try to tell you that young Kai is just in the Teton Gravity Research flicks because his father owns the cameras, but anybody who has watched this clip or his previous segments knows otherwise. Kai can flat out rip, no discussion needed.

As can be seen in this clip, Kai, like any other professional skier, works his ass off to perform how he does. After watching this very segment in TGR’s 2020 film, “Make Believe,” at a drive-in theater outside Bozeman, I almost forgot that he’s only 14-years-old—and was 13 at the time this was filmed. I have seven years on the dude and crumple at the thought of sending some of the cliffs in this segment. A warning to anyone who clicks play: It is best to let go of your ego now, because it will possibly be shattered after watching this video. One thing that is certain, the future of skiing is in great hands. 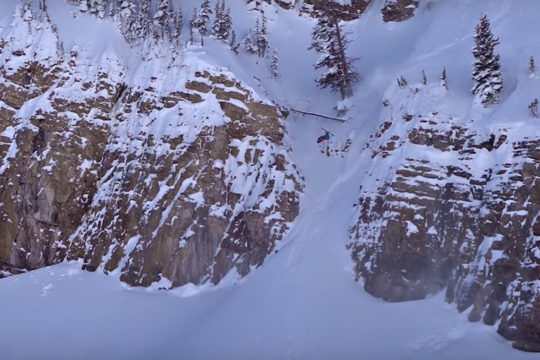