Jackson Hole’s rowdiest ski competition, Kings and Queens of Corbet’s, is set to take place this week and the FREESKIER crew will be on-site to cover the madness as it unfolds. The second running of the peer-judged competition will see 25 of the best skiers and riders throw their meat into the famed Corbet’s Couloir for a shot at ultimate bragging rights—and a hefty cash purse. The weather window is officially open, which means the contest can happen any day this week.

Once the competition is said-and-done, we’ll be ushering in some hip hop royalty to town for the Official Awards Party on Saturday, February 16, at the Pink Garter Theatre. If you’re around, join us for a night you won’t soon forget as we crown the official 2019 King and Queen of Corbet’s and party the night away with music by legendary rap group The Pharcyde. Get your tickets here.

To keep you satiated until the competition begins this week, keep scrolling for highlights from last year’s inaugural Kings and Queens of Corbet’s event.

Kings and Queens of Corbet’s exceeded all expectations! Thank you to all the athletes, sponsors, and crews for making this event happen. #jhdreaming #jacksonhole #jhkingsandqueens

One of the Queens 👸 @munz_bunz sends Corbet’s like a 🚀 ship. Athlete judging is this Saturday and the King and Queen will be crowned @the.mangy.moose Saturday night with @freeskiermagazine. @gopro #jacksonhole #jhkingsandqueens

Sometimes you get too excited and punch it too deep! Definitely hit my head 🙃🤯but had to keep ‘er moving! My first run was a very loose dub backslap to right 3 backslap. Toned ‘er down second run for a left 3 off the top to right 3 then a rock ride. Insane day yesterday for the @jacksonhole Kings and Queens of Corbets. The boys all threw down. @dahrkgram with the savage 7, @blzablaine with the butter 7 and @crazy_karl with the 7 stomp! #helmetsarecool Big thanks to @jmcmillan and her husband @ericseymour for such an awesome event!!! 🙏🏻🙏🏻🙏🏻🙏🏻 Shots by @tetongravity @adambagelboy (sick tunes Adam!) and myself @uaoutdoor @j_skis @scottfreeski #UAOutdoors #jfriendski #scottathlete 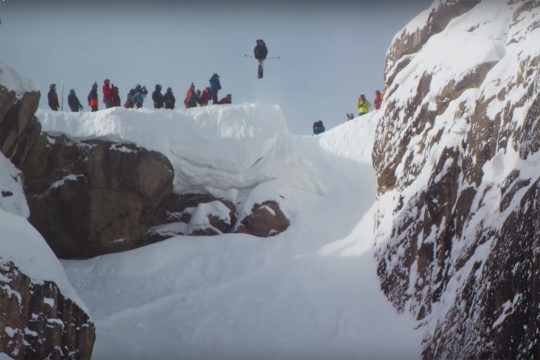