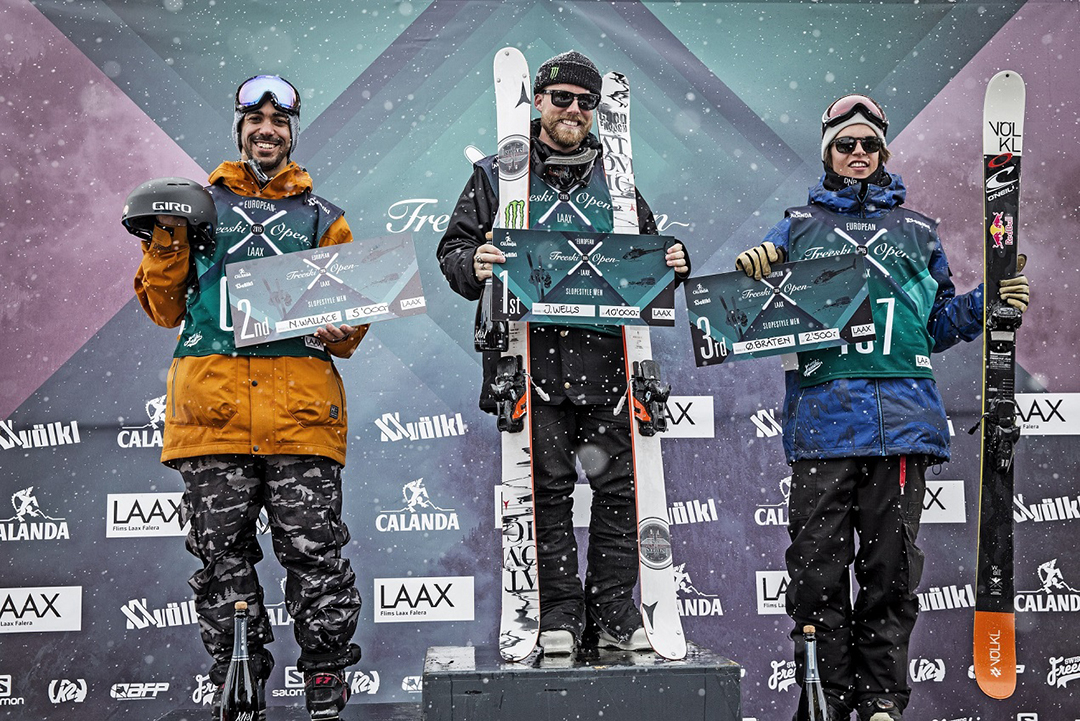 The 2015 European Freeski Open went down this past weekend at Laax, Switzerland. The slopestyle competition was packed with action from 130 competitors, but at the end of the day only one male and one female would claim victory.

On the men’s side, it was the eldest of the four Wells brothers, Jossi atop the podium. Wells lit up the course, showcasing his signature smooth style and technicality, posting a score of 85.16 on his third and final run. Noah Wallace chased closely on the heels of Wells, putting four double corks to his feet, earning the second place position and his best finish of the season. Rounding out the podium was Norwegian Øystein Bråten, who has proven all season long that he has what it takes to earn some hardware.

On the ladies side it was Norwegian Tiril Sjåstad Christiansen who claimed the victory with a score of 87.16. Hot off of her win at the World Cup Silvaplana, Switzerland, Christiansen continued her dominance in the slopestyle scene. Second place belonged to Johanne Killi of Norway, who won last year’s event. In the third position was Isabel Atkins of the United Kingdom.

Congratulations to all of the athletes for putting on a great show in Switzerland. Until next year, Euro Open.

Tiril Sjåstad Christiansen and Jossi Wells are the winners of the 8th European Freeski Open LAAX taking home the prestigious slopestyle titles, lots of AFP world ranking points and 5.000 CHF/10.000 CHF prize money. And they will return to LAAX.

130 participants of this year’s competition were impressed by this year’s slopestyle course, which was built by the Snowpark LAAX crew up on Crap Sogn Gion mountain: an unique design in the contest circuit, packed with surprises and a perfect playground for new trick combinations. The set-up started with two jibb features offering the riders various possibilities for moves on rails, bonk and tube. This section was followed by the highlight of the 2015 edition, a four jump kicker-line.

After two solid runs Jossi Wells opened the third and final heat, and he set a mark high. The New Zealand native started with a right 270 on front 270 out, into a switch left 270 back 270 out in the rail section, followed by a right 900 leading tail grab, switch left double cork 900 safety, left double cork 1260 mute and switch right double cork 1080 safety over the four jumps.

The women’s field proved to be a battle for victory between the strong Norwegian girls Tiril Sjåstad Christiansen and Johanne Killi, EFO champion 2014. Finally it was Christiansen winning her first EFO title. She set the high score of 87.16 points on her second run with a front 450 off, followed by a front 270 off, starting the kickers with a switch left 540 safety to a right 720 leading tail and a left 540 mute ending with a switch right 720 leading tail. Second place got to Johanne (86.50), Isabel Atkins (UK, 79.16) too third.