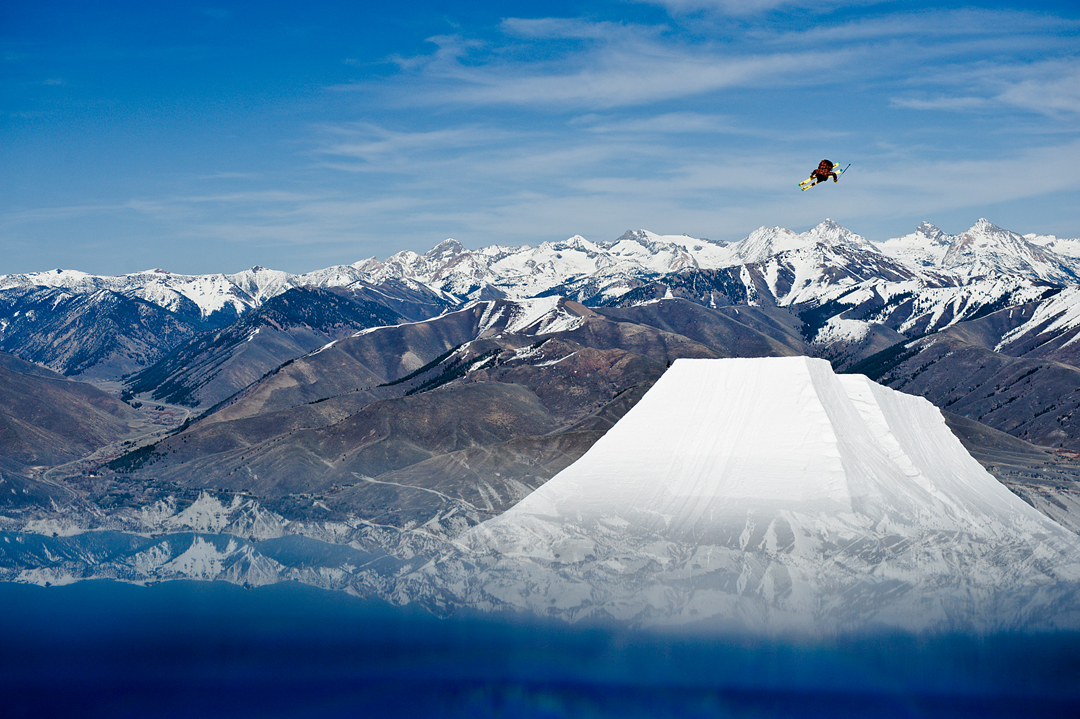 Collin Collins was born and raised in Ketchum, Idaho, the mountain town that flanks the resort of Sun Valley. He learned to ski at age two at Dollar Mountain, the smaller of the two ski hills, nestled amongst downtown. He became a ski racer, then eventually discovered powder skiing and quit racing for the more relaxed world of freeskiing.

After high school, Collins moved away, as kids tend to do—first to Bozeman, Montana, for college, then to Salt Lake City, Utah, to pursue a career in skiing, where he began filming with the 4bi9 Media crew.

But by 2012, after four years of living in Utah, Collins felt the pull of Sun Valley drawing him back. He moved home and now, he spends his time snowmobiling and touring into the Galena Pass backcountry and riding the world-class park that’s risen on the very slopes where he first learned to ski.

“I grew up in this amazing, small mountain town, and I just wanted to return to that lifestyle,” Collins says. “So I moved back and I’ve never thought about relocating again.”

In the summers, he works construction for his dad and mountain bikes constantly. In the winters, he travels some for filming but mainly, he likes to stay put. “I don’t know why there isn’t much of a scene here,” Collins says about Sun Valley’s low-key, untapped vibe. “I think people here are just real skiers, passionate skiers and mountain people, and no one is trying to prove anything. Everyone here, even the pro skiers, just do their own thing.”

It’s no wonder the place is a magnet for pro skiers. Storms whip off the Sawtooths, dropping an average of 220 inches a year, but the sun somehow manages to shine over 80 percent of the time. It’s either dumping snow or brilliantly blue. Bald Mountain, the bigger of Sun Valley’s two hills, boasts a vertical drop of a whopping 3,400 feet and a peak elevation of 9,150 feet. At Baldy, you’ll find untracked powder days after a storm in Mayday Bowl and you can rip high-speed, endless cruisers down Warm Springs.

At Dollar Mountain, Snow Park Technologies has constructed a first-class park, with 76 rails and a 22-foot pipe. With no crowds, it takes less than five minutes to spin a lap through Sun Valley’s park. Level 1 Productions has shot segments of three of their feature films in Sun Valley’s parks, including Eye Trip, After Dark and Sunny.

Thanks to Sun Valley’s 18 mainly high-speed lifts, the place could transport over 29,000 skiers per hour, but the resort only sees an average of 2,900 skiers a day; lift lines do not exist here.

“A multitude of mountains,” says pro skier Karl Fostvedt, who was born and raised in Sun Valley, “and a fraction of the people.”

Sun Valley got its start as a mining town and railroad hub. It took a guy named Count Felix Schaffgosch to envision the place as something more. Schaffgosch was hired by Averell Harriman, then the chairman of Union Pacific Railroad, to search the Rocky Mountains for the perfect place to build a destination ski resort, America’s equivalent to St. Anton or Zermatt, as a way to boost rail travel to the West.

Schaffgosch arrived in Ketchum and shortly after sent a note to Harriman about the town he’d discovered. “Among the many attractive spots I have visited, this combines the more delightful features of any place I have seen in the United States, Switzerland, or Austria for a winter ski resort,” he wrote.

A public relations expert in New York City coined the name Sun Valley, since the place was known for its constant sunshine. A lodge and ski runs were built and the resort opened in 1936. The first lift ticket cost 25 cents.

A Union Pacific engineer named Jim Curran designed the country’s first chairlift at Sun Valley, a single seater modeled after banana-loading cargo lifts from Panama. Instead of a banana hook, Curren added a seat, and suddenly, the chairlift was born. The place has been a hotbed of innovation ever since. Ed Scott built the first aluminum ski pole in Sun Valley and launched his company, Scott Sports, in 1958. Smith Optics, and its first double-pane, fog-free ski goggle, was founded by an orthodontist named Bob Smith in Sun Valley in 1965. Ernest Hemingway finished writing For Whom the Bell Tolls in the Sun Valley Lodge. Warren Miller got his start as a ski-mover maker by camping in a trailer in the Baldy parking lot and Dick Barrymore first captured freestyle skiing on film on the slopes of Sun Valley.

Sun Valley has sent nearly 60 hometown athletes to the Olympics, from ski racers Dick Durrance and Picabo Street to 2014 snowboard halfpipe gold medalist Kaitlyn Farrington. Win a medal at the Olympics and you’ll get a run named after you on Baldy.

“The craziest thing about Sun Valley is that even the recreational skiers—just everyday, average skiers—are 10 times better than skiers elsewhere,” says pro skier Banks Gilberti, 26, who grew up in Sun Valley and moved back in 2014. “How is everyone from here so good? It’s because we grew up skiing this consistently steep mountain. This is the mountain that raised us and turned us into skiers. That’s the only way I can explain it.”

Gilberti moved to Sun Valley when he was four years old, but then he and his family relocated to the East Coast when he was in high school. Sun Valley was always in the back of his mind, but he wasn’t sure how, or if, he could ever get back there. Gilberti went on to compete in slopestyle and halfpipe at the X Games and Dew Tour and things were going well for him, but something just didn’t feel whole.

“I hadn’t been back to Sun Valley in years, but I happened to be driving through on closing day of the season,” he remembers. “I met up with all my friends and had one of the best days ever. It was amazing spring conditions, the sun was shining, everyone was having a blast. I hadn’t felt that way in a long time. That was the day I knew I was coming back.”

Sure, Gilberti moved back for the skiing—steep, sustained runs on Baldy, a film-worthy park and endless, untouched backcountry terrain—but it was also the community that lured him in.

“My favorite thing about this place is that everywhere I go—restaurants, gas stations, the mountain—everyone knows my name,” says Gilberti. “And it’s not because I’m a professional skier. It’s because you see these people every day, it’s because Sun Valley is that kind of a tight-knit community.”

Sun Valley attracts the rich and famous—you’ll run into John Kerry at the fly-fishing shop, Miley Cyrus bolting out of Java, the local coffee shop and Clint Eastwood shopping for groceries—but it’s also a mountain town where real, honest people live. At the end of a powder day, you’ll find locals congregating at Apple’s Bar for tater tots and tall Tecates. If you look hard, you can find a decent place to live for $300 a month.

“It’s mostly just true mountain folk that come to Sun Valley—along with the occasional billionaire with a private jet,” says 26-year-old Lexi Dupont, who grew up in Sun Valley and after college, moved from Crested Butte to Jackson Hole to Revelstoke in search of a ski town that compares to her hometown. None of them did, so she moved back to Sun Valley last year and bought a tiny ’70s dome on two acres near the base of the ski hill.

Sun Valley is a place entrenched in ski culture and history—a skier’s town, through and through—but it also has a surprising dose of worldly culture from the art, music, and food scenes, too.

The Dalai Lama visits here, a Zio Ziegler gallery opened on New Year’s Eve and transgender actress Laverne Cox gives talks at the Center for the Arts. Award-winning bands from Seattle play public shows in packed garages and you can eat Vietnamese caramel pork ribs and Balinese cucumbers around a bonfire at Rickshaw, the Asian tapas restaurant in town.

“The close-knit community is definitely the coolest part about Sun Valley. Everyone is so supportive and will go out of their way to help you succeed,” Dupont says. “My friends are all starting to move back home. They went out into the world, explored and looked around and missed home some much they had no other choice but to move back to our little paradise.”

Related: Destination: The revival of a true original for Sun Valley, Idaho