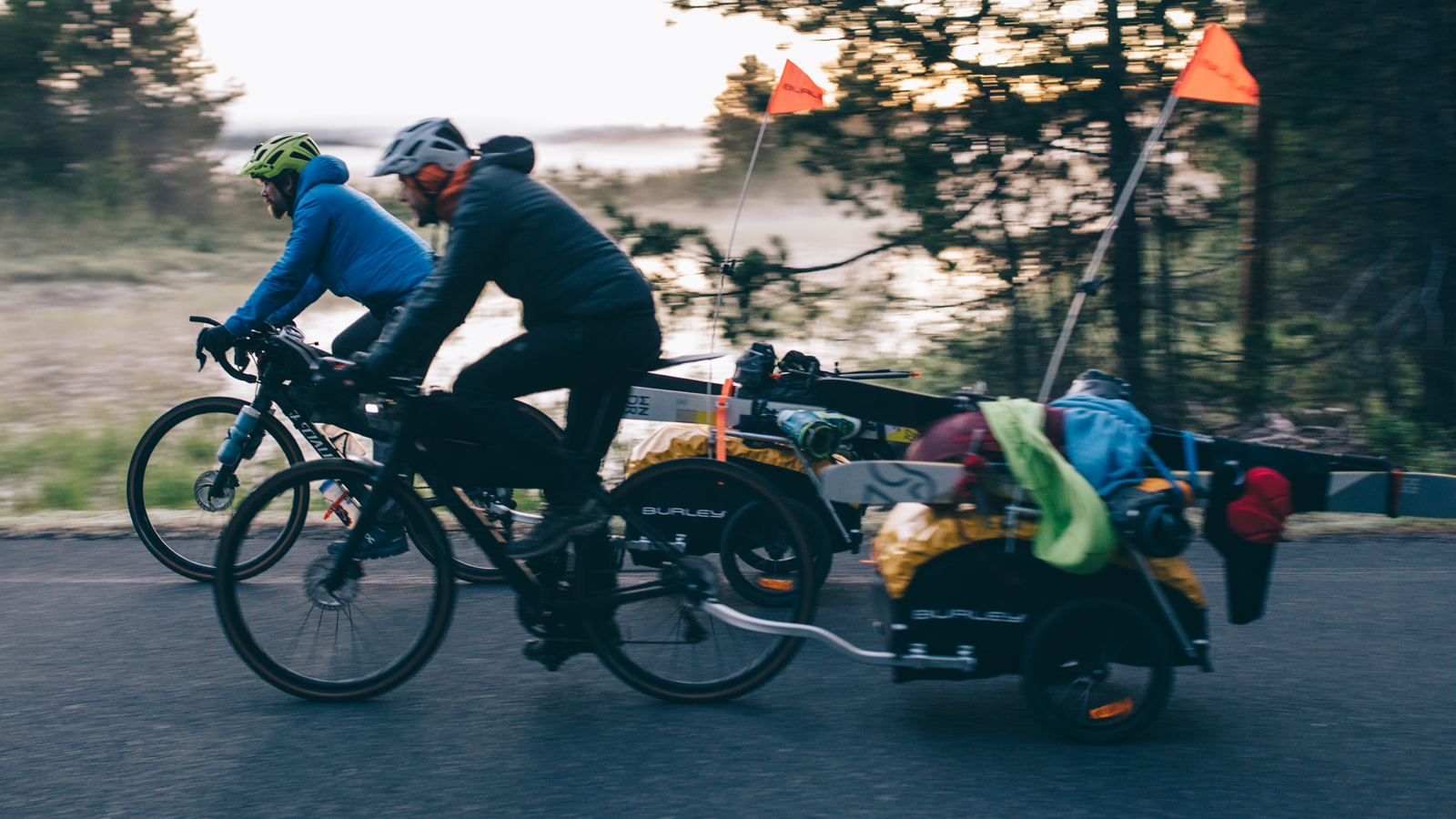 Amidst the pandemic, a human-powered adventure across the Pacific Northwest

The McDonald’s in Sisters, Oregon, sits on the corner of Railway Road and Highway 20, on the north side of town. A tan brick building with its namesake yellow arches camouflaged by nearby buildings, the joint looks and feels like a local restaurant that just happens to serve Big Macs.

As we biked with our skis strapped to our packs on a sunny, 80-degree Monday afternoon, tourists flocked the sidewalk, despite the global pandemic and looming recession. Pedaling our way towards Mount Jefferson—50 miles north—we fought the urge to hook a left, bike the drive thru and play catch up on our growing caloric deficit.

The three of us, Wyatt Roscoe, Charlie Hagen and I, were on our twelfth day of a self-supported project to ski as many PNW volcanoes as we could, using bikes to connect them. Starting at Lassen Volcanic National Park, in the southern part of the state, we planned to link together Oregon’s biggest lumps of lava until our legs turned to jello.

Beyond corn skiing, our goal was to prove that so-called “epics” can and should happen without fossil fuels. Using just human power and a bit of creativity, big trips can and do exist in our backyard. We knew it would be different—cell service, mangy beards in public, bike helmets while skiing—but it was all an experiment anyway.

The plot thickened when COVID-19 surged, complicating the entire world, including our long-planned spring sufferfest; before the pandemic struck, we were hoping to stop in local diners and shops along the way. Ideally, we wanted to chat with locals and get better acquainted with the rural towns we passed through. Obviously, none of this was in the cards with a highly transmissible virus.

After discussing etiquette, we decided the most responsible way of traveling would be to strictly avoid everyone outside our trio. This affected how we handled food, too. We avoided eating out, grocery store restocks and coffee shops, instead carrying all our food—bars, dehydrated meals, and a few veggies to fight scurvy—with us, from beginning to end. Knowing we’d have to haul the load on our backs, we weighed our load, which added an extra 170 pounds to carry between peaks, but it was the right call.

With physical distancing rules set, we sketched out a few different bike routes, called friends for local beta and began the ritual of refreshing the Mountain Forecast daily. Each peak along the route is (conveniently) spaced 100 miles apart, give or take. We optimistically planned to bike a day, ski a day, bike, ski and repeat; in theory, we hoped this alternating plan would give our respective muscle groups enough time to rest, but even typing that now sounds foolish.

Then came the gear debate: what to pack, how to pack and divvy it up. Unlike most bike-packers, we opted to pull trailers behind our bikes after hearing horror stories of alternatives. We chose Burley trailers, which worked seamlessly, even while loaded with 140 pounds gear. Eventually, we got better at “packing Tetris.”

Onto the bikes. After a healthy amount of research, we picked Diverge gravel bikes from Specialized, allowing us to take Forest Road shortcuts without sacrificing too much speed on pavement. We mounted mud guards, aero bars, water bottle cages, frame bags and Garmin computers to our frames. Looking back after 650 miles of riding, I wouldn’t change a thing about our setups.

The trip began unceremoniously in a parking lot. Lassen National Park had opened a few days earlier, giving us an easy, straightforward tune-up before attempting Mount Shasta, the trip’s highest peak. After a simple approach, a summit selfie and a few yeeowws on the way down, we were back on our bikes, bombing the 20-mile downhill out of the park.

We rode past into the evening, to get within striking distance of the Shasta trailhead, and the going was slower than expected—especially uphill. As we were making dinner, I checked the weather to find our first curveball: Shasta was getting hammered by a winter storm, which meant we had a few days to kill before everything cleared up.

The storm dropped more than a foot of fresh above 12,000 feet, a welcomed reward for camping in freezing rain for a few days. The skiing was excellent, but there were a few ominous signs on the climb. Namely, the snowline was higher than expected, forcing us to question how much skiing we would get on the lower peaks. Yet, we marched on, planning to get up early on ski days and search north-facing aspects for turns.

Two days later, we skied Mount McLoughlin and, two days after that, we scrambled up Mount Thielsen. Following the pattern, we skinned up South Sister before getting turned around in a whiteout by the end of the week. By all accounts, the plan was working—over six days we’d biked 250 miles, ate 40,000 calories each, got clobbered with golf ball-sized hail, camped next to a highway and slept soundly, mastered an instant coffee to powdered milk morning brew, improved our solar charging capacity and fell in love with “granny gear” on our bikes.

Frankly, our biggest accomplishment was staying dry. Two Juneuary storms made for a rainy first week and a half, with precipitation a near daily occurrence. Thankfully, the trailers were waterproof if packed correctly, so the primary challenge was keeping our toes and fingers warm while pedaling.

After drying out in Bend, we made our way northwest past the town of Sisters, where the story started. Jus the sight of a McDonalds was testing with our resolve and questions flew through my head, orbiting around the big one: Why the hell are we doing this?

I pulled a bar out of my bag and spun forward, into the headwind. Chewing on lessons we might get from this adventure, I spotted another wall of clouds on the horizon. Our route was taking us back to the wet side of the Cascades and face-first into another major storm. Par for the course at this point. A few hours later, wet and cold, we stopped early. Jefferson would be a better ski in two days, so we opted to break up the approach. The rain persisted; the entire next day was generally un-fun, but we laughed it off as an ante for a mid-June powder day. But, whether we knew it or not, the gloomy weather and unrelenting pace of the trip were taking a toll. Sometimes, without speaking aloud, we all felt that we were just trying to hold on.

We had heard rumors of Mount Jefferson’s heinous approach; for the record, they are completely true. After a few miles of hiking on-trail, access to the summit is only gained by swimming uphill through thick brush for a mile or more. A few hours later we broke through the cloud inversion, cheered as the sun warmed our faces and stared upward at the jagged summit. Rime ice and high exposure keep most people off the summit pinnacle—including us. A few hundred feet below the true peak, we transitioned, catching a nearly perfect corn cycle. The skiing was some of the best of the trip: as smooth as a groomer and without anyone in sight.

Two days later, we reached Mount Hood, struggling our way up the last climb to Timberline in the late afternoon. After a short night trying to sleep, the climb went fast, as we were able to skin direclty from the parking lot. Clicking in and dropping from the summit ridge, we decided this would be our last peak of the trip. A day later, weathered and still fighting a deep, wet chill that had settled in our bones, we reached the Columbia River in Hood River, each ate an extra large pizza and toasted our foolish resolve.

What I didn’t realize at the time was that our trip was an apt metaphor for life—isn’t it funny how 500-plus miles on a bicycle, toting gear, food and skis will make you think hard and long? We weren’t dealt a perfect hand: there was wet and cold weather, it was low snow year, we had to fix broken gear, had less food than we needed at times and so on—but the purpose of an adventure is to embrace the messiness and carry on, headfirst into the storm, into the unknown, all in the name of something greater. 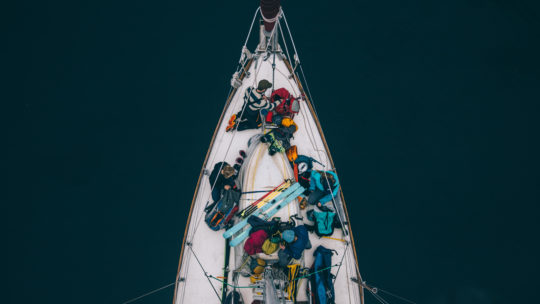