Published on November 9, 2019
by Scott Gaffney 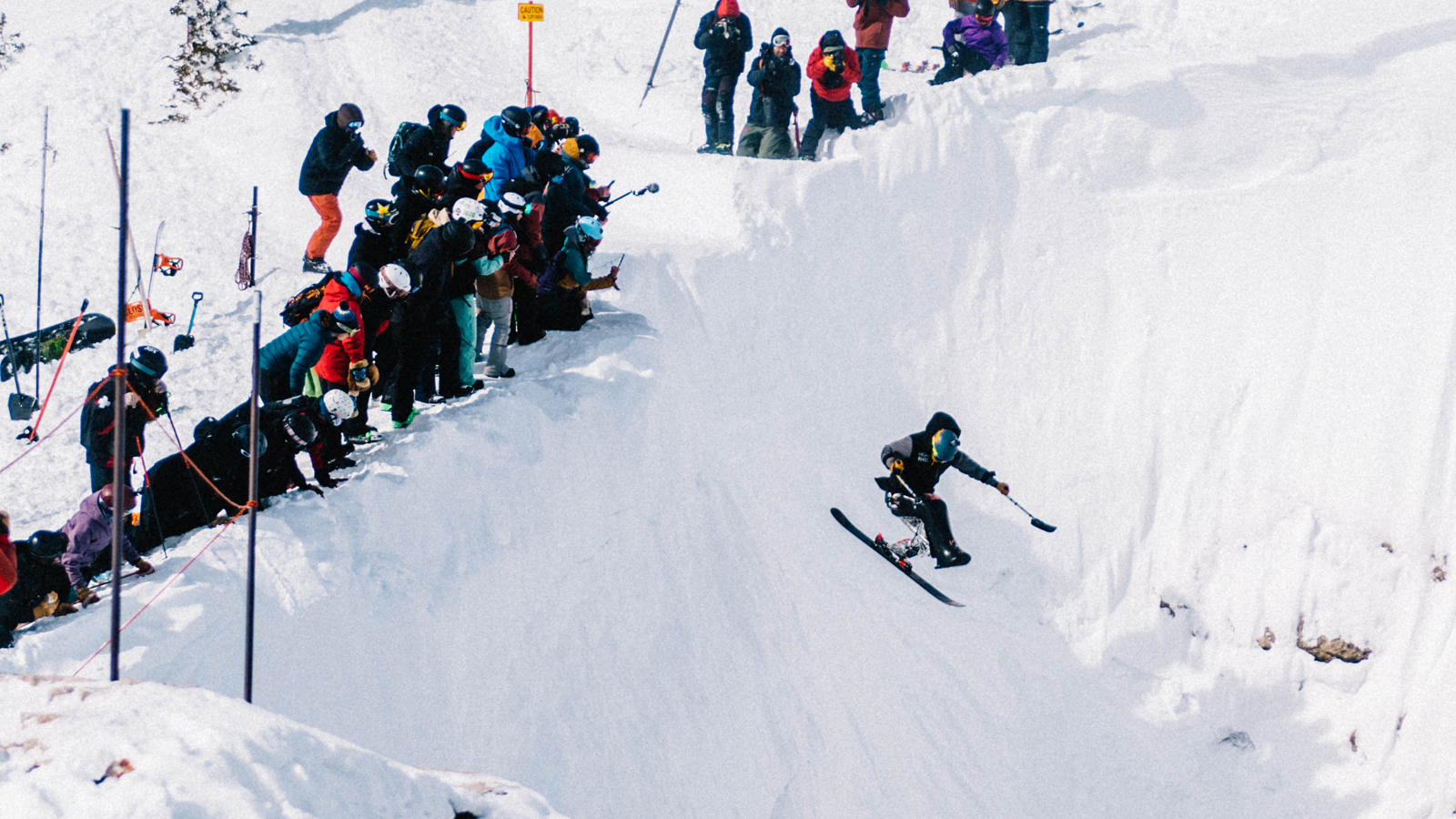 The Year of the Sendski

As he jettisoned into space and the expanse of Corbet’s Couloir opened beneath him, Trevor Kennison couldn’t hear a thing; his fellow competitors back at the lip merely gasped, and the massive Kings and Queens of Corbet’s crowd far below was seized in momentary silence. They’d all been hooting at the stunt-fest all day, but this instance possessed another level of gravity—the “oh shit!” kind that leaves people speechless. Kennison was doing something seemingly beyond the realm of possibility or reason. Sitting in a plastic seat, his paralyzed legs bound by a Velcro strap, he was soaring out and above one of the most notorious chutes in all the world. In a sitski. After dropping 30 feet of vertical he slammed to Earth directly over his ski, maxing the suspension which rocketed him into a rebound launch. He exploded in a poof of smoke then emerged from the cloud. The crowd erupted. Karl Fostvedt, Travis Rice and the throng lining the Corbet’s cornice stood with arms raised, shellshocked. Kennison rode up to the finish corral beaming, awash in adrenaline and joy as thunderous applause, expletives and hugs enveloped him. A thickly-bearded Jackson veteran slid up, pulled out a coveted Jackson Hole Airforce patch and knighted him on the spot. Of course, the moment wasn’t exactly “silent,” as in the Airforce’s Swift. Silent. Deep. credo; this was the send heard ‘round the freaking world.

April 2019, a couple of months after Kennison’s heroics in Jackson, sitskier Jay Rawe was lapping Squaw’s park. He, too, was trying to pull off something that had never been done: a sitski cork 360 off a park jump. Having watched several of his attempts that day, Tanner Hall offered Rawe a few words of advice. “He told me how to slow down the set and not pitch my arms so hard,” Rawe recalls. “I missed the next one but kind of rode out. We chatted again up top and he was like, ‘Dog, you got this. Bolts that shit!’ And that’s what I did.” Jay Rawe set down the world’s first sitski cork 3 to the ecstatic howls of a freeskiing legend. Within a couple of weeks, Rawe was linking back-to-back-to-back cork 3s. But he didn’t stop there. In mid-May at Boreal Mountain, after an array of slams and washouts, he rode away from sitskiing’s first-ever cork 5.

With both Kennison’s and Rawe’s triumphant feats sweeping across social media, many were quick to hail 2019 as the “Year of the Sitski!”

February 2012, Josh Dueck stomped a massive sitski backflip in the Whistler sidecountry. Dueck made national news, even landing on Ellen. Yet, as inspiring as Dueck’s feat was, it didn’t exactly stimulate a movement. No one was committed to follow suit, and Dueck was alone at the top of a sport. That’s not to say sitskiers weren’t jumping cliffs or riding steeps or charging fast—they definitely were—but whereas able-bodied freeskiers were adding new tricks and tacking on yet another rotation at a ridiculous rate, sitskiing had only one holy grail of a backflip that was placed on a pedestal and sat there, untouched, for six years.

At the time of Dueck’s flip, Kennison was a 17-year-old competitive swimmer and avid snowboarder, who would soon move from his home in New Hampshire to Vail, Colorado. Rawe, a 22-year-old Floridian skydiver, would soon relocate to Utah intent on becoming a BASE jumper. Neither caught wind of Dueck’s feat, and, frankly, they didn’t pay sitskiing much heed. They were simply young, fun-loving guys grabbing life by the horns.

But their lives changed in an instant. In March 2014, 25-year-old Rawe was performing a BASE jump with his friend, Austin Carey, off the Perrine Bridge in Twin Falls, Idaho. Rawe was standing on Carey’s shoulders when Carey’s forward leaping push sent Rawe awkwardly back. He immediately became entangled in Carey’s pilot chute bridle and his own pilot chute wrapped around his leg; both men plummeted 480 feet to the ground with their canopies sniveling and barely slowing their fall. They struck dry ground hard, and both broke their backs. Rawe suffered an incomplete spinal cord injury, severely diminishing the strength and function of his legs.

Early the following winter while Kennison was hitting a kicker in the Vail Pass backcountry, one of his jumps went awry and he pitched forward, slamming onto his back. According to him, he “folded like a taco” and heard a loud pop as his L11 and L12 vertebrae fractured and punctured his spinal chord. Kennison knew immediately he was paralyzed. He recalls, “I looked at my feet and I couldn’t feel shit.”

Rawe was faced with the ordeal of learning to walk again–from wheelchair to walker to cane; Kennison was confined to a wheelchair. Both men retreated home to Florida and New Hampshire, respectively, to face the process of recovery and adaptation to their new lives.

But being isolated from the mountains and deprived of the active lives that defined them took a toll. “I was definitely not doing well mentally,” Rawe admits. “Smile on the outside, lost on the inside.” Living on a friend’s couch and forced to pee in an empty bottle because the house’s bathroom was located upstairs, Kennison struggled with depression. “I literally didn’t know what to do,” he says.

Fortunately, Kennison returned to Colorado where his sister introduced him to sitskiing. He was back at square one in regards to sliding on snow, but he sensed something he’d been missing. “It felt so free,” he says. “I fell in love with it.” Before long he was hitting park jumps and sliding rails. The broad smile and radiant positivity—traits Kennison is renowned for—were back. He says unabashedly, “Skiing saved my life.”

Rawe headed west in the fall of 2016 with his girlfriend. With little control of his feet, his options for adventure were limited. He was not a snow fanatic—he considered himself an intermediate snowboarder prior to his accident—but at the encouragement of his mom, he tried sitskiing with Wasatch Adaptive Sports at Snowbird, Utah. “It gave me something that I didn’t realize I needed so badly. I never pictured where I would go with it, I just knew how happy it made me to find something to break up the monotony that my life had started leaning towards.”

Curious to learn more about their new passions, both Rawe and Kennison dove into the internet. “I wanted to do jumps, rails, sidehits and backcountry,” says Rawe, “So I was looking for anyone who was doing those types of things to see what was possible and how to do it.” Inevitably, they discovered Dueck’s backflip, a feat they both consider a “landmark.” Rawe says, “I just thought, ‘Yes, so you can get rad on these things!’”

Rawe moved to Tahoe and rode religiously. In May 2018, the Squaw park was still in full swing, and Rawe—in just his second year of riding a sitski—was in the midst of intensive experimentation and progression. He was sending Squaw’s big jump line, incessantly destroying gear, swapping out skis, replacing sheered bolts and going back up for more. He pulled off inverted alleyoop re-entries on a quarter pipe one day, and just days later he boosted a backflip out of the mushy pipe and landed with an authoritative stomp in the flats as surrounding riders went nuts. Without notice, he’d pulled off the first sitski backflip since Dueck’s six years prior. Shortly thereafter, he exited the same quarter pipe with a flat three. Then, in 2019, Rawe landed 180s, the cork 3 and 540. And a couple of over-rotations on the 540 had his mind wandering even further. “When I saw Jay’s 540,” Dueck says, “I was like, ‘What the fuck is going on?’ It just blew my mind wide open. Those boys are doing things that I didn’t imagine. Which I think is great. Because I’ve got a pretty wacky imagination.”

Kennison stomped his first backflip this past winter in the Jackson Hole backcountry a couple of weeks after the Kings and Queens event. He’s now landed seven backflips. Like Rawe, he has no intentions of stopping there. A double back, road gaps, heli-skiing, urban and the 2022 Paralympics are all on Kennison’s hit list.

Looking forward, the post-Dueck-backflip lull is gone. Kennison and Rawe have injected a burst of energy into sitskiing and consequently, a swell is rising behind them, in vigor and in numbers. Both men like to think that one day, big-mountain and freestyle competitions will be available for adaptive athletes. “If people in the sport really want to charge, then I don’t know what the limit is,” says Rawe. “I can envision a not-too-distant future with several of us riding big parks and taking this to another level. If that level is purely for fun or competitive, I’m not sure. I do know that I’m going to keep pushing my own limits. For me right now, the door is open and I’m just waiting until next season to see what’s on the other side.”