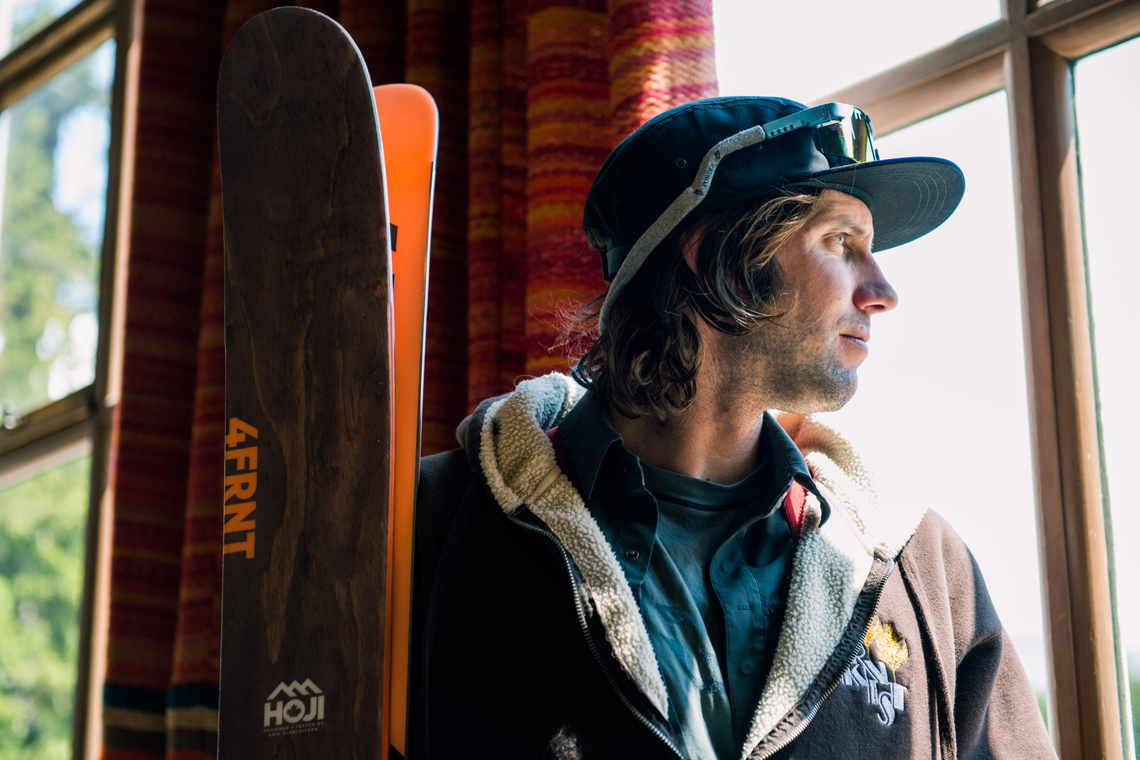 To say that 2018 is a big year for Eric Hjorleifson may be an understatement. “Hoji,” is about to premiere his own film project, in addition to having his patented invention—Dynafit’s Hoji Pro Tour Boot—hit the market after four years of development as well as completing an update to the cult classic 4FRNT Renegade ski—one of three he has designed for the brand. The year is a culmination of sorts, but Hoji will be the first one to tell you he isn’t done yet.

His fluid style of skiing, with perhaps the most centered balance ever witnessed since Coombs, keeps viewers engaged as he skips down pillow lines. Equally impressive is his influence on the industry. His name has been associated with gear that has redefined new norms. He’s a skier’s skier—pushing the boundaries in every way possible, both as an athlete and product designer for the love of the sport. Last season I spent some time on the new prototype Renegade and recently caught up with Hoji as he was wrapping up the editing for his film, Hoji—spending nearly two weeks hunkered down with filmmaker Scott Gaffney in his Lake Tahoe home as they finished the movie, which premieres in Boulder, Colorado, on October 17, 2018.

Editing the film with Gaffney has been an emotional roller coaster. I’m not the personality to show boat, and I’ve been watching so much footage of myself and people talking about me… It has been a lot of stress, trying to portray the vision I have for the film and what events mean to me.

I was only supposed to be here for a few days and I realized there was a lot of work. We have footage from my parents’ old camcorder—family videos, 14 years of Matchstick Productions’ films, and new footage from this past year. When I got to Gaffney’s, he had it so organized and knew where it all was. I can’t comprehend how he did all that… He’s a real genius and loves skiing more than anything in the world.

One of my favorite things [from the film] was the opportunity to put together the Sentry Lodge trip. Skiing with my dad, brother, ski racing coaches, Matty Richard and other athletes along with various members of the Golden Alpine Holidays staff that have helped me out so much over the years. It was a thank you and group shred. I was kind of the ringleader and it was a bit hectic, but we had so much fun. I believe that’s a big part of skiing: the people we ski with. I feel that will come across in the film, every time I watch that it makes me smile.

Chris Rubens and I skied in the Canadian Rockies last March, it was pretty special. We had a stable snowpack that is unique for that region and skied some classic lines. The final trip was back to Golden Alpine Holidays, and we got the opportunity to ski some alpine zones I’ve been looking at for a while.

The timing of the boot and film release was serendipitous. It wasn’t perfectly planned out that way. A lot of those timelines are way out of my control and I’m really happy the way it’s working out. The gear development and boot story, as well as ski touring all have key elements in the film—they have been a big part of my life in recent years. People will see the story behind the boot because I think it’s a good story.

Fritz and I worked so hard on the boot for many years. [Fritz Barthel, is a boot engineer and inventor of the Low Tech Binding]. I’m optimistic it will perform the way it’s intended to. That unknown still hangs over me; just because I care about it and the last thing I want is people to spend their hard-earned money for something that doesn’t work [for them]. I put so much into it and really care—I’ve been getting good responses from the Dynafit guys, which is a good sign.

The Hoji Pro Tour is a platform and it’s just the beginning. The boot evolution is still going and there is still work to do along with things to try. We made a ski touring boot that has really good skiing performance, and it had to align with Dynafit and their market position. I think the boot brings some advancements to the table. It’s not the be-all-end-all, but I think it does raise the bar for those who use it for what it’s intended for… With future projects, the next evolution is in a different category—ski touring and freeriding as a closer community. [Generally] in Europe no one is thinking about skiing fast on fat skis, or jumping and skiing aggressively. 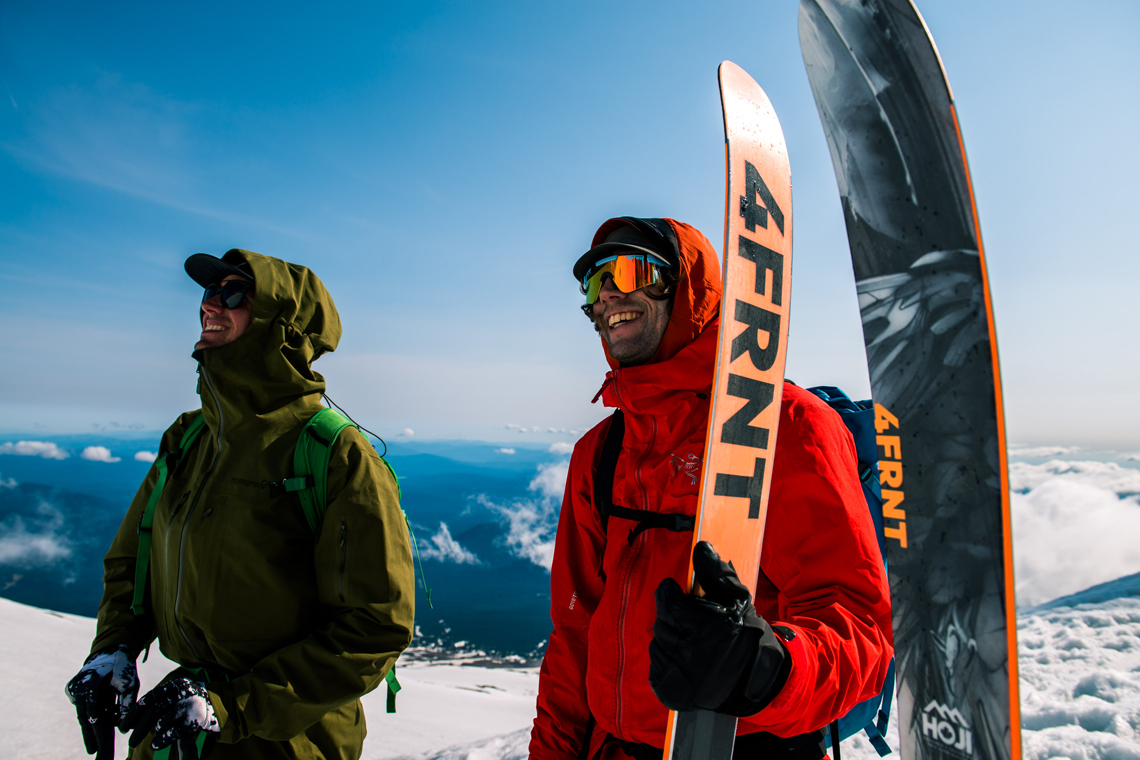 Matt Sterbenz worked harder than anyone I know to build up 4FRNT. His dream was to make sure the company was able to survive and be in good hands [Jason Levinthal owner of J Skis bought 4FRNT in June 2017]. It has been great working with Jason – we get along well and things are moving along. He’s been really receptive with early stuff from the new factory and loves the brand identity. The main thing is making the connection with the factory and learning about their methods and explaining how we’ve done it at the White Room [4FRNT’s Salt Lake City Factory where the Renegade and several other models were made]. Thayne Rich, who has been our prototype ski builder will be there this week. The goal is to keep the consistency and maintain the kind of skis that 4FRNT is known for.

The Renegade is eight years old and it still stands up to the times. Last year we tried to get more float out of the tip and attempted to expand on its performance but we changed things a bit too much. After prototyping, the production models are now just a mild departure from the original tip we’ve come to know and love, with the ski having a slightly reduced sidecut and available in new sizes. I’m always blown away how such a subtle change can make a huge difference… Those skis are my workboats. They’re so versatile and I find them hard to beat.

Dynafit owns the patent for the Hoji Boot, but I’m credited as the inventor. Fritz could have been on there as well, but said to me: ‘No. This is yours.’ I feel like the boot could elevate my opportunities—I had an idea I really believed in and wanted everyone to ski on it. It would be a step in the right direction. It will add some credibility to my product involvement, which is something I’m very interested and uniquely passionate about. But, I’m not done filming yet! As long as people continue to like watching my skiing and it’s not boring, I’ll be filming. I feel very fortunate to do so and to have this wonderful career. 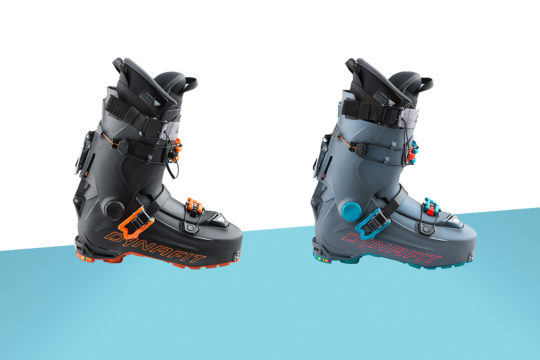