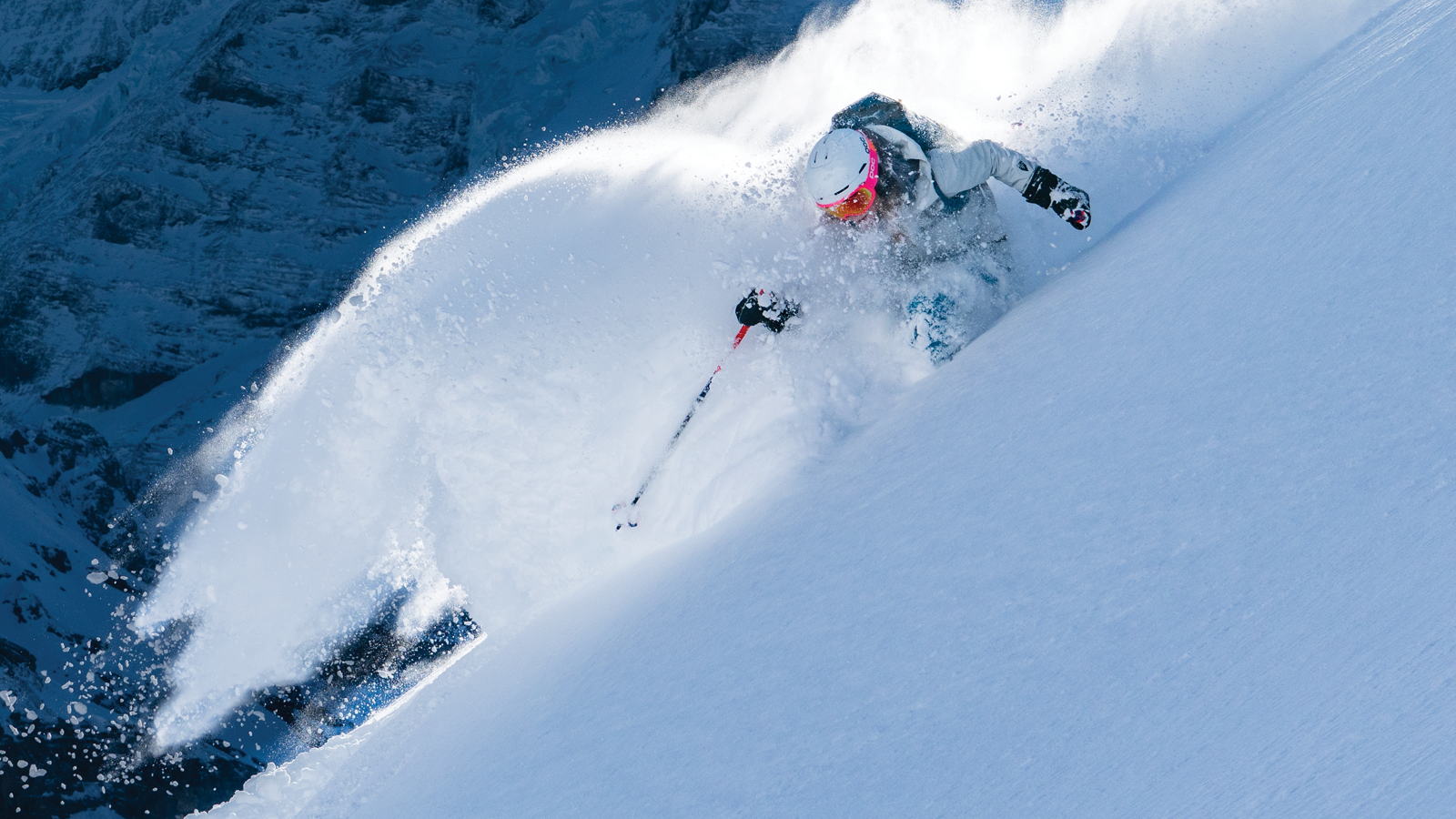 The world’s most beautiful ski resort

Mürren was the Alps’ first true ski resort, but it’s almost invisible in the shadow thrown by today’s popular giants. Is there a good reason? No.

“Can you ski that face?”

“So why are there no tracks on it?”

Because I’m writing for an American magazine, I won’t bite the hand that feeds by insulting readers. But, oftentimes, the variance between skiing in North America and the Alps is like the difference between going to the zoo and getting up close and personal with a lion on the African savanna. The conversation above, for example, between Swiss guide Andreas Abegglen and photographer Cam McLeod, demonstrates how a notion lurks in the back of North American skier’s minds that says, “If it isn’t tracked, it must be closed.” But then, that’s the sweet thing about the Alps—almost nothing is off limits and there’s plenty that never gets skied.

Our trip to Mürren, Switzerland, couldn’t have had a better start. Well, the sunrise, and its spectacular play over the towering mountains made me realize I’d have to anoint Mürren as “The World’s Most Beautiful Ski Resort,” and that kind of sentimentality made me feel odd inside. But, cheesiness aside, there was no way to resist.

From this point on, however, there was little to complain about. We had a local mountain guide showing us around, there was deep, virgin pow in pretty much every direction—minimal hiking required, thank you very much—and we had a good crew comprising myself, a grumpy old ski pro; Madison Rose, a young, high-energy skier; Marcus Caston, the skier possessing perhaps the world’s most famous turn; and Cam McLeod, a motivated sharpshooter.

The skiing in Mürren is often referred to as, “a lot of south,” but as we prepared to unload the Schiltgrat chair at 2,100 meters, it seemed much of the untracked snow was actually facing due north. That was perfect for us, of course, and we buckled our boots and yelled to Cam, “We don’t want to shoot in the shade anyway, and warm-up runs are important, so see you down there!”

Somehow we didn’t hear the eagerness in his photographer voice as he responded, “Wait, you guys see that sunny ridge over there?” as we dropped in.

It was steep, deep and a bunch of other similar adjectives that are only uttered on really good days at really good ski resorts. Cam, a mellow, non-maniacal photographer who doesn’t need to shoot every second of a trip, quickly adapted to the situation, and shredded behind us at a speed that shouldn’t be possible while carrying a fully-loaded camera pack. By the bottom of the first big pitch, we were all on the same page, and quickly agreed that it was quite important we all make some more steep and deep warm-up runs to get a better overview of the area. Thus, until lunch, we took full advantage of our guide, our motivation and the deep snow.

Directly facing some of the biggest, most-celebrated peaks in the Alps, the little town of Mürren sits neatly on a shelf above an almost 2,500-vertical-foot wall. You’ll find the closest parking far below that wall because the only way up is by tram and cog train, and the only vehicles allowed in Mürren are rebuilt golf carts. As a result, the town’s snowy streets aren’t plowed, but packed down, making skiing the easiest way to get around. And believe me, you want to get around. Mürren delivers an experience that’s pretty much as far from a modern mega-resort as you can get.

As we continued exploring on our first day, the feeling that we were not going to have enough time to ski all this awesome terrain crept in. We tried to embrace the positive side—we were having a darn good time, and all of those unskied lines were the perfect reasons to come back. It’s actually the reason that people have been coming to Mürren for such a long time.

Beginning in the mid-1800s, Mürren grew steadily as a summertime climbing and leisure resort, but it wasn’t until 1910 that a British tour operator convinced the owner of the local cog railway to remain open during winter. It was a wise move. Mürren became the world’s first resort for ski tourists, and is often seen as the cradle of alpine skiing. Indeed, the “Village on the Wall” has a number of firsts on its resume, most notably, it was the site of the first Alpine World Ski Championships in slalom and downhill in 1937.

Our own days in Mürren continued in a way that was anything but race-like and more similar to a vacation. We weren’t sleeping on the job, of course, but, the combination of shredding and shooting was easier than it normally is. Conversations similar to the one that kicked off this story occurred every day, and there was no reason to hike our asses off for a line just to milk a couple of hero turns because those dreamy plunges into deep snow were commonplace during our ski days. For instance, Hollywood lines straight under the Riggli chair were untracked because no one seemed to have bothered jumping the five-foot cliff required to access the goods. We obliged. At this point, it would be easy to make a joke about the tourists that frequent here, but I’ll refrain. Let’s just say that a lot of visitors to Mürren aren’t overly eager to step out of bounds to shred pow.

Even for powder-hungry freeskiers like ourselves, however, the inbounds slopes weren’t too shabby. The links between different powder zones followed long, sweeping pistes shaped by natural mountain terrain rather than flattened out by snowcats to boring perfection. They narrowed where there was a gully and spread wide over open meadows, making for a truly immersive ride in a natural setting.

With a population of 450 and only 2,000 hotel beds, Mürren’s reputation as a cozy little mountain town remains intact. The ski area isn’t huge, but it’s big enough to effectively spread out most of those skiing it on a regular day. Slopeside restaurants also reflect the hideaway atmosphere, and I found it hard not to overuse the word “charming” when referring to them. The space-agey revolving restaurant at the very summit of the resort, Piz Gloria, was a bit of a different story, but still worth a visit. Besides the appeal of having a meal in a restaurant that spins 360 degrees in 45 minutes (it’s good for digestion, apparently), there’s a James Bond exhibition commemorating the fact that scenes from the 1969 thriller, On Her Majesty’s Secret Service, were shot here. Also, the toilets are well worth a visit. There’s a giggle guarantee when, “James! Where have you been?” emanates from the toilet speakers once you’re seated.

The high-pressure weather system we’d been enjoying ended on our last day, but it was a welcome change. We were blessed with a reset that upgraded the tree skiing on the lower slopes from “heavy going” to “blower, baby.” Like the rest of Switzerland, you need to pay attention here to officially designated wildlife zones where skiing is prohibited. But, just playing around the old farms and houses in a Sound of Music setting more than made up for anything we might have missed. Looking at some of those old homes was quite surreal—especially when you see the year of construction carved into the wall. We wondered what farmers who built here several hundred years ago would think of our fat skis and fancy gear.

Off the slopes and down in the village we were back in the 21st century, and the energetic après at Gondel Bar caused us to all but forget about old houses. After shaking our asses to the music for as long as we could manage following a long, final ski day, we clicked back into our skis just outside the bar and wiggled ourselves through the streets of Mürren to our hotel. That’s the mark of a great ski day, if you ask me.

Oh shoot! I forgot to include the “most beautiful” part of the ski resort—the world-famous, incomprehensibly massive Eiger, Mönch and Jungfrau horizon line that faces Mürren. I guess the skiing was just more interesting. And that’s saying something.

Fly to Zurich, Geneva, Bern or Basel and take the train from there. Swiss trains are the best in the world. You don’t need a car—they’re not allowed in Mürren. For the last leg up to Mürren, take the gondola from Stechelberg.

Gondel Bar is a must for après. If you’re there during the famous Inferno-Rennen amateur downhill competition, stop in at Winteregg for a few beers and a panoramic view of drunk people in speed suits.

Rotating restaurant Piz Gloria, located at the top of the resort, is a must-visit. Suppenalp, found right next to the Suppen slope and the local’s favorite, possesses a great vibe and incredible food. For a proper Swiss dinner, try Hotel Alpenruh’s restaurant. Hotel Eiger is one notch up in price, but a great classic in town.

Hotel Alpenruh has fresh, rustic rooms, a hearty breakfast and a great location close to the lift. Hotel Eiger is a bit more expensive, but the panorama windows at breakfast might be worth it. If you’re on a tighter budget, Sportlodge Mürren is a good option.

This story originally appeared in FREESKIER 22.4, The Destination Issue. 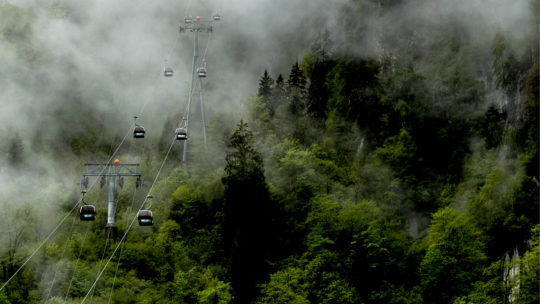 The Hills Are Alive!