The Wicket: How to ski into love 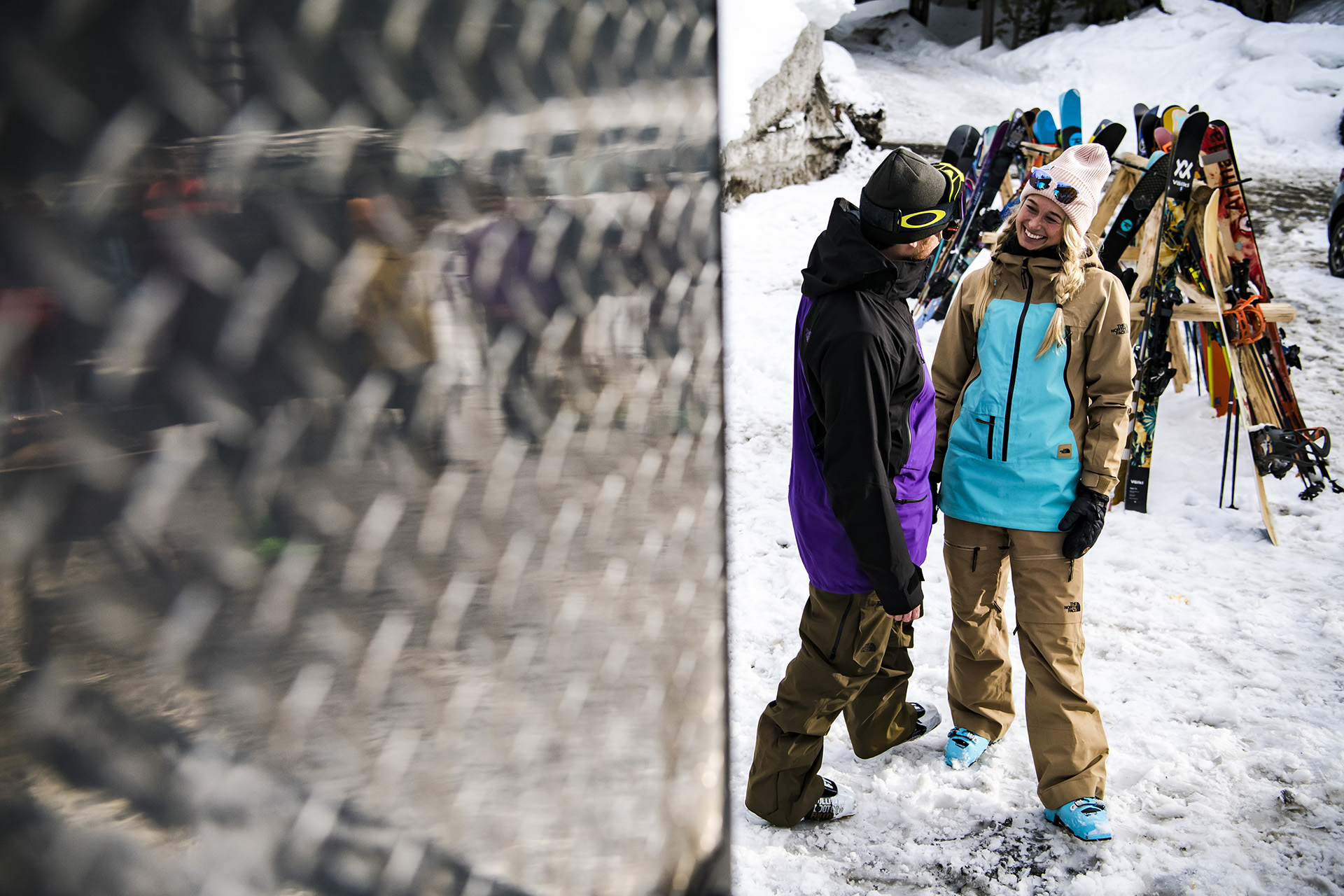 The Wicket: How to ski into love

Lovin’ in the mountains ain’t easy, but it doesn’t have to be impossible.

Love is the calculator-less long division problem of my life, that is to say, it is completely and utterly confusing to me. I’ve found it easier to navigate an Ikea while blindfolded than the aisles, hallways, cracks and crevices of ski town dating. And while we all cherish ski towns for the adventures they hold, the slow paced-fast smile lifestyle they offer, we skiers regularly bemoan their shallow and often greasy dating pools. Dating in a ski town is tough, and figuring out how to maintain a long-lasting, fruitful partnership seems more difficult than powder day lift line jockeying. However, there are goggle-tanned skids that have cracked the algorithm of the heart. But…how? Well, I asked.

In our community, time together outside is a chief component of a successful relationship. Skiing’s version of Dirty Dancing’s Baby and Johnny, professional shredders Elyse Saugstad and Cody Townsend first open mouth kissed in the winter of 2005 and were married in November of 2011. “The passion that we both have for being in the outdoors is something that brings us closer together. I think when we first skied together is when we really fell for each other,” Saugstad said.

Townsend echoed his wife’s sentiment, saying that they’d probably make it as a couple if they were indoors folks but they wouldn’t be as happy or know each other as well. And when I asked Townsend about the things Saugstad does to make him feel loved and how he makes sure to reciprocate that, he offered this: “Probably the unending support of what feels like a teammate through life. Just being there for every up, down and all the way around. It’s truly special to have that, to feel that and to understand you have this safety net at all times. And I try to provide the same for her.”

For Saugstad, the ingredient list for a successful romantic relationship looks the same as a solid backcountry skiing partnership: showing up prepared, having flexible objectives and being ready to compromise, having similar aspirations and goals and being an excellent communicator. Townsend and Saugstad’s open, honest communication on the skin track is the same at home, which is also how my pals Kir and Penn Newhard have navigated life together.

The Newhards are one of those frustratingly attractive and athletic Colorado power couples. They’ve been married for more than two and a half decades. Their first date was on skis, as was much of their courtship, as is how they still spend most of their winter together and time with their four children. Kir says the outdoors, skiing, in particular, is where they thrive, what makes them tick. She points to forgiveness, acceptance, work, tears, struggle and celebrating the moments of pure joy—characteristics of a life spent in the mountains—are the gears that keep the mechanism of their relationship in a forward movement.

Kir told me that one of the major staples of their decades together has been allowing Penn the chance to help her change things within herself, help her grow, and that he allows her to do the same for him. “It’s also important to let them be their own person,” she told me. “He writes me poems all the time, like all the time. But I feel most loved when he accepts my flaws and still loves me.”

When I asked Penn about how he manages this balancing act, this give and let give, and what love means to him, he didn’t answer right away. He thought about it on a skin track and got back to me 24 hours later: “I think love is kind of misrepresented in the world. People say you fall in love, almost like a mistake. Society looks at it as a gift or a fairy tale. I think love is three parts: faith, doubt and effort. The faith part is emotive, you must believe—it is spiritual and human connection based. Faith is greater than logic and unites people. The doubt piece comes in because nothing great that is achieved is easy. The effort part is simple. You get out what you put in.”

Finding, keeping and cherishing love takes a lot of effort and, like skiing, also takes an unconscious competence. You have to work for it and at it, but at a certain point you have to release yourself to it. My friend Massimo Alpian told me that “like skiing off a steep cornice drop, love is bigger than us, and like skiing chest-deep powder, you have to balance surrendering your mind and body while still controlling where you go with love.” Massimo and his husband Brett have been married for six years, and together for 14. And they’re so joyously, disgustingly in love that it’s like watching a wonderfully cheesy romantic comedy in real life. But Hollywood clichés have never been a part of their story.

“The integrity of our marriage has always been built on trust and having each other’s back,” Massimo described to me. “Strengthening our bond through memorable adventures leaves us more and more connected each time.” Brett and Massimo have skied eyeball deep powder at home in Colorado, they’ve shredded steep lines in Alaska, they’ve traveled all over the world for adventure. But Massimo also gets up early to make breakfast and Brett is the handyman around the house, does things like gets the tires rotated. Their adventures seem to be that much more meaningful and memorable because the small things they do for one another keep the fire roaring in their marriage.

Like Massimo and Brett, my friends Hannah and Wade have one of those relationships that make your heart feel like fresh baked cookies. All four must have gone to the same relationship master class, because Hannah and Wade also point to the little things at home, like cooking dinner, balancing finances, arguing over the dishwasher, as where the testing and learning of their relationship happens. And being outside together is where they can celebrate their marriage. “Whenever we find ourselves touring some ridge or floating a river, Wade will say ‘Now this is living. This is our life.’ And I agree. It’s just the closest we get to a real expression of our relationship,” Hannah said.

“My experiences and memories are so much more potent and powerful when I’m with Hannah,” Wade told me. “Being outside together, whether it’s skiing, boating or walking our dog Pancho, is when I feel like life is actually happening.” Hannah and Wade have this remarkable ability to use the proven ingredients while also changing the recipe of their relationship. That way, they both feel they’re catering to the needs and wants of the other while continuing to grow and keep things fresh. Added to that is their unending doting on one another.

Last winter, I skied with Hannah and Wade at Snowmass. It was a classic Colorado bluebird powder day. The snow was as plentiful as the stoke, smiles and laughter. We traced deep, creamy lines through thigh-deep snow all day. At one point, Hannah and I stopped together and looked up at Wade descending toward us. “Ooooh, look at my man,” Hannah said. “God, I love watching him ski.” She yelled I love you at him while he carved in the deep white.

Later, Wade and I stopped and watched Hannah drop knees in rhythmic telemark turns. “I could watch that woman ski all day. She is such a pretty skier,” Wade told me. “I just love her so damn much.” On the very next run, Hannah caught a tip and fell, and while she floundered to dig herself out, Wade slashed a wave just above her, covering an already powder-swallowed Hannah with more snow. They both laughed. And then they made out. And if that’s not just the best damn, heartwarming, hilarious ski-relationship story you’ve ever heard, I just don’t know what is.

For those of us still on the path to finding our person, I think it’ll serve us best to scrap the ski town dating lamenting and take lessons learned from these couples. Like skiing trees, rather than focusing on fear of the things we want to avoid, it’s best to aim at open space, the beautiful swaths of deep powder snow we want. And once we get there, cherish it for every tiny, beautiful thing it offers, forever and ever. Also, I think making out on a regular basis helps, too. Happy powder skiing and smoochin’, pals! 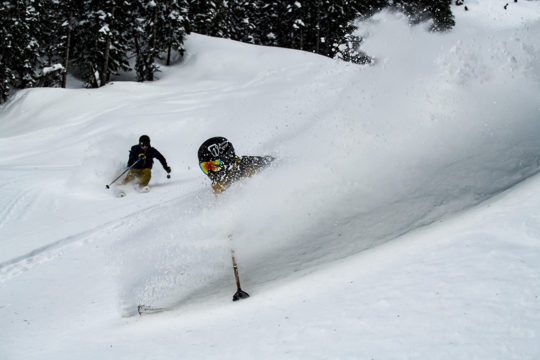 The Wicket: “No Friends On A Powder Day” is the credo of the Dickalope