The Spirit of the Andes 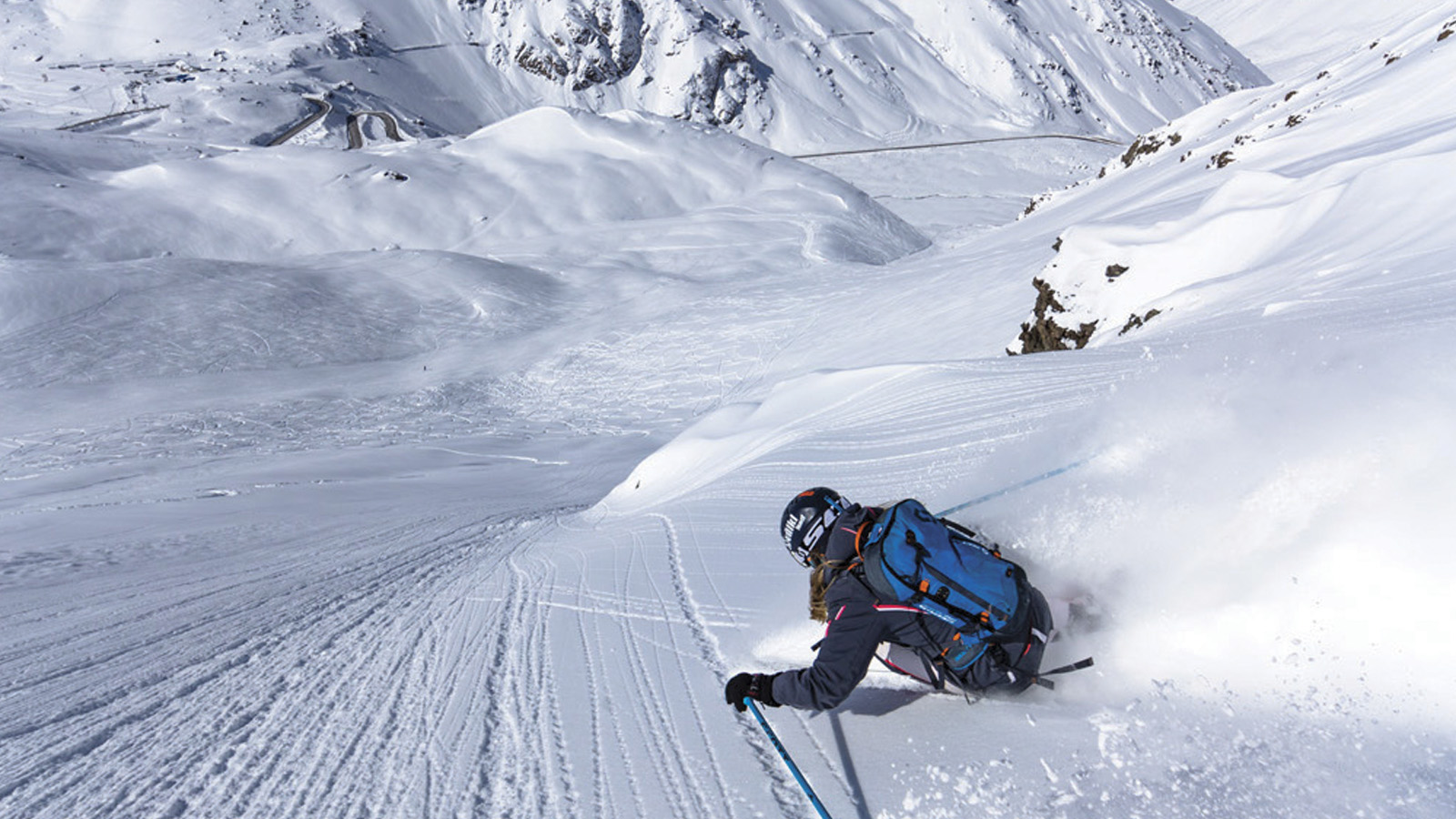 The Spirit of the Andes

Pro skier Chris Davenport skis up to the plaque memorializing the late Shane McConkey, placed along the rocks underneath the Plateau lift in Portillo, Chile. He shares the message aloud, then refills the plastic bottle of Jim Beam that calls the shrine home with a somber, “Miss you buddy!” to the freeskiing pioneer.

It was my final day in Portillo after traveling there for the first time. For years, I had tried to make my way down to the Southern Hemisphere to ski without luck. Then, thankfully, this past August it all came together, and I was fortunate to spend time with Davenport and hear some of his stories. Davenport has been traveling to Portillo every year since the ‘90s, initially beginning the pilgrimage for photo shoots and then running his Superstars ski camp there, in addition to working as an ambassador for the resort. He, Wendy Fisher, Chris Anthony and Mike Douglas spread some of Shane’s ashes in the Laguna del Inca, the glacial lake below us, after Shane passed away. Portillo was, and still is, a special place for them, and rightfully so. My week wasn’t only full of rad skiing and pisco sours, but it served as a history lesson in how this great place came to be and the impact it has had on both alpine racing and freeskiing.

Traveling to Portillo isn’t a short endeavor, however, our trip down was relatively painless. Arriving in the city of Santiago, Chile, following 15 hours of air travel from Salt Lake City, Utah, we traveled another couple of hours by car up into the mountains—climbing up roughly 30 hairpin turns on a burly and dangerous mountain pass. The international highway we’re on spills down towards Mendoza, Argentina, after reaching Portillo and serves as the main road to shuttle goods all the way to Sao Paolo, Brazil.

Upon arriving in Portillo, the long travel hours are immediately forgotten. Flanked by steep avalanche paths on each side, Hotel Portillo sits in the valley atop the pass and is surrounded by incredible peaks and outstanding skiing. Its bright yellow paint job is symbolic, a beacon of light for starved Northern Hemisphere skiers looking for summer turns. Of course, the locals love it, too. Just beyond its wood-laden lobby floors, where Petra the St. Bernard greets visitors, the windows reveal the true beauty of this place: the Laguna del Inca.

Glistening in aqua blue-green, the lake bisects the snowy ramps and distant alpine peaks. It’s a postcard view that stops you in your tracks. According to folklore, the Laguna del Inca is haunted by the spirit of Inca, Illi Yunqui, who buried his soul-mate, Princess Kora-Illé, there after she fell from a cliff during a royal ceremony. When Yunqui lowered her into the blue lake, the water began to resemble the emerald tone of her eyes.

The deep, shimmering lake was in full view minutes after checking in. With the afternoon still ahead of us, our crew booted up under the bright, late-winter Chilean sun. It was a relatively dry winter in Portillo when we visited, but a storm blanketed the area the week prior to our arrival, and we quickly scooted for some laps on the iconic Lake Run. After a short traverse or bootpack, the Lake Run is accessed from the Condor lift. The Condor is a va et vient lifts (think four-pack rope tows ascending steep avalanche paths) that was designed specifically by Poma to match the steep terrain and withstand avalanches—eliminating chair lift towers that would inevitably be buried in the consequential terrain. With the trickiest part behind us, I quickly found my skiing legs, beelining it to the lake in awe of our surroundings with the mountains symmetrically reflecting their flanks into the water below.

“When I first came, the only way to get here was by train,” explains Henry Purcell, long-time owner of Portillo. “It was a dirt road in the summer, and when we got a storm, you were here a couple weeks without supplies coming in… Sometimes, you could get only as far as the switchbacks, and we’d go down and carry the guests’ luggage as they’d walk up.”

Originally built by the Chilean government, Portillo was placed up for auction in the 1960s. It was then that Purcell’s uncle, Bob, bought it with a group from New York. Henry Purcell went on to run the hotel and ski area for the next 55 years—he bought it outright in 1980. “There wasn’t much here at the time, when it was initially purchased,” he says. “But we came in with the idea that we wanted to increase the reputation of the hotel and bring the World Championships here if we could.” In 1966, Portillo hosted the first, and only, FIS World Championships in the Southern Hemisphere. Many folks still recall that special event, as it placed Portillo on the map, but Purcell notes it wasn’t just the World Championships that helped this special place shine, it was the countless visitors that continued to visit Portillo after the event.

Hotel Portillo is a small, intimate place, holding roughly 300 guests. It felt like an Adirondack lodge with a family atmosphere akin to a large scale B&B, with hosted seatings for breakfast, lunch and dinner. Hispanic music casted a jovial vibe as you walked in from skiing before making your way to the hot tub. The laid back atmosphere was perfect for “summer” turns. Even when it snows, the mantra is casual. Operations manager Mike Rogan explains, “It’s pretty special when you wake up in the morning and you know you’re not going to ski because it’s so stormy. When the wind is blowing, and you can start to feel the windows move and shutter, and you know you’re stuck inside as it dumps three to five inches an hour and you’re going to get the goods, it’s pretty cool. Once it clears, you look out the window, see what you can see, what’s still standing and what may have gotten hit, what slid and where we can go. I love the violence of a winter mountain storm at 10,000 feet in the Andes.” Rogan, like many others, arrived in Portillo in the ‘80s, and hasn’t missed a ski season since.

DPS’ Powderworks division skis are a limited release selection of the company’s most progressive designs cooked up in the Salt Lake City DPS Factory. They’re only on sale a handful of times per year during special release events. The skis on Erme Catino’s feet, here, became available for the very first time this past summer during DPS’ annual Dreamtime event. Rumor has it, they will likely be unveiled this month at the Outdoor Retailer Snow Show in Denver as an in-line offering for ‘19-20.

During my week, winter was transitioning to spring, and while there weren’t any window shattering storms, the sunsets were magical and the recrystallized powder on shady slopes was rippin’. With many of the popular runs tracked and firm, I scouted a line down valley from the infamous Super C Couloir. With a couple keen skiers, I set the bootpack up following a traverse out from the Roca Jack. Somewhere in the vicinity of the Ultima Quebrada, we hiked up towards the terminating cliffs above and found an amphitheater-like cirque that spilled into a chute, dumping us towards the mountain pass road switchbacks. At the bottom, tractor-trailers buzzed by us at vicious speeds as we unclicked from our skis. Gleaming and satisfied with our vision quest, we decided it was time for the hot tub.

Skiing with Davenport on my final day, we charged around the resort during the final few hours of sunlight. The sun was warming the whole mountain, and we stayed out till the bell. We capped off the ski day at the bar for some après before the evening festivities began. There, stories of Fidel Castro visiting the hotel, women hanging on chandeliers at the bar while live music jammed and other ski town debauchery emerged. It’s easy to fall for the charm of this place, it’s what makes skiers of all types return year after year. From the friendly employees who have been here for decades, to generations of families who visit each year, to the crew of dirtbag North American skiers seeking powder in the summer months. Holed up in Portillo, it’s a close community. There’s a special spirit in the Andes, one that’s captured me and all but guaranteed my return. 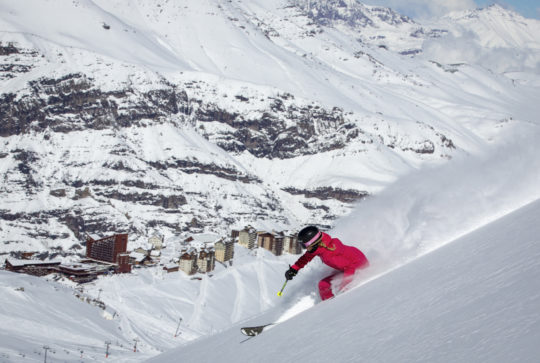