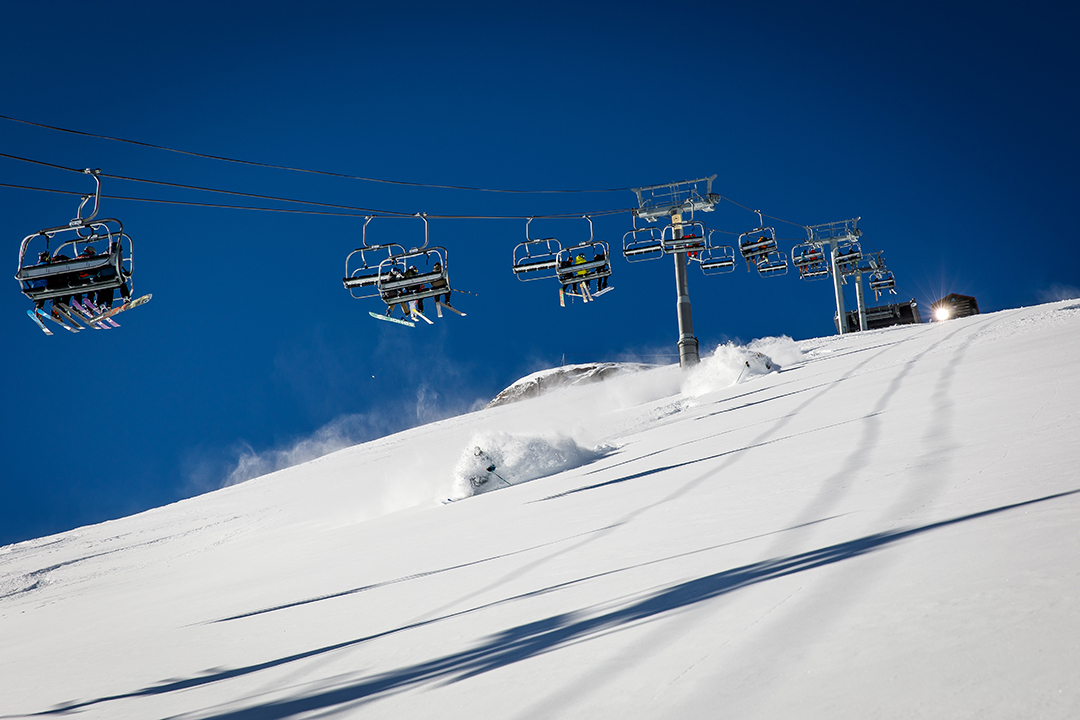 To truly experience Telluride, Colorado you must embrace feeling small—minuscule, actually. The former mining community turned ski town has a way of dwarfing and humbling you. And it can all start with a hair-raising flight into Telluride Regional Airport (TEX), which rests at an elevation of 9,078 feet, making it the highest commercial airport in North America. If you’re a true adrenaline junky, you may even enjoy touching down into Telluride while a formidable winter storm infiltrates the region, something I experienced firsthand in late February.

After some doubt that we’d be able to land in Telluride due to the weather, our 19-seat turbo prop plane broke through the dark gray clouds revealing a snow-covered valley floor below and towering peaks with capes of white in every direction. We passed the rounded summits of Last Dollar Mountain and Whipple Mountain to the left, the foreboding, razor sharp pinnacles of the San Miguel sub-range—home to three of the state’s 58 fourteen-thousand-foot mountains—to the right while the steep ribbons of Telluride Ski Resort rested in the background.

The small plane rumbled through the air and descended toward the uplifted, cliff-riddled plateau masquerading as a runway. It seemed each of my fellow six passengers on this flight were holding their breath in anticipation of landing. The plane rocketed toward Deep Creek Mesa and with a thunk landed safely upon the seemingly microscopic landing strip, inducing the echo of a collective sigh of relief throughout the chamber. The storm continued its approach from behind, while the world-famous terrain of Telluride awaited in front. 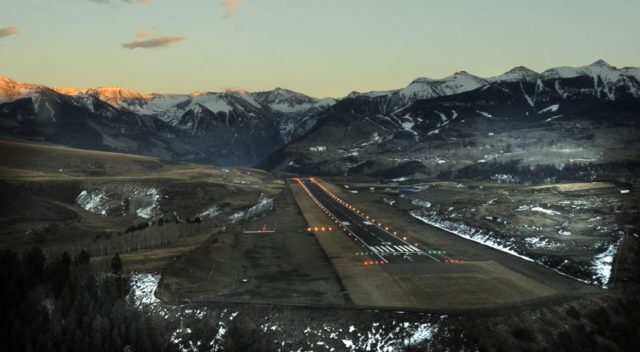 From the comfort of the Hotel Telluride—a cozy, boutique lodge on North Cornet Street—I watched as snow dropped in buckets upon the box canyon containing the town of Telluride and its surrounding mountainous amphitheater. As night fell and the forecast predicted 24 hours of precipitation, it was clear that the next few days would be straight out of a powderhound fairy tale. And when the sun rose, the resort reported 14 inches of fresh snow since closing bell.

Some will say that storm skiing is the best type of skiing. While visibility is low and oftentimes certain terrain remains closed due to patrol work, ski lines are refilled with fresh snow after each run, ensuring deep turns with every lift ride. That was just the case during this particular storm in Telluride.

“While there’s a sense of urgency to get up the mountain and back down again, nobody has a negative nerve in their body on days like that,” explains Lindsey Mills, content and communications manager for Telluride Ski Resort. “The game plan formulates when you’re sitting on the chair, looking at the terrain in front of and below you. Then, you realize it doesn’t matter because the snow is falling at an astounding rate and your tracks will be covered well in advance of your return to that run.”

Our game plan was fluid, indeed, and while patrol worked vigorously to open the upper mountain terrain Telluride is famous for, our crew lapped the evenly spaced, moderately pitched trees off the Polar Queen Express chair. The snow was so deep on the lower reaches of the mountain it was like our legs were the hulls of ships pushing through the deep ocean.

While the peaks were shrouded in clouds, they were still omni-present and watched over the powder frenzy below them. It felt like some celestial power was judging our every track from high above. And each startling detonation heard from the upper terrain indicated that we were getting closer to uncovering the richest treasures of the storm. And on our fourth ride up Polar Queen, we saw the crowd forming at the Prospect Bowl gate and knew it was go time. 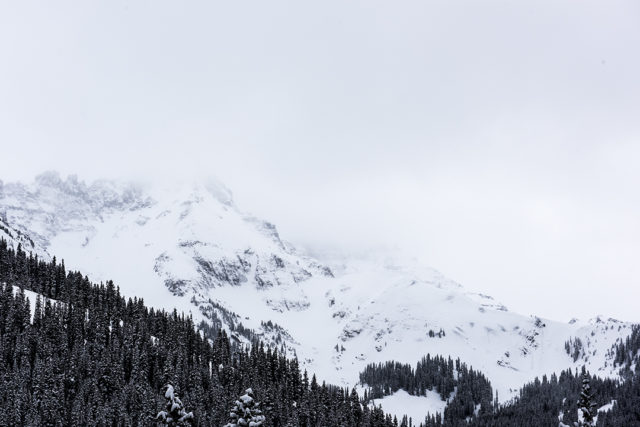 When patrol gave the green light to the ravenous horde of skiers, the race was on. We flew down Lower Dynamo to the Gold Hill Express chair and took the four-minute ride to the top. We dropped under the lift and were greeted with bottomless, leg-burning turns down Claude’s Couloir—a narrow corridor flanked by spiring rocks on the right and steep glades on the left.

Back at Gold Hill Express, there were rumors that patrol was preparing to open the first leg of the Black Iron Bowl hike-to terrain off of Prospect Express. After a quick lift ride, We huffed and puffed to the end of Prospect Ridge (patrol had yet to clear terrain into Black Iron Bowl) and bombed down Genevieve, a diving shot nestled up against a Jaws-like fin of rock.

To finish the day, we retreated to the Plunge Lift on the furthest reaches of the skier’s right side of Telluride. The lift overlooks the victorian buildings of the town of Telluride and is a local’s favorite, providing access to seemingly near-vertical, quad-busting runs like Kant-Mak-M, Spiral Stairs and Plunge (link ’em together to really enter the pain cave). With plentiful snow still blanketing the trails, it was an ethereal way to end the day. The total at the end of the storm was 22 inches. 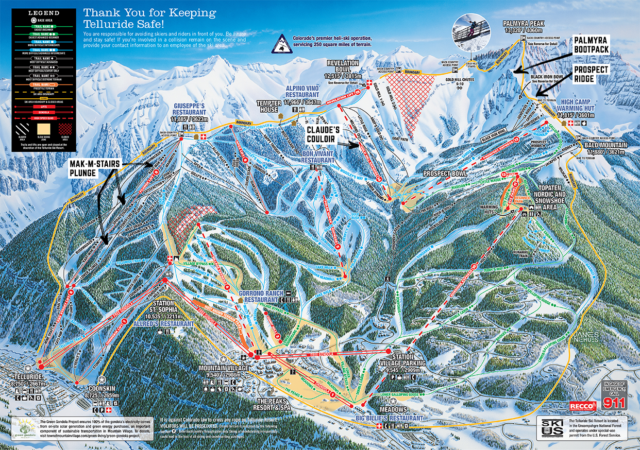 While storm skiing in Telluride was a surreal experience, the real prize was awarded when the clouds parted and the sun emerged. With the improved visibility, it was apparent that even the town of Telluride is dwarfed by the sheer size of the mountains that form its borders. What was revealed when the sky popped blue was a coiled canopy of toothed mountain tops that wrap around the town like the tail of a mighty dragon. And up on the mountain, the first glimpses of Telluride’s famous 13,320-foot Palmyra Peak and its 1,500-plus vertical foot bootpack were unveiled. 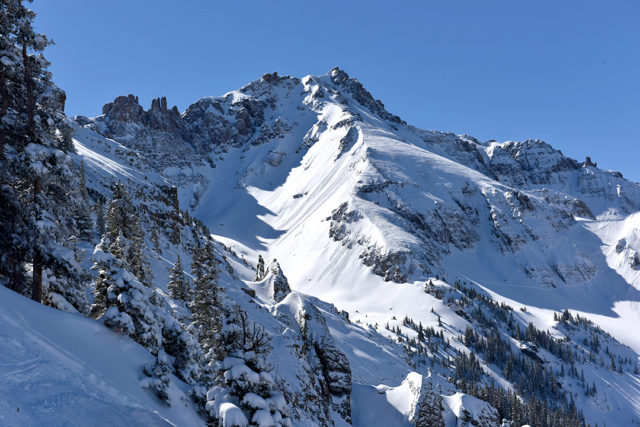 “Hiking a 13,320 foot mountain within the boundaries of a ski resort? It’s unheard-of,” says Mills. “Appreciating your size in the world as you hike high above the lift-accessible terrain, you feel you’re among giants as you realize the grandeur of the peaks surrounding you.”

The line in front of the hike-to gate grew to 25 strong by the time we arrived. After a short wait, patrol dropped the rope and the march up Palmyra began. Even from afar, the serrated pinnacle of rock brought about fluttering stomach butterflies from its sheer grandiosity. After a 25-minute left foot, right foot shuffle, we reach the boundary of Black Iron Bowl. While the mob continued the trek to the top, time constraints forced us to suit up and ski down. An additional 30 to 40 minutes of hiking would’ve deposited us on top of the imposing Palmyra Peak, which holds some of the most formidable in-bounds terrain in the country. Chutes like Roy Boy, Senior’s and Tram Shot that’ll pucker you up quicker than a sour apple Warhead candy. 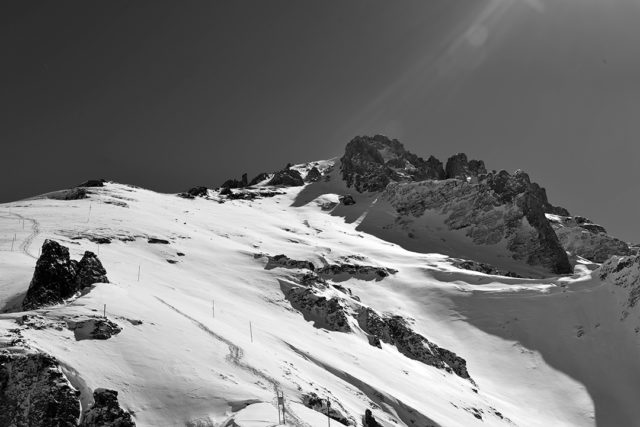 “Standing atop the Peak gives you a jaw dropping view of the San Juans,” explains FREESKIER contributor and former Telluride local Paddy O’Connell. “You can’t help but smile. And then you look down Senior’s and its 40-plus-degree drop-in and that smile can easily turn into a concerned grimace. The peak is a true skier’s dream line—skiing big, technical, steep terrain is one of the most exhilarating and rewarding experiences a skier can have… and it’s inbounds for crying out loud.”

Alas, Palmyra would have to wait for the next adventure. Instead, our avenue for descent was Dihedral Chute, a wide fall line vein that held copious amounts of white gold leftover from the storm. Not a bad consolation prize. 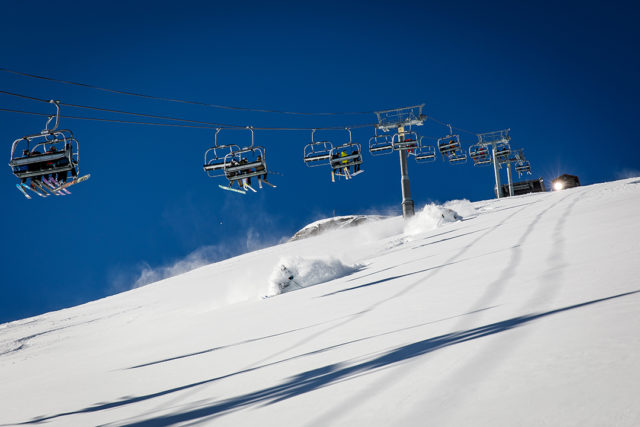 If there was any takeaway from Telluride as my departing flight ascended toward the sky from Deep Creek Mesa—besides the two-and-a-half days of dreamy turns—it’s that Telluride is big, and I am small. 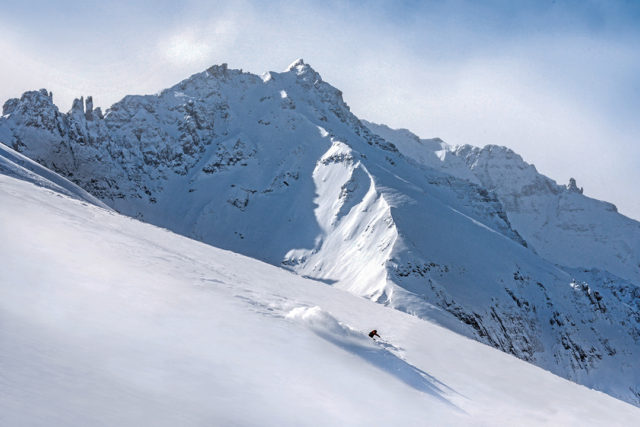 Amplifying Telluride: The gem of Colorado is kicking it up a few notches