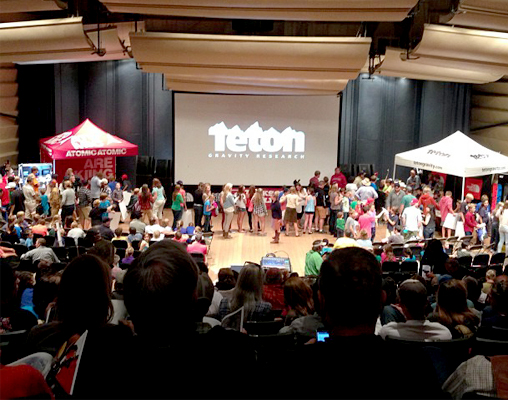 If there’s one thing I’ve learned from the past few years, it’s if you really want to burn through some posters, set up next to someone well-established and just handle their overflow. Looking around the stage at Walk Festival Hall in Teton Village, I eye up my target. Sage? Nope, he’s surrounded by Atomic brethren, plus he has, like, three posters, all better paper stock than mine. Durtschi? Since we took last place in the golf tournament the other day, probably best I avoid him. Sammy? Yahtzee! Open seat, right up front next to the speaker.

I may have the loudest seat in the house. The only way it could be louder would be if I were somehow sitting in the sub woofer. The groms lining up are all plugging their ears because we’re essentially in the front row of a damn Kiss concert. I misspell every other name: “Tate” becomes “Jake,” “Tim” becomes “Jim” and I don’t get “Emily” right all night because apparently there’s, like, five ways to spell it.

During a lull I do some wandering back stage and find the giant Co-Lab cheque. I can’t help myself. I do a quick glance over my shoulder, take a peek and make a mental note to congratulate Dale later—preferably when he’s within arm’s reach of the bar.

Autographs wind down and it’s finally time for my favorite part of the night: throwing out free gear. There’s nothing better than finding the most pumped kid in the crowd, lining up a throw, and seeing the smile on the face of the person sitting next to him or her when you completely miss. Sorry buddy!

And finally, after months of anticipation, the lights dim and it’s time to see what made the cut. Just like most everyone else in the theater, this is the athlete’s first glimpse of the flick. A (very) loosely run fireworks show somewhere in Alaska sets the tone. Being a big fan of loosely run firework shows, this gets me excited.

Sage opens up the movie and shows why he’s one of TGR’s marquee athletes, as well as why he’s one of the best AK shredders out there. He charges so fast and confidently, it makes me wonder if people realize just how hard what he’s doing actually is.

Moving to Canada, Dana, Dylan, Dash, Angel and Durtschi show what Southern BC is known for—pillows and pow—as well as some rowdier big-mountain action. Dash punts a massive left side three off a cliff that would be worthy as a straight air.

Always a crowd favorite (I wonder why?), the Jackson segment gets the crowd pumped. Up-and-comer Daniel Tisi kicks things off with an adult-worthy line in Casper Bowl and a collection of flat threes and cork sevens. I don’t know what I was doing at 14, but it wasn’t that. Born and raised local Max Hammer follows Daniel, displaying why he’s arguably one of the most comfortable people on skis out there.

Spriggs, Ligare and I spent a good chunk of the season exploring several other mountain ranges that surround Jackson. These zones have seemingly limitless potential: the one zone that was featured just barely scratches the surface. Also, Exum guide Zahan Billimoria and I shred the Middle Teton. Although it’s hard to tell, the snow was super funky. I’m just glad they ended up using the more generous angles.

Colter, Dylan, Sage and Durtschi get by far the deepest powder in the film in Fieberbrunn, Austria and Colter solidifies himself in ski movie lore thanks to some all-time narration. More than gratuitous powder, booters and lines, the segment proves why Austria has its place in skiing culture.

Onsite in Mammoth, Sammy and the US Freeskiing Team throw down for an impressive booter session with an Olympic undertone. I might not be able to call out every trick first try, but I have the utmost respect for anyone trying, slamming, and getting up and trying again.

Fantasy Camp, the fruition of TGR’s dream of setting up a remote village in the Alaska wilderness, with the sole purpose of exploring areas of the Northern Chugach, anchors the rest of the flick. Dana, Ligare, and Angel ski lines like the snow owes them money. McIntosh makes a triumphant return to the silver screen after an injury-plagued season in 2012. It seems like he hasn’t missed a beat.

Finally: the closer, which I’ve had a hunch about all through the film. Despite being an absolutely horrible golfer, Durtschi makes up for a lack of driving skills, short game and putting with some face melting Alaska lines, butters off of cliffs and no shortage of tricks off of natural features. While a PGA tour card is definitely not in his future, I’m pretty sure the skiing thing is working out for him.