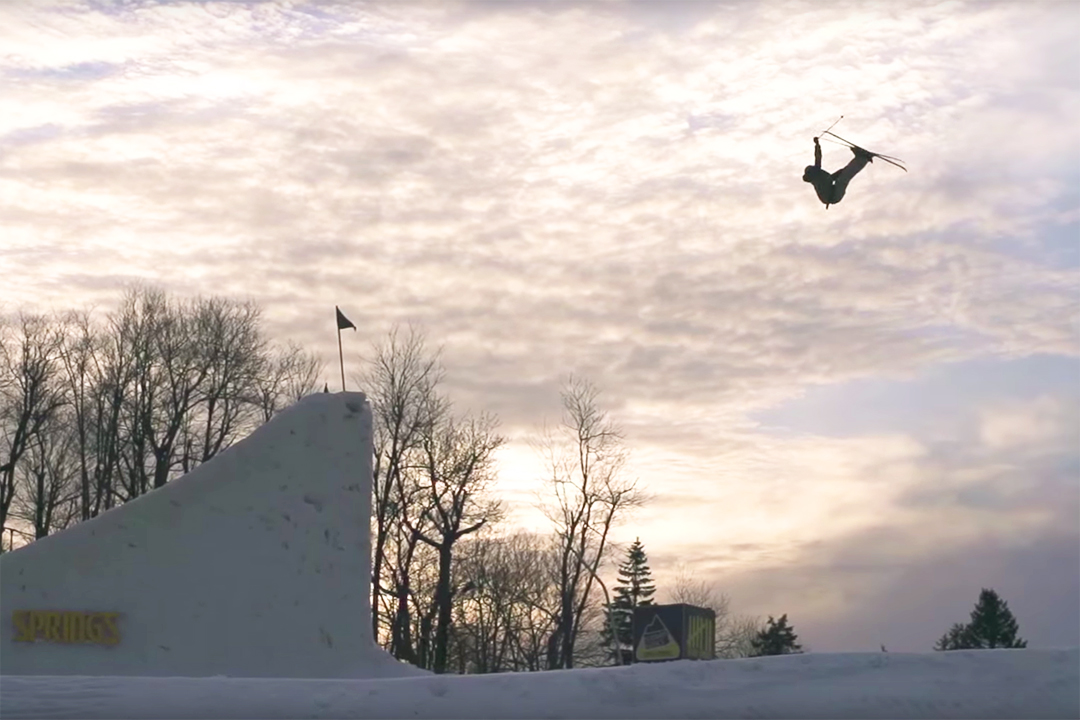 Tom Wallisch reps his hometown of Pittsburgh, Pennsylvania as often and as hard as possible. A fan of each of the city’s major sports teams (Penguins, Steelers, Pirates), the 28-year-old freeskiing icon has created a cult-like following of his own among the action sports community—thanks in part to his flawless landings and unmatched style. Earlier this year, Wallisch and his Good Company crew visited his home state for a good old fashioned terrain park throw down at Seven Springs Mountain Resort. Today, with the release of episode Two of Good Company on the horizon, Wallisch brings us a sneak peek of exactly what went down on the slopes of Pennsylvania, as well as the announcement of his new partnership with Seven Springs. We caught up with T-Wall this morning to get the nitty gritty on his latest deal. Get the scoop below.

Note: Good Company Two is set to take the Internet by storm on September 1. Pre-order your copy for just $5.99 today.

Back in the burgh. Let's go Bucs!

How’s it going Tom? Where are you currently?

Going great. I’m in Park City at the moment enjoying some summertime hanging. Nice to get some boat time and rounds of golf in. Fun stuff.

First things first: Good Company Two is dropping next week. Any dirty details you’d like to share with us before it goes live?

All I can say is that it is definitely the best piece of ski videography I’ve ever been apart of. The crew crushed it this year and it shows. It was really fun to have a say in everything from shot selection, editing, music, etc. This video shows the variety and creativity of our crew so well. I’m pumped… I’m really excited to put out a bunch of free edits and behind the scenes footage, as well. We’re trying to make it as cheap and sick as possible for kids. This episode is almost thirty minutes long and only five bucks compared to the other movies out that run almost $12.00 online. We want to keep doing films and make the footage as accessible as possible. I hope the kids are stoked.

Tell us about the park shoot at Seven Springs. How’d it all go down?

It was amazing. Seven Springs rolled out the red carpet for us. They built us some really sick features and were always down to shape and help with anything we needed. I think the whole crew had a blast and it was awesome to end the season on such a high.

So, you’ve announced today that you’re partnering with Seven Springs. Did these discussions come about prior to the shoot, or were they born of the collaboration you guys enjoyed amid the shoot?

These discussions came about throughout the whole season. Seven Springs and Pennsylvania in general have played a huge part in my career and growth as a skier. What Seven Springs has been doing as a resort is amazing. Promoting and building such a huge park scene on the east coast is so cool. I really wanted to be a part of that movement and help bring some exposure to PA and where I grew up.

Are there any individuals you can point to who are responsible for steering things in this direction?

Almost everyone I’ve met at Seven Springs is so excited and pumped on the park scene. It’s amazing. Alex Moser, Joel Rerko, Joe Genovese, and all the boys on park crew at Springs are awesome.

How might you work with them to affect the direction of the parks going forward?

I’m hoping to just visit Seven Springs more, film more edits there, and do more photo/video shoots there. The east coast is so sick for park skiing and I want kids to know they can grow up there and make it as a pro skier.

What does it mean for you to represent a resort from your home state of PA?

It’s so cool. Seven Springs was the closest resort to me growing up in Pittsburgh and it’s awesome to come full circle and have them as my resort partner now.

How often might we see you back there enjoying some good ol’ eastern shred?

Hopefully a few times every year and definitely every spring for some more epic shoots with the Good Company crew.

What are your plans for the coming season?

Ski and film a ton, shred some pow, slide some rails. Just have lots of fun.

Can we expect to see you on the competition circuit this year?

Hopefully. I’m still planning out which and what events I’ll do or still want to do. We’ll just have to wait and see. I definitely want to focus mostly on more ski films with Good Company.

Any advice to all of the kids out there looking to make the next big web series in skiing?

Work hard, put in the hours and above all have fun out there. Let that fun and hard work show in your videos and people will enjoy. I sure know I will. I’ll be watching.

Related: Round two of Tom Wallisch’s Good Company is coming